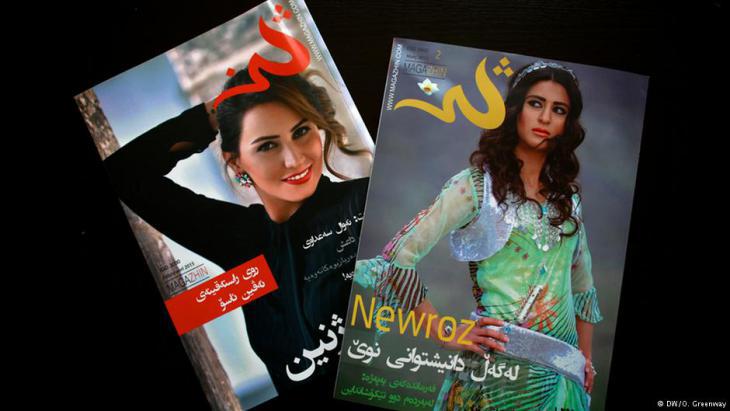 A number of female journalists in Iraqi Kurdistan are shaking up a male-dominated domain with a magazine that aims to highlight the problems and abuse many women still face. They are reporting on women's success stories and addressing controversial issues such as female genital mutilation. Melissa Tabeek visited the editorial team in Sulaymaniyah

In a sparsely decorated but chic office space in the northern Iraqi city of Sulaymaniyah, a group of Iraqi Kurdish women are finishing up final drafts of articles, creating publishing schedules and reviewing photos. Editors Koral Noori and Alaa Lattif debate content, while Tafan Najat works on fashion and beauty stories. With the editor-in-chief set to return to the city later that evening, they are preparing the third issue of "Zhin" magazine, a special on marriage, to go to the printers. The three are excited, as the layout has been improving with each issue, they say.

"It is very important to show readers and society what is happening with women here in Kurdistan. They are facing violence, different kinds of abuse, stress, but no one is worried about showing this kind of situation. For us, for "Zhin" magazine, every one of the different parts of women's lives are very important," says Lattif. 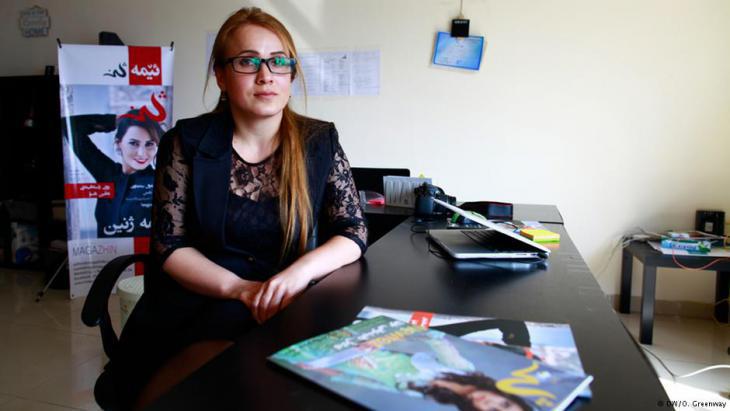 "It is very important to show readers and society what is happening with women here in Kurdistan. […] For us, for 'Zhin' magazine, every one of the different parts of women's lives are very important," says Alaa Lattif, editor at the women's magazine "Zhin" (pictured here)

From beauty and lifestyle to refugees and social issues, every story and every photo in "Zhin" magazine ("zhin" means woman in Kurdish) is produced by women for women, and the operation is managed by women. Working in the conservative society that is Iraqi Kurdistan and in a city just over 100 kilometres from the frontlines where Kurdish Peshmerga forces are fighting "Islamic State" (IS) militants, what this group of female journalists is doing is a first.

"Kurdistan is a pretty conservative society, not in its religion, but its culture. Women really have an underprivileged role. [Somehow] much is changing, you see economic growth, shopping malls and buildings, but you do not see a change in the mentality. Women still find it hard to find their voices and be heard," says editor-in-chief Brigitte Sins, who works with the NGO International Media Support (IMS).

"'Zhin' is pretty unique. The independent media sector is small. There are a few women's newsletters but it does not have the same effect. Things that are made by women are not respected or seen as professional here," she continues.

The magazine is part of a project supported by IMS to publish two magazines, "Zhin" in Kurdish and "Iraqiyat" in Arabic. "Zhin" targets Kurdish women, while "Iraqiyat" focuses on all women in Iraq, but the content of both focuses on and is created solely by women. 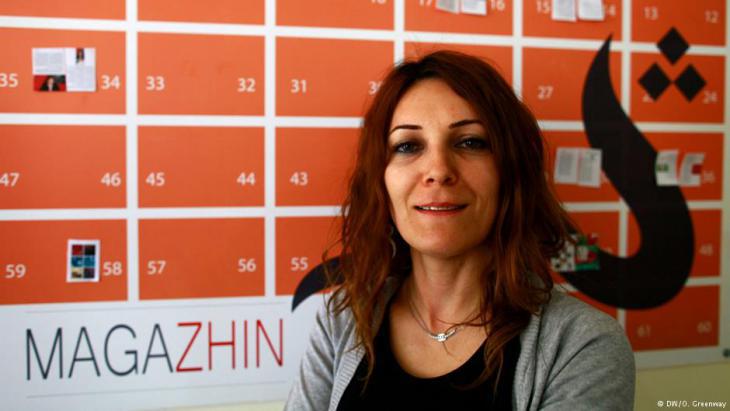 According to Koral Noori, editor at the women's magazine "Zhin" (pictured here), although some things have changed for the better for women in Iraqi Kurdistan, many people in society do not accept the fact that women work as journalists

Rising to the challenge

The process of finding trained Iraqi Kurdish female journalists presented the first of many challenges when putting together a team that would be capable of producing a high-quality glossy publication. Sins says it was down not only to a lack of journalism skills because of the scarcity of development opportunities for female journalists but also to the small pool of women who are also able to work independently without the burden of social constraints.

"A lot of female journalists are not allowed to travel by themselves or to work in the evening hours or work in an office dominated by men where they are supposed to play the same roles as men. The ones who get through that, they are really the tough ones who are willing to set aside their family life. They choose work over family and it is quite something. If you choose to be a female journalist in this country, it can mean you lose your family. It is quite a radical decision, so it is not even the dangers of working on the front lines, but it has such an impact on your social life and your status in society," Sins explained.

Conservatism coupled with a media industry dominated by men means creating a sustainable, independent magazine that addresses women's issues is no small feat. Koral Noori is one of the editors of the magazine and host of a debate show that focuses on economy and politics on Kurdish News Network (KNN). She says that although things are better now for women than before, the profession is still not accepted by many in Iraqi Kurdistan's society, and the opportunities within the industry are limited. But worse than discrimination, says Noori, are harassment and even death threats that have made her work more difficult since she began in 1997, a time when there were few women in the profession.

She mentions a case about an honour killing, where a man had killed two sisters. She and a colleague wrote a story about it, and the man sent her a letter from prison threatening her life. "For more than a month and a half, we went home early, we did not go shopping, we did not stay at work a long time because we were afraid. We were young girls, younger than now, we were afraid that if he killed two sisters, he can kill us too," she says. 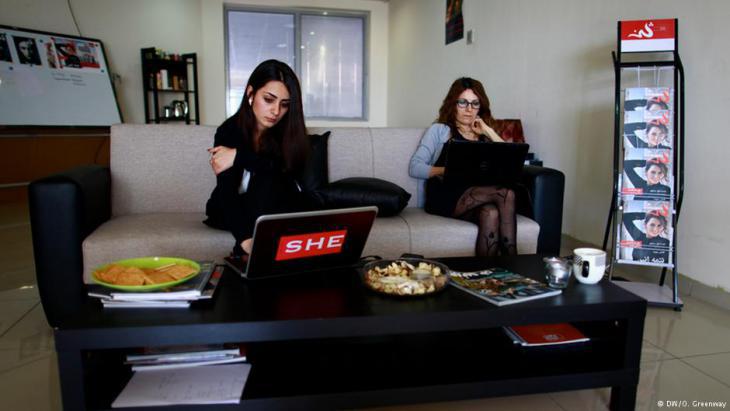 For women, by women. All of the women who work at "Zhin" and "Iraqiyat" magazines see the publications as a motor for change. They want to use their stories and the magazine to build a network and a platform to bring together activists and push civil society forward

Pushing boundaries one at a time

The goal for "Zhin" magazine's staff is ambitious and it begins by testing one boundary at a time, striking a balance between celebrating women's positive stories, such as the stories of successful entrepreneurs, and pushing the envelope with harder and more controversial topics, from female genital mutilation – a widespread practice throughout Kurdistan – to purchasing lingerie, a simple act that remains taboo for most women.

But crossing the line editorially is only one part of it. According to Sins, Lattif and Noori, just the fact that they have an office where only women work is already out of the ordinary. When you add the fact that the magazine has pictures of beautiful women on the cover, you are saying something without even opening the magazine, says Sins.

All of the women at "Zhin" and "Iraqiyat" magazines see the publications as a vehicle to drive change not only with their stories, but using the magazine to build a network and a platform to bring together activists and push civil society forward. Sulaymaniyah, a city known in Iraqi Kurdistan for having the most socially active community, is a good place to start, says Noori.

Sitting on the couch in the magazine's office, Noori says that the magazine will bring change, regardless of the culture of extremism that they witness on a daily basis.

"We want change, how can we change if we are afraid? Really, when you are in the situation you feel afraid or scared. But when you think, 'I need to change my society', there is also a cost. If I am a female and I feel what other females in our society feel, their suffering and how the traditional norms and the law are, if I do not do anything for them, who will?"

November 2022 sees the Arab world firmly in the spotlight with the COP27 in Egypt and the FIFA World Cup in Qatar. Public trust in MENA governments is weak, thanks to their ... END_OF_DOCUMENT_TOKEN_TO_BE_REPLACED

Thanks to climate change, the Middle East is heating up faster than any other part of the world, putting the region's ancient pyramids, castles, holy and other heritage sites at ... END_OF_DOCUMENT_TOKEN_TO_BE_REPLACED

In the run-up to the COP27 global climate summit, hosted by Egypt in November, it is worth noting that little rainfall, aggressive heatwaves and worsening drought make the Middle ... END_OF_DOCUMENT_TOKEN_TO_BE_REPLACED

Hundreds of porters, locally known as ‘kolbars’, cross the mountainous border between Iran and Iraqi Kurdistan all year round. With Iran’s economic crisis deepening, ever more ... END_OF_DOCUMENT_TOKEN_TO_BE_REPLACED

Once again, political deadlock is driving thousands of Iraqis to Tahrir Square. They want new elections, but the parliament refuses to dissolve. Elected representatives are now ... END_OF_DOCUMENT_TOKEN_TO_BE_REPLACED

The clashes in Baghdad between supporters of Muqtada al-Sadr and pro-Iranian militias show that an intra-Shia power struggle is in full swing. An analysis from Cairo by Karim El- ... END_OF_DOCUMENT_TOKEN_TO_BE_REPLACED
Author:
Melissa Tabeek
Date:
Mail:
Send via mail

END_OF_DOCUMENT_TOKEN_TO_BE_REPLACED
Social media
and networks
Subscribe to our
newsletter