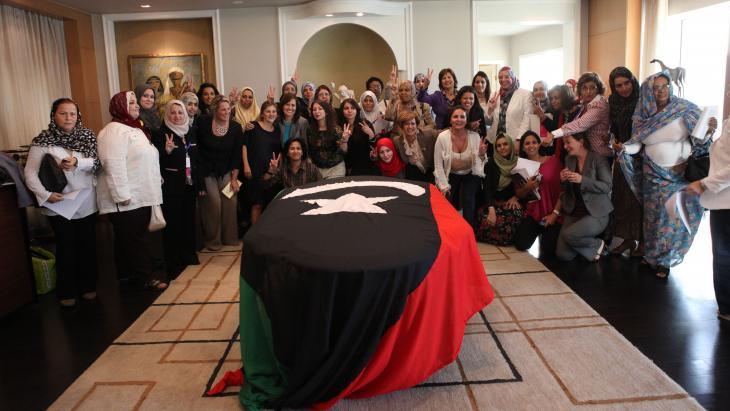 Women's movements in the transitioning Arab states
For dignity, peace and equal rights

Despite all the setbacks suffered by many women's rights groups in the transitioning Arab states, regional co-operation has improved considerably over the past few years. Juliane Metzker takes stock

The radical changes in the Arab world mean women's rights groups face the major challenge of campaigning for both equality before the law and political democratisation simultaneously. The Cairo-based non-government organisation Karama has created a platform on which the region's activists can engage in debate.

Somali-born Hibaaq Osman, a member of the Committee of the Arab League for Women, Peace and Security, founded the organisation back in 2005. "We recognised that women are now at an increasing disadvantage as they are still the victims of economic, social and political discrimination. Karama wants to end this form of structural oppression," she explains.

Since its foundation, the organisation has expanded its network and now supports movements across North Africa and the Arabian Peninsula. It assists groups working on legislative measures, among other issues. The co-operation usually begins with an invitation to Cairo for the activists. This has led to various projects, including platforms for peace involving Syrian, Libyan and Yemeni women, but also male women's rights activists.

Change as a caesura for women's rights movements

"The revolutions in the Arab world have opened up many new possibilities for women. Women have been familiar with various forms of protest for some time now; they know how to make demands, because their struggle had been going on longer than that of society as a whole," Osman notes when talking about the role of women in the Arab revolutions over the past three years. "Governments that have been established for some time tend to be more rigid and restrictive with legislation. The recent changes have set a lot of things in motion. That gives women the opportunity to take political action on their own issues." 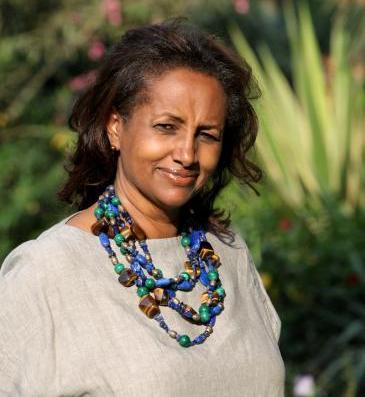 "Women have been familiar with various forms of protest for some time now; they know how to make demands, because their struggle had been going on longer than that of society as a whole," says Hibaaq Osman, founder of Karama

That being said, women activists in transitioning Arab countries still have a long way to go before their rights can be anchored in law and put into practice. The members of the Libyan Women's Platform for Peace (LWPP) know this only too well.

The co-operation between Libyan women's rights groups and Karama began three years ago. Back then, some 25 women, including academics and media representatives from various regions of Libya, came together in Cairo. The result was an influential network that "promotes and demands women's inclusion in political decision-making processes," says Zahra Langhi, chairwoman of the LWPP.

Thanks to the movement's lobbying activities, 33 seats in the General National Congress, Libya's highest legislative body, went to women for the first time in the country's first free elections for 52 years. Nevertheless, these women still have relatively little political influence. "Some of them have been threatened by male congress members [...] and excluded from the political discourse," Langhi explains.

"Worse than under Gaddafi"

In a bid to stabilise the security situation in the country, the LWPP is campaigning for the disarmament, demobilisation, re-socialisation and reintegration of armed militias. "The situation is worse than under Gaddafi: women are being kidnapped, they're not safe in public spaces," emphasises Langhi. In view of the rise of extremism in Libya, women are even afraid that they might lose the rights they have had since the Gaddafi era. "We want to make peace. To do so, the weapons have to be confiscated," continues Langhi.

Subjects like human rights and women's rights have not yet been tabled in the sessions of the General National Congress. Langhi therefore regards it as a central omission that the LWPP focused its energies so strongly on the drafting of the electoral law in 2011.

The situation in Syria is very different. There, the focus of the Syrian Women's Platform for Peace (SWPP) is on bringing international women's rights conventions into force. After all, Syria has signed the UN Convention to Eliminate All Forms of Discrimination against Women (CEDAW). The SWPP is scrutinising equality policy in the country in the light of this fact.

"If the position of women is not strengthened, there can be no democratic process," says Mouna Ghanem, the former chairwoman of the Syrian Commission for Family Affairs and now co-ordinator of the Damascus-based SWPP.

Women's rights activism in the shadow of civil war 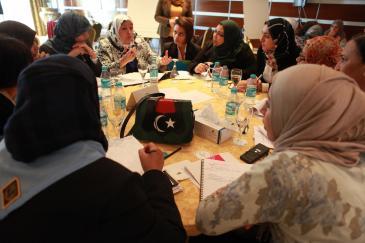 In November 2011, Karama and the LWPP organised a seminar on women in political decision-making processes in the Corinthia Hotel in Tripoli

Despite the past three years of violence in Syria, it is important to the SWPP to continue its work inside the country. "I don't think anyone outside Syria really understands the situation in the country. From abroad, you can never be sure you're actually supporting the right groups. That's why we have to work from here," says Ghanem.

There were numerous differences of opinion on this issue within the organisation in 2011. According to Ghanem, many activists were initially keen to support the opposition's protests against the regime. It was not until 2012 that they could be convinced to focus on women's interests in Syria.

Since then, the platform's activists have discussed subjects such as gender equality and international women's rights conventions at seminars. Apart from that, they offer training programmes, mainly for young women and those starting out in their careers. The events are attended by women from Aleppo, Latakia, Homs, Deraa and many other Syrian towns and cities. Through the co-operation with Karama, the SWPP has doubtlessly profited a great deal from the experiences of the Libyan and also the Yemeni women's movement.

"Karama" means "dignity" and is an international NGO based in Egypt. It campaigns for women's rights and an end to violence against women in the Arab world. It has offices in Sudan, Lebanon, Syria, Jordan and the countries of the Maghreb

In Yemen, the women's movement is calling for a civil, modern, democratic and secular state, which means it has to oppose extremist forces. Just how dangerous this work is in the country at the southern tip of the Arabian Peninsula was recently documented in a study by a Yemeni women's rights organisation. In the period from December 2013 to January 2014 alone, it registered 59 cases of politically motivated violence against women, five of them resulting in death.

Emad al-Garash, a member of the Yemeni Organisation for the Defence of Democratic Rights and Freedom, confirms: "Extremists threaten us because we speak out in favour of the abolition of the death sentence, women's rights and equality. They claim we are acting against Sharia and we are infidels. That makes our work very dangerous." Despite the high risk, the organisation is trying to take its activities out to rural areas as well, where radical Islamist organisations are very influential.

During what was called the National Dialogue Conference, which followed the resignation of the long-standing ruler Ali Abdullah Saleh, one of the resolutions was to introduce a quota of 30 per cent women in political decision-making processes. While Al-Garash regards this as a major success, it is still unclear how the resolution will be put into practice.

Despite all the setbacks, Arab women's rights activists refuse to be discouraged. "Women have now recognised their political, social and economic value to society," says Hibaaq Osman. They began working actively for their rights before the political changes in the Arab world. Since the outbreak of the Arab revolutions, however, co-operation between the organisations has increased – and along with it the exchange of experiences among women activists, which undoubtedly gives them added strength and encouragement for their continuing struggle for freedom and equality.

Tourists have been returning to Tunisia, Egypt and Morocco. But, given the global uncertainty caused by the Ukraine war, will the comeback be enough to save a struggling sector, ... END_OF_DOCUMENT_TOKEN_TO_BE_REPLACED

In this essay, renowned Lebanese journalist and writer Hazem Saghieh asks whether the Arab Levant, which stretches from Iraq in the East to Egypt in the West, will remain an ... END_OF_DOCUMENT_TOKEN_TO_BE_REPLACED

By 2050, the Middle East and North Africa could be dealing with many more elderly people suffering from dementia. A lack of facilities, specialists and local knowledge means the ... END_OF_DOCUMENT_TOKEN_TO_BE_REPLACED

With his fist bump greeting for a man he previously called a pariah, US President Biden has paved the way for Saudi Crown Prince Mohammed bin Salman's return to the international ... END_OF_DOCUMENT_TOKEN_TO_BE_REPLACED

Foresight is needed to turn the tide of German policy. Being independent of Russia must not lead to dependence on authoritarian regimes in the Middle East. By Kristin Helberg END_OF_DOCUMENT_TOKEN_TO_BE_REPLACED
Author:
Juliane Metzker
Date:
Mail:
Send via mail

END_OF_DOCUMENT_TOKEN_TO_BE_REPLACED
Social media
and networks
Subscribe to our
newsletter