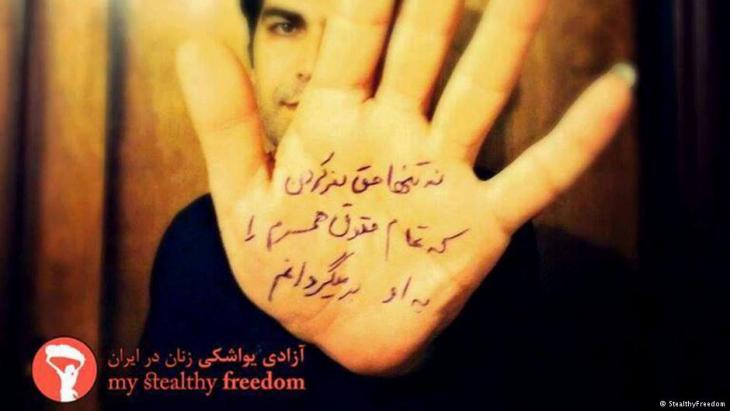 Women′s rights in Iran
"Now it's the men's turn"

The team captain of the Iranian national football team did not take part in the Asian Games staged recently because her husband would not give his permission for her to leave the country. Although the law of the Islamic Republic was on his side, he apparently does not enjoy the support of all the men in his country. By Yalda Zarbakhch

"You are free, my wife!" – "As an Iranian man, I am ashamed of Article 18 of the passport law!" – "Not only do I give my wife back her right to travel, but I also restore all the other rights to which she is entitled." (See lead photo.) All of these declarations were made by Iranian men and have been circulating in Iranian social media such as Facebook and under the hashtag #itsmensturn since the end of September.

The incident that sparked this unusual campaign by Iranian men for women's rights came from the world of sports. Niloufar Ardalan, the popular team captain of the Iranian national football team (″Lady Goal″), was forced to remain at home during the Asian Indoor Championships in Malaysia. And not because she was injured. The real reason lay in a domestic quarrel. Ardalan's husband, the well-known sports broadcaster Mehdi Toutounchi, wanted his wife to be present for their youngest son's first day at school. All it took was for him to appeal to his rights.

According to Iranian law, a husband has the final word on whether his wife can leave the country. This also applies to the right to work, to study, a couple's common domicile, custody rights and divorce. As soon as a woman gets married, she automatically relinquishes all these rights to her husband. The only exception is the pilgrimage to Mecca.  A woman does not require permission from a man to make this journey.

The struggle for women's rights is not yet won

Although the law is now over 50 years old and originates from the time before the Islamic Revolution, it has largely been rendered obsolete by current social realities in Iran. In their struggle against the conservative religious leadership of their country, women have achieved more and more financial and social independence – these days, they even make up over 70 per cent of those attending university. 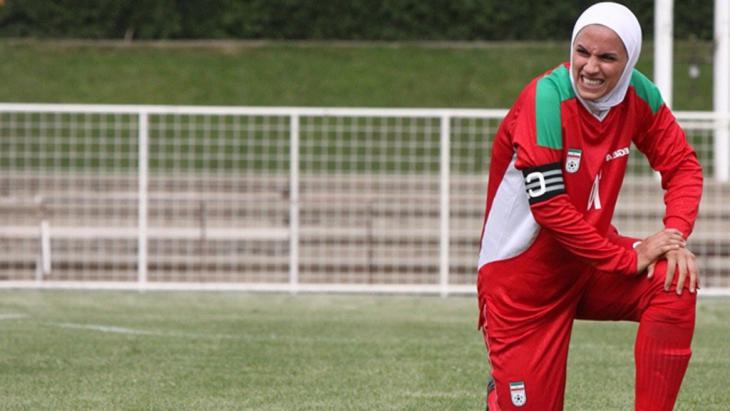 Offside: after her husband refused her permission to leave the country for the Asian championship, the popular Iranian women's football star Niloufar Ardalan criticised the Iranian legal system. It doesn't even guarantee a member of the national team the right to participate in international matches. The team needed her and she was forced to let down her teammates. "I wanted to play for the sake of my country's success in sports, not merely to amuse myself," she stressed

Despite all this, the fight for women's rights in Iran is far from won, says the world-renowned lawyer and human rights activist Nasrin Sotudeh, who was imprisoned from 2010 to 2013 and is forbidden to travel abroad by government decree. "In certain sections of society, such travel bans for women are an everyday occurrence and nobody makes a fuss about it," she says.

It is all the more welcome that "the younger generation is no longer prepared to endure such injustice. It makes no difference whether they are justified ideologically, on the basis of the Islamic Revolution, or under the pretext that men are the dominant sex. There are many young men of this generation who are even prepared to risk criminal proceedings. Some have already been imprisoned and they were willing to pay this price," reports Nasrin Sotudeh.

Stalemate despite the Internet campaign

She is referring here to the various women's and civil rights initiatives that led to the emergence of the so-called "Green movement" in 2009, which protested the re-election of President Ahmadinejad, the predecessor of current President Rohani. The movement was crushed and, since then – for fear of repression – something of a stalemate has set in between civil society and the regime, says the social scientist Kaveh Mozafari, who was himself active in the movement.

He welcomes the current Internet campaign, but remains sceptical as to its effectiveness. "It is all very good to stand up and be counted, but I don't think that the majority of these men would be prepared to pay a higher price than posting their photos on Facebook to bring about real change," he suspects.

It is indeed legally possible to have changes included in the marriage contract before the wedding, thereby restoring all the rights that a woman, according to law, must relinquish to her husband. The responsible registry offices, however, are staffed with officials and clerics who cling to the traditional gender roles and often refuse to register such a modification. 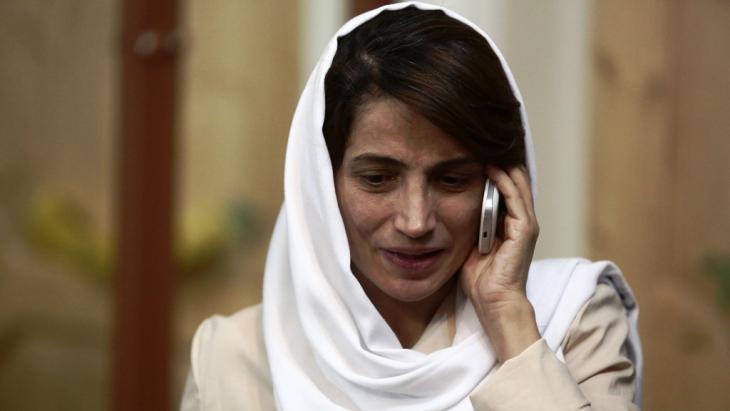 Iranian human rights activist Nasrin Sotudeh: "the younger generation is no longer prepared to endure such injustice. It makes no difference whether they are justified ideologically, on the basis of the Islamic Revolution, or under the pretext that men are the dominant sex. There are many young men of this generation who are even prepared to risk criminal proceedings. Some have already been imprisoned and they were willing to pay this price"

Changes to the marriage contract are possible, but difficult

Kaveh Mozafari is one of the few people who nonetheless succeeded. "First, we had to search for a long time in order to find a registry office that was prepared to make the changes. Then the official had problems with the content of the text that we wanted included. He simply couldn't cope and refused to amend the contract word-for-word. He constantly told me that he couldn't bear the pressure and felt like I was trying to deceive him, and so on." In the end, though, Kaveh and his wife prevailed.

Many women have no idea that the possibility of modifying the marriage contract even exists, says Kaveh Mozafari. And for those that do know, the option is seen as inappropriate under their circumstances or they don't even dare to broach the subject.

Many couples fear conflict with their families before the wedding. In addition, there are still many cases of arranged marriages. "A woman who has undergone what is, more or less, a forced marriage, is worlds away from making such utopian and progressive demands," says the social scientist.

He and Nasrin Sotudeh both regard modifications of the marriage contract as a mere makeshift solution. The situation will only change when the laws are changed. Otherwise, says Kaveh Mozafari, "Men can always force their women back into the kitchen, regardless of how high a position they hold in society."

Home
Print
Newsletter
More on this topic
Photo essay: 50 years of women's voting rights in IranFamily policy in Iran: Children for the revolutionThe Documentary Film ''In the Bazaar of Sexes'': Temporary Marriage in Iran
Related Topics
Democracy and civil society, Gender, Media in Iran, Muslim women, Women in the Islamic world
All Topics

Sufis today are under attack from fundamentalists and modernists alike. At the same time, a new form of Sufism is emerging in the West. By Marian Brehmer END_OF_DOCUMENT_TOKEN_TO_BE_REPLACED

Short movies nominated for an Oscar often don't get wide public attention. But when one is about an Iranian girl seeking freedom from male domination by taking off her veil, ... END_OF_DOCUMENT_TOKEN_TO_BE_REPLACED

World-famous Iranian film director Jafar Panahi has been incarcerated for several months, even though Iran's Supreme Court overturned the verdict against him. Now, he has gone on ... END_OF_DOCUMENT_TOKEN_TO_BE_REPLACED

Young women are driving forward the protests against the Iranian regime, which have been going on for months. Literature provides clues as to why that should be, and why the ... END_OF_DOCUMENT_TOKEN_TO_BE_REPLACED

Visiting the country of her parents, murdered by the Iranian regime in 1998, German-Iranian artist Parastou Forouhar finds a changed society: hopeful, strong and courageous, ... END_OF_DOCUMENT_TOKEN_TO_BE_REPLACED

END_OF_DOCUMENT_TOKEN_TO_BE_REPLACED
Social media
and networks
Subscribe to our
newsletter