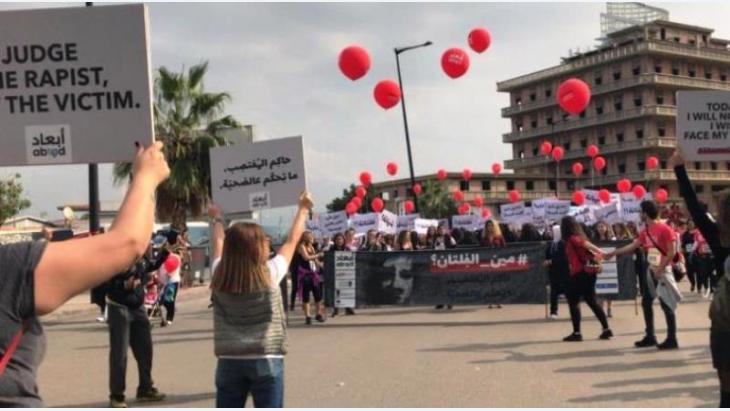 Most abusive and discriminatory acts against women and girls in Lebanon are the direct result of unequal treatment of men and women within the Lebanese law and the influence of a patriarchal society that thrives on the control and oppression of women. By Narod Haroutunian

Since its establishment in 2011, ABAAD – the Resource Center for Gender Equality – has been courageously and creatively testing new approaches to address the issue of GBV and promote gender equality as an essential condition of sustainable social and economic development in the Middle East and North Africa.

As a leading actor promoting gender equality in the region, ABAAD advocates the development and implementation of policies and laws that enhance women's effective participation. As part of a holistic and rights-based approach to advancing gender equality, ABAAD is determined to tackle the root causes of inequality and violence, including gendered social norms.

In 2017, ABAAD's team, comprising dedicated activists, lawyers, consultants, social workers and researchers, celebrated a historic legal step for women in Lebanon, as the Parliament abolished Article 522 of the Penal Code – the infamous "rape-marriage law". This accomplishment was a direct outcome of several national initiatives, including a successful nation-wide advocacy campaign led by ABAAD under the title "A White Dress Doesn't Cover Up Rape – #Abolish_ 522"

Judge the rapist. Not the vicitm

Building on the success of previous campaigns and in a larger effort to address the issue of rape in Lebanon, ABAAD, in 2018, started a nation-wide campaign entitled "Shame on Who?" calling for the prosecution of all rapists and promoting a public opinion that supports the victim instead of shaming her. The campaign was launched during the "16 Days of Activism against GBV" with a social experiment that captured the negative perceptions and attitudes of society towards rape victims.

The experiment, conducted in several parts of Lebanon, shows that many people are ignorant and prejudiced when interacting with a rape victim, choosing to accuse, blame and shame her.

Hence the campaign slogan: "Judge the rapist. Not the victim." In a press release, ABAAD stated: "This type of reaction devastatingly affects the victim's psychological and social well-being and promotes a 'culture of silence and concealment'. Overcoming such problem requires community awareness-raising in order to support victims of rape, demand justice and punish criminals with deterrent penalties."

Ghida Anani, founder & director of ABAAD, explains, "The aim of this campaign is to press for tougher sanctions and accelerate trials against rapists in cases of sexual violence and rape, in particular, and to change social perceptions that stigmatise and shame female rape victims, pushing them to cover up the crime. It also aims to create a supportive public opinion that condemns the act of rape as a punishable crime." She adds, "We urge female rape victims to exercise their rights, by raising their voices and reporting the rapists/criminals, seeking retribution and bringing them to justice."

ABAAD has also used street art to change Lebanese attitudes to rape. The faces of alleged rapists, as described by their victims, went up as pictures on the walls of buildings all over Beirut, sometimes accompanied by recordings of testimonies from the victims.

Another part of the campaign included interactive retelling by actors of the stories of real-life victims of sexual violence. While at the Beirut International Marathon, ABAAD performed a stunt in which women and activists decided not to "run", but break their silence instead, and publicly challenge rapists and all social justifications that defend their acts.

With its strong presence on the ground and in the media, the campaign reached a potential audience of 72 million people. It has by now accomplished one of its main objectives of encouraging more women and girls, who are survivors of rape and sexual assault, to come forward, disclose their cases and seek support.

From the start of the campaign on 6 November until its end in December 2018, 205 women and girls called ABAAD helplines seeking assistance after having reported sexual assault cases. The #ShameOnWho campaign has gained national and international exposure and media coverage. On 20 January, CNN aired a video report about the campaign and particularly the shocking results of the social experiment that had marked its launch on 20 November. The report also highlighted ABAAD's overall efforts to improve legislative frameworks to punish sexual crimes and promote a culture that is supportive, rather than judgmental, of survivors.

Narod Haroutunian is the Public Affairs Coordinator of the Resource Center for Gender Equality (ABAAD). ABAAD – Resource Center for Gender Equality is a UN ECOSOC accredited organisation that aims to achieve gender equality as an essential condition to sustainable social and economic development in the MENA region. The dynamic team is comprised of dedicated activists, lawyers, consultants, social workers and researchers, who creatively test new approaches as part of a larger effort to achieve an equitable society, free of hegemonic masculinities and violence against women. ABAAD has been the co-chair of the National Technical Task Force to End GBV against Women and Girls (alongside the Lebanese Ministry of Social Affairs) since 2012.

Lebanon and Sri Lanka may be a world apart, but they share a history of political turmoil and violence that has led to the collapse of once-prosperous economies bedevilled by ... END_OF_DOCUMENT_TOKEN_TO_BE_REPLACED

With regard to gender justice, things look bleak in the Arab world. Laws typically discriminate against women, while national legislation all too often does not comply with the ... END_OF_DOCUMENT_TOKEN_TO_BE_REPLACED

When times are tough, the exchange of ideas and perspectives becomes especially important. It takes dialogue. And at Deutsche Welle, we need distributors and cooperative partners ... END_OF_DOCUMENT_TOKEN_TO_BE_REPLACED

As the Lebanese economy has collapsed, so has the country's health system. Many medicines have become scarce or unaffordable. Confronted with a failing state, the Lebanese are ... END_OF_DOCUMENT_TOKEN_TO_BE_REPLACED

END_OF_DOCUMENT_TOKEN_TO_BE_REPLACED
Social media
and networks
Subscribe to our
newsletter