Time for a Rethink

Upon first glance, much has improved for women in northern Iraq: almost a third of parliamentarians in Iraqi Kurdistan are female. But the number of honour killings and self-immolations is still high. Mona Naggar reports from Erbil 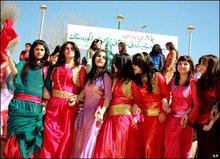 Every reason to protest: The legal status of women in Iraqi Kurdistan still leaves much to be desired, despite numerous new laws and reform initiatives. Pictured: women protesting in Northern Iraq on International Women's Day

​​ Judging by initial impressions, there is nothing to suggest that this well-maintained two-storey villa with garden is any different to neighbouring houses. It's only the policeman stationed outside the entrance that makes you wonder. The women's centre in Erbil, capital of the autonomous region of Kurdistan, is located in a quiet district. It is home to 14 women and girls who came to seek refuge here. Their families suspect them of having relationships with men – a suspicion that puts their lives in danger.

Namam Hassan Rasul is Director of the refuge, and provides some background to the cases: "We sometimes take in girls for the simple reason that they own a mobile telephone. The family therefore assumes that the girl is conducting a relationship with a man. We protect her and try to talk to her parents. In our society the man sees himself as the protector and defender of a woman's honour," she says.

If he kills his sister or daughter, Rasul continues, it doesn't necessarily mean that he is convinced that the woman has committed an offence, or by the custom itself. By killing her, he is fulfilling society's expectations, because otherwise everyone would say he is no longer a man, says Rasul.

There are no accurate statistics on the victims of male violence in the autonomous region of Kurdistan. This is despite the fact that for three years, the newly established interior ministry authority responsible for combating violence against women has been registering all cases reported to police.

But the data is unreliable. Official statistics for the year 2009 report 87 women killed in northern Iraq. Honour killings are not mentioned separately. Another shocking figure is the number of self-immolations, with more than 400 cases recorded in 2009. Women's rights campaigners are however assuming that the number of murders and self-immolations are in fact much greater, as the deaths often occur in the home environment and are not reported to police.

More and more interest has been shown in the issue of violence against women by politics and civil society in recent years. More than 50 organisations are actively campaigning for recognition of women's rights in various regions of northern Iraq. They run women's shelters, conduct information campaigns, offer psychological support and legal advice, call for the abolition of discriminatory laws and the drawing up of new laws to protect women. 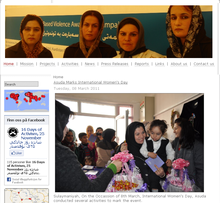 There are more than 50 organisations working to promote women's rights in northern Iraq which campaign against the repression of women. Pictured, the website of the Sulaimaniya-based organisation "Asuda

​​ Kurdish women have indeed seen real change. The parliament for the autonomous region of Kurdistan has banned forced marriage and the marriage of minors. Polygamy has been restricted. The sentence for a man convicted of honour killing cannot be reduced. And there is a parliamentary quota for women, with 30% of seats in the regional assembly are reserved for female MPs.

In spite of all this, there is a sense of disillusionment among many of the social activists. Khanim Rahim Latif has been running "ASUDA" in the city of Sulaimaniya for more than 10 years. This NGO was one of the first organisations in northern Iraq to devote itself to tackling the problem of violence against women. But Latif now has grave doubts over politicians' commitment to reform:

"There's no political participation of women within the parties themselves. The changes we've seen so far are good, but to me they increasingly seem like 'make-up'. We've changed around 28 laws. Sometimes they are applied, and sometimes not," she says.

According to Latif, the region urgently needs to find political, social and economic stability – something it does not have at present. In the event of a woman being murdered, often the matter can be resolved with money. "When the parties campaign for votes in elections, they don't pay much attention to whether laws are being applied or not," she adds.

Iraqi Kurdistan has had a chequered history informed by violence. For many years, the region suffered repression at the hands of Saddam Hussein's Baathist regime. For many years, it fought for autonomy. It wasn't until 1992, after the second Gulf War, that regional elections took place and the Kurdish Autonomous Region was declared.

But the economic embargo imposed by the central government in Baghdad and internal conflict between the two major Kurdish parties the Patriotic Union of Kurdistan (PUK) and the Kurdistan Democratic Party (KDP) impeded any steady development. It was 2005 before the administrative division of the region between the two parties could be lifted. 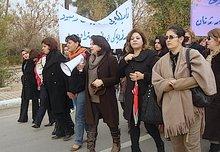 The voices of women demanding their rights in northern Iraq are growing ever louder. But this progressive approach still clashes with deep-seated tribalism in the region, writes Mona Naggar. Pictured: women protesting in front of Kurdistan's parliament in Erbil

​​ Within a short timeframe, Kurdish society in northern Iraq experienced a fundamental transformation. The threat of war was removed, contact with the outside world became an everyday reality and the economy began to grow. But social structures have not been able to keep pace with these developments. Nigar Bakr Rasul at the women's centre "Nawa" in Erbil describes her society as deeply marked by tribal traditions, although one element of that society is now trying to break free:

"In my view social problems have increased. Women are demanding their rights, their freedom. They are changing, they leave the house to go to work, they want to meet people," she says. Such behaviour however is out of the question for many men with traditional views. One indication of this social disharmony is also the rise in the number of divorces, she adds.

The male mindset must change

In a detailed report, Kurdish and English researchers took a close look at the measures introduced to date to promote the rights of women in Kurdish society. The report on the subject of honour killings in Kurdistan and among the Kurdish diaspora in Britain was published in November 2010. The researchers describe the initiatives introduced thus far in the Kurdish Autonomous Region as "a step in the right direction". But they also call for a more robust political willingness to implement reforms.

The report says schoolbooks that continue to perpetuate traditional gender roles must be revised. In addition, programmes promoting the appreciation of human rights and gender equality should be firmly embedded in all state institutions and various civil society groupings.

Summing up how she perceives this future strategy, Namam Hassan Rasul, director of the women's centre in Erbil says: "I think we have up to now got the emphasis wrong. We must campaign for women's rights but at the same time, work to change the mindset of men."

Interview with Mariz Tadros
Contesting the Patriarchal Legal System
Mariz Tadros is an expert in development, gender and participation from Egypt. Martina Sabra talked to her about the importance of legal reform for Arab women and about the strategies of Arab women's organisations to overcome discrimination and gender-based violence in Arab countries

Interview with Ziba Mir-Hosseini
"We Need to Rethink Old Dogmas"
Born in Iran and now based in London, Ziba Mir-Hosseini is one of the most well-known scholars of Islamic Feminism. In this interview with Yoginder Sikand she talks about the origins and prospects of Islamic feminism as an emancipatory project for Muslim women and as a new, contextually-relevant way of understanding Islam

Kurdish-Iraqi Returning Refugees
Spaetzle in Erbil
Germany is home to the largest Kurdish diaspora outside of Kurdistan. But since their temporary "toleration" status is no longer being prolonged many are returning to northern Iraq. A report by Birgit Svensson