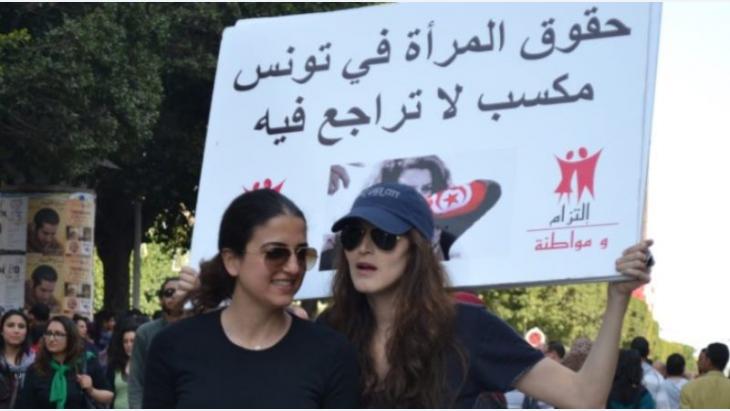 In 2011, the Tunisian people overthrew their authoritarian regime after decades of oppression. The fact that women were at the forefront of this movement was soon noticed by the international community, challenging the widespread preconception of a region devoid of womenʹs activism. By Aya Chebbi

The reality was, indeed, much more complex. Women in Tunisia and the region had been fighting for social change, equality and democracy for more than a century. This decade, however, has seen the emergence of a generation of women who use new means to fight for their rights and face their various struggles.

Since the revolution in 2011, women have been occupying public spaces to organise and stand up for civic causes. In the words of Mike Douglass, however, the mere existence of "a public square, park or other spaces that appear to be civic spaces is not necessarily an indication of opportunities for civil society to engage in political discourse or action."

The dictatorships in the region, such as in Tunisia, Egypt, or Libya, have shown that civic spaces are colonised by the State or combinations of State-private enterprise control. For the civic space to be effective, it also has to be democratic.

The civic space in Tunisia has been overwhelmingly dominated by men, often reducing women to objects of struggle in the face of growing emphasis on Islamic values and customs, such as veiling, on the pretext of safeguarding Tunisiaʹs culture and morals after decades of colonial rule.

Nevertheless, Tunisian women have continued to challenge discriminatory practices, advocate their rights and transition from "objects of struggle" to "speaking subjects". Since the early 20th century, Tunisian women have played a key role in organising civil resistance. In the 1930s, they joined the independence movement, holding protests and signing petitions. In the 1950s, women were fully active in the struggle for liberation, demanding rights and providing logistics and support. 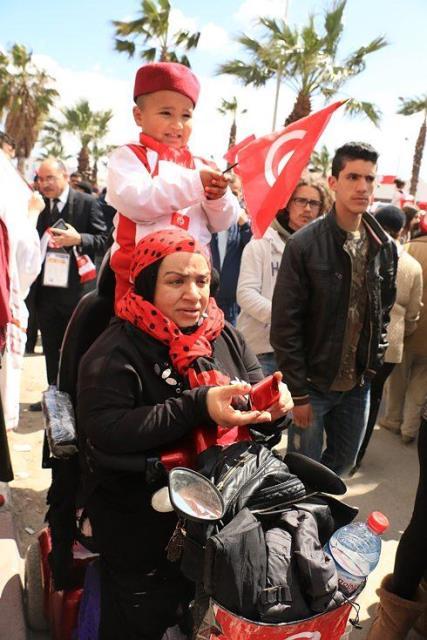 Anti-Ennahda protests: the defeat of the conservative-Islamic Ennahda movement in the 2014 general elections, for example, was possible primarily because large sections of Tunisian society had been gripped by the public debate on women's rights

However, the turning point for Tunisian women came on 13 August 1956, which marked the promulgation of the Code of Personal Status (CPS) that included progressive laws aiming at the institutionalisation of gender equality, most notably through the abolition of polygamy and legalisation of abortion.

It also granted women the rights to have their own passport, bank account and even a business. Since then, Tunisian women have been portrayed and perceived in the region as independent and emancipated.

This image was exploited by both former presidents to create a democratic facade. Under Habib Bourguibaʹs administration (1959–1987) Tunisia was promoted as a secular republic in a region otherwise dominated by Islamic monarchies and military dictatorships.

However, even the CPS was in the end a symbol of repressive progressiveness: while it mirrored institutional steps to improve the status of women, the progress was on Bourguibaʹs terms only.

The emancipation of women was thus credited solely to the allegedly feminist State and Statesman Bourguiba, who oversaw the feminist struggle in order to claim its achievements for himself.

Ironically, the image of Tunisia as a country spearheading the promotion of womenʹs rights is contested by the very figures produced by the state itself.

For instance, according to the National Office for Family and Population (ONFP), almost 50 percent of Tunisian women have experienced some form of violence in their lifetime.

And in a study conducted by the Centre for Research, Studies, Documentation and Information on Women (CREDIF) between 2011 and 2015, 53.5 percent of interviewed women reported to have experienced physical or psychological violence in a public space at least once.

Despite these challenges, increasing efforts on the part of women reveal a growing awareness of their role in influencing the political system and conquering civic spaces. There are many means and methods that womenʹs rights activists and organisations are employing to this end. In the following, I will highlight four of them.

First of all, women are reclaiming public spaces that are a symbol of gender segregation, for instance coffee houses, which are usually frequented by men only. They are also challenging religious and historical constructs of male-only spaces. Most notably, in 2013, a large number of women joined a ceremony reserved to men in the Islamic tradition, namely a gathering on the cemetery to pay their last respects to the assassinated prominent politician Chokri Belaïd.

Although many Arabs express sympathy for the Ukrainian people, social media reveals a current of support for Russian President Vladimir Putin that is rooted in polarisation, ... END_OF_DOCUMENT_TOKEN_TO_BE_REPLACED

As Pride Month draws to a close, Richard Marcus delves into Saqi Books’ latest publication, "This Arab is Queer". Edited by Elias Jahshan, this anthology of essays is remarkable ... END_OF_DOCUMENT_TOKEN_TO_BE_REPLACED

Algeria's decision to unilaterally sever diplomatic ties with Morocco in August 2021 – days after the presidency announced in a statement their relations would be reviewed – was ... END_OF_DOCUMENT_TOKEN_TO_BE_REPLACED

Madrid's about-face on the Western Sahara conflict has enraged Algeria. Trade relations have been frozen unilaterally and a cut in gas supplies to Europe could be in the pipeline ... END_OF_DOCUMENT_TOKEN_TO_BE_REPLACED

With regard to gender justice, things look bleak in the Arab world. Laws typically discriminate against women, while national legislation all too often does not comply with the ... END_OF_DOCUMENT_TOKEN_TO_BE_REPLACED

END_OF_DOCUMENT_TOKEN_TO_BE_REPLACED
Social media
and networks
Subscribe to our
newsletter