Moreover, street art has emerged as a powerful form of expression and resistance. Feryel Charfeddine chose graffiti to claim civic space and became the first woman to leave a tag on the walls of Tunis under the authoritarian regime. In 2012, she co-founded the grassroots movement Zwewla (Tunisian dialect for "the poor"), which uses graffiti art, murals and music to reflect on the reality of the working class (zwewla) and help them defend and claim their rights. "We express the reality of zwewla and raise awareness about marginalised classes through our graffiti on the streets and in public spaces where marginalised people live," Charfeddine explains.

Many obstacles stand in the way of women creating and enjoying art, such as patriarchy, racism, elitism and a lack of education, which is why it is important to create inclusive movements and initiatives. Street art is such an inclusive type of initiative as anyone can engage with it, if only by reacting or adding lines to it. "My first act of tagging on the wall was a response to a lack of public space available for womenʹs expression in the streets, a problem that was linked to the dictatorship before and nowadays to the predominance of Islamic discourse," says Feryel.

The involvement of many feminists, as well as political, social and civil society groups in the period of political transition resulted in one of the most progressive constitutions in the region that legally safeguards many rights of women. "Talk to those you disagree with" is a mantra that feminists, in particular, referred to as their strategy when engaging in debates with Islamic Conservatives during the constitution-drafting process. For instance, while Conservative-Islamic politicians were initially against gender equality, they later voted in favour of it. 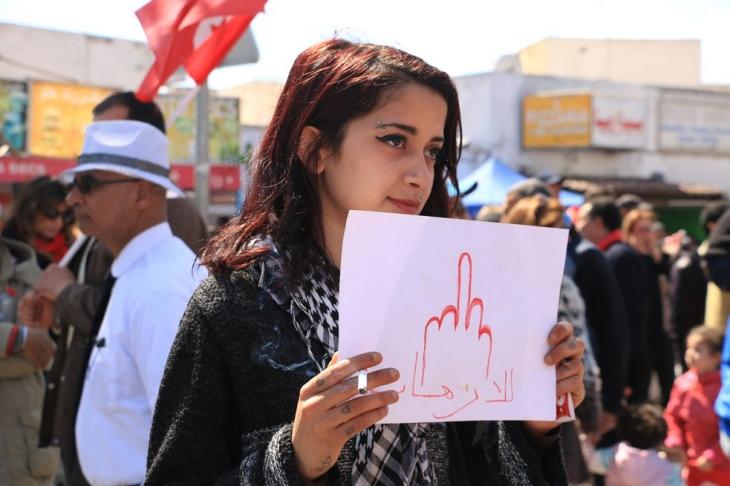 "No to terrorism": following the murder of left-liberal opposition leader Chokri Belaid in 2013, the political divide in Tunisia deepened further. Belaid was one of the harshest critics of the governing coalition led by the Ennahda party

Feminist groups organised advocacy events that gathered civil-society representatives, policy-makers and parliamentary members to debate equality as fundamental principle of the constitution. Thanks to local womenʹs groups, ensuring the participation of civil society in the constitution-drafting process, the new constitution, approved on 27 January 2014, is considered one of the most advanced of all South and East Mediterranean countries in political transition, especially in terms of civil liberties.

On the same question of equality, another means used by the feminist movement has been direct action, or more precisely: demonstration. On 13 August 2013, the National Day of Women and anniversary of the promulgation of the CPS, when Islamic Conservatives refused to discuss and change the newest draft of the constitution, womenʹs rights activists decided it was not a day of celebration, but of civic action.

They thus took to the streets for a major demonstration to demand womenʹs guaranteed right to equality. Posters and chants were calling for the revision of the draft, which even some of the 59 female MPs (42 from the Conservative Islamic party Ennahda) of the total 217 MPs had voted for.

Tunisia's economic and political instability and the increasing reluctance of Europe to take in job-seeking migrants is leading many Tunisians to head for sub-Saharan Africa in ... END_OF_DOCUMENT_TOKEN_TO_BE_REPLACED

Charting his own descent into extremism, former Moroccan jihadist Adil El Hasani reveals how he was ultimately able to extricate himself from the grasp of those peddling religious ... END_OF_DOCUMENT_TOKEN_TO_BE_REPLACED

The history of Jews and Muslims is far more entangled than you might imagine – but you have to listen out for it. In "Recording History", Christopher Silver takes us on a sonic ... END_OF_DOCUMENT_TOKEN_TO_BE_REPLACED

Welcome to the world of Al Qasar, where Arabic music collides head-on with punk and psychedelic to create something powerful and beautiful. "Who Are We" is a raucous, subversive ... END_OF_DOCUMENT_TOKEN_TO_BE_REPLACED

A conflict rooted in identity is currently gaining traction in Morocco. It began with demands to relieve the "burden" of Fusha (classical Arabic) by implementing a linguistic ' ... END_OF_DOCUMENT_TOKEN_TO_BE_REPLACED

The Women's Africa Cup this year in Morocco was a resounding success. The Moroccan team was the first Arab women's football team to qualify for a World Cup. By John Duerden END_OF_DOCUMENT_TOKEN_TO_BE_REPLACED
Author:
Aya Chebbi
Date:
Mail:
Send via mail

END_OF_DOCUMENT_TOKEN_TO_BE_REPLACED
Social media
and networks
Subscribe to our
newsletter