It stated that "the state shall preserve womenʹs rights and achievements under the principle of complementarity with men within the family and as partners of men in the development of the homeland." It invoked notions of "complementary" gender roles that risked diluting the principle of equality between men and women.

Owing to the direct actions of feminists, who were able to mobilise the masses despite prior incidents of police violence and harassment of protesters, Article 46 of the Constitution now declares, "The state commits to protect womenʹs established rights and works to strengthen and develop those rights." It further guarantees "equality of opportunities between women and men to have access to all levels of responsibility and in all domains" and "the elimination of all forms of violence against women."

Womenʹs rights activists and movements continue to march, protest, and disrupt when necessary, at times in the shape of scattered, organically growing events, and other times organised by the Association Tunisienne des Femmes Democrates (ATFD) or the Association des Femmes Tunisiennes pour la Recherche sur le Developpement (AFTURD). They refuse the dilution of their rights and the shrinking of their civic space, and are pushing the government to turn its attention to the pressing issues, such as the economy, one of the key reasons that had sparked the revolution. 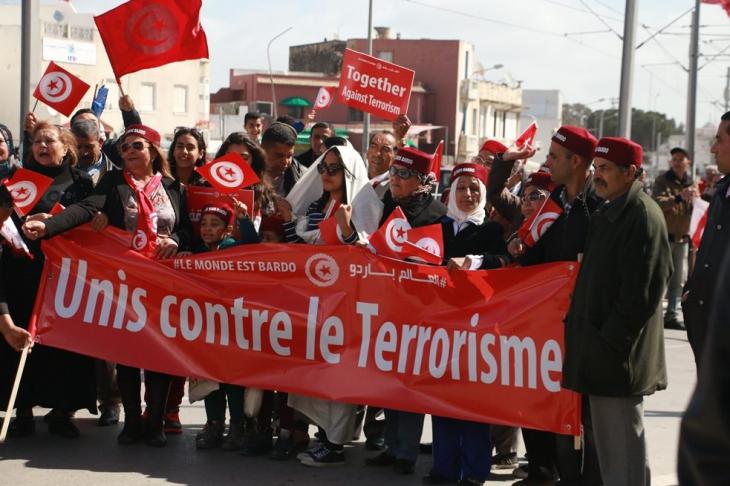 "Direct intervention, also known in social history as direct action, is another means used by the women's movement in Tunisia in the struggle for equality, especially in the form of demonstrations," writes Aya Chebbi

The promotion of solidarity and building of alliances define the most important contours of the Tunisian feminist movement. In fact, the Tunisian lesson is that feminist movements in predominantly Muslim countries are most effective in reclaiming civic space when banding together with other movements, such as those concerned with workersʹ rights and trade unions, marginalised groups, or climate change. This way, womenʹs issues become interwoven with all aspects of society.

The defeat of the Conservative-Islamic Ennahda Movement in the general elections of 2014, for example, came largely as a result of the public debate about womenʹs rights engaging large sections of the population. More than one million women decided to reclaim civic space and voted against Ennahda because of their belief in womenʹs rights. The gender advocacy battle is, therefore, strongly linked to the causes of social, political and human rights in general.

Tunisian women have achieved notable legislative and political accomplishments. Organised womenʹs groups in Tunisia were at the heart of drafting the constitution and reforming the electoral law to foster vertical and horizontal equality.

Regardless of how Tunisian women chose to face the challenges of political transition, the movement has been successful in reversing the decrease of civic space and challenging Conservative-Islamic opposition to progressive legislation. During elections and crises, the resilience of feminist organisations and activists ensured inclusive participation, solidarity in action and intersectionality in reclaiming civic space.

Aya Chebbi is an award-winning Pan-African feminist. She is the first African Union Youth Envoy and the youngest diplomat in the African Union Commission Chairpersonʹs Cabinet. She is the founder of multiple platforms, such as the Youth Programme of Holistic Empowerment Mentoring (Y-PHEM), coaching the next generation to be positive change agents, the Afrika Youth Movement (AYM), one of Africaʹs largest Pan-African youth-led movements, and Afresist, a youth leadership programme and multimedia platform documenting youth work in Africa.

Tunisia's economic and political instability and the increasing reluctance of Europe to take in job-seeking migrants is leading many Tunisians to head for sub-Saharan Africa in ... END_OF_DOCUMENT_TOKEN_TO_BE_REPLACED

Charting his own descent into extremism, former Moroccan jihadist Adil El Hasani reveals how he was ultimately able to extricate himself from the grasp of those peddling religious ... END_OF_DOCUMENT_TOKEN_TO_BE_REPLACED

The history of Jews and Muslims is far more entangled than you might imagine – but you have to listen out for it. In "Recording History", Christopher Silver takes us on a sonic ... END_OF_DOCUMENT_TOKEN_TO_BE_REPLACED

Welcome to the world of Al Qasar, where Arabic music collides head-on with punk and psychedelic to create something powerful and beautiful. "Who Are We" is a raucous, subversive ... END_OF_DOCUMENT_TOKEN_TO_BE_REPLACED

A conflict rooted in identity is currently gaining traction in Morocco. It began with demands to relieve the "burden" of Fusha (classical Arabic) by implementing a linguistic ' ... END_OF_DOCUMENT_TOKEN_TO_BE_REPLACED

The Women's Africa Cup this year in Morocco was a resounding success. The Moroccan team was the first Arab women's football team to qualify for a World Cup. By John Duerden END_OF_DOCUMENT_TOKEN_TO_BE_REPLACED
Author:
Aya Chebbi
Date:
Mail:
Send via mail

END_OF_DOCUMENT_TOKEN_TO_BE_REPLACED
Social media
and networks
Subscribe to our
newsletter