What I lament the most is that pre-war Yemen, with all its institutional injustices against women, had nevertheless overtaken Saudi Arabia and the United Arab Emirates (UAE) in its advancement of women's rights – a progress that today is basically undone.

Independent press and CSOs have disappeared as a venue to raise awareness about women's empowerment. Journalists, activists and aid workers have been harassed, attacked, and/or made to disappear by all warring parties. The space for civil action has shrunk drastically. Voices that dare to speak out in support of women's rights are effectively being silenced.

Women are fighting back

Meanwhile, women are pushing back. At the grassroots level, with some 12,000 men arrested and more than 3,000 forcibly disappeared, mothers, sisters and daughters of those abducted have begun to gather in front of the central prison or police stations across major Yemeni cities in search of their sons, fathers or brothers. They have organised themselves as a collective named "Mothers of Abductees Association". At the political level, UN Women has supported the establishment of the Yemeni Women's Pact for Peace and Security, which calls for women's inclusion in the political dialogue and peace process.

In addition, Yemeni women's political activism has been supported by the three UN Special Envoys for Yemen – Jamal Ben Omar, Ismail Ould Cheikh Ahmed and currently Martin Griffiths – over the past eight years. In accordance with UN Security Council Resolution 1325 – on the full involvement and equal participation of women in conflict resolution processes – Griffiths has ensured the presence of women in the Yemeni peace talks in Kuwait, Geneva and Stockholm through consultancy groups.

Even though Yemen has not witnessed a strong women's movement in recent history, women have become an important pillar in the formation of a new democratic Yemen since the 2011 uprising. Their activism under the difficult circumstance of continuing conflict has played an important role in shedding light on gross human rights violations and in peace advocacy.

Afrah Nasser is an independent Yemeni journalist, living in exile in Gothenburg, Sweden. Her reporting on Yemen's political affairs has been published in numerous international publications, such as the Huffington Post, CNN, Al Jazeera English and The National. Nasser was also mentioned as the 15th most powerful Arab by Arabian Business. In 2017, she won the International Press Freedom Award from the Committee to Protect Journalists. She is also the recipient of the Pennskaft Award 2016 and the Dawit Isaak Prize 2014.

The rollout of coronavirus vaccines in the Middle East and North Africa is already taking place on a massive scale, with the United Arab Emirates leading the way. Nevertheless, ... END_OF_DOCUMENT_TOKEN_TO_BE_REPLACED

German Middle East analyst Guido Steinberg and television journalist Ulrich Tilgner have both published new books on the conflicts in the Middle East. Their analyses and their ... END_OF_DOCUMENT_TOKEN_TO_BE_REPLACED 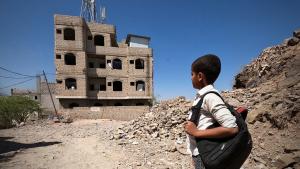 Nearly 700,000 Yemenis expected to flee their homes this year

With the world's worst humanitarian crisis now entering its seventh year, the United Nations predicts that another 672,000 people could be displaced by the end of 2021 if the ... END_OF_DOCUMENT_TOKEN_TO_BE_REPLACED

U.S. President Biden has announced he will be excluding Saudi Crown Prince Mohammed bin Salman from future talks between Washington and Saudi Arabia. Is this just lip service that ... END_OF_DOCUMENT_TOKEN_TO_BE_REPLACED

Nobel Peace Prize laureate Tawakkol Karman says the time has come to pressure Saudi Arabia and the UAE to withdraw from Yemen so that the country can resume the peace process and ... END_OF_DOCUMENT_TOKEN_TO_BE_REPLACED
Author:
Afrah Nasser
Date:
Mail:
Send via mail

END_OF_DOCUMENT_TOKEN_TO_BE_REPLACED
Social media
and networks
Subscribe to our
newsletter