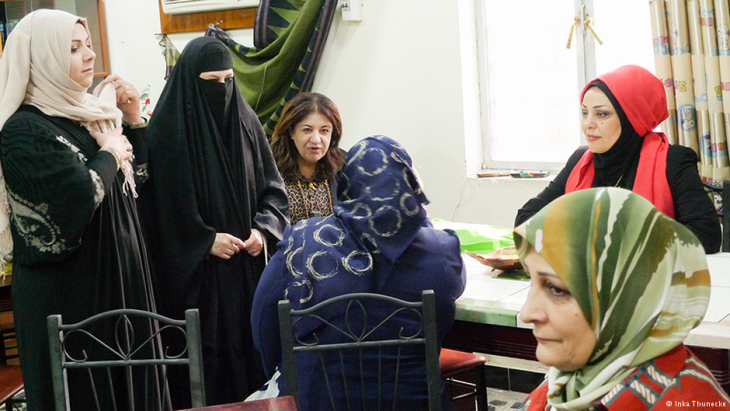 A writing workshop in the southern Iraqi city of Basra is encouraging women to use words to process their often traumatic experiences of a country scarred by destruction and conflict. But the future of the project now hangs in the balance due to funding problems. By Birgit Svensson

Ashti sits opposite the fully veiled Haura and cannot solve the task that the coach has set for them as an ice-breaker. "How can I guess what she likes if I can't see her face?" she asks. Twenty women from all over Iraq have gathered at the Basra city library to spend a week writing: Arabs, Kurds, Assyrians, Shias, Sunnis and Christians.

What they all share is a fascination for poetry. They have come to write poems and hone skills acquired in the past. "Writing for life" is the motto of the poetry seminar organised for the first time in Iraq by the Goethe Institute. But it becomes more than that.

The rift has deepened further

When the Kurdish women from Sulaymaniyah arrive in Basra in southern Iraq, they bring with them the prejudices that are omnipresent in the multi-ethnic state that is Iraq. They have hesitated for a long while before making the 800-kilometre journey south. The political tensions between the autonomous Kurdish regions and the rest of Iraq don't stop at people's front doors. Ever since Baghdad began cutting funds to the Kurds, who have been selling their oil independently of the central government, the rift has deepened further. In addition, southern Iraq is perceived as extremely conservative, while Kurdistan in the northeast of the country is regarded as progressive and modern.

"The South's just full of penguins," one of the Kurdish women utters a common perception upon arrival in Basra. She left her miniskirt at home, she says. Owing to their black mantles, black veils and the white hairband beneath it, women in Basra are often referred to as penguins.

A nation of poetry

It would appear that Ashti from Kurdistan and Haura from Basra are a world apart. But face veils are also rare in Basra. Haura is an exception. For her part, the young Arab woman is wary and does not want to be recognised when she's meeting progressive women from Kurdistan, Baghdad and even Germany. It could cast her in a bad light. But the next day, Haura comes to the workshop without her face veil, wearing a brightly coloured suit and headscarf. Prejudices are soon dispensed with. 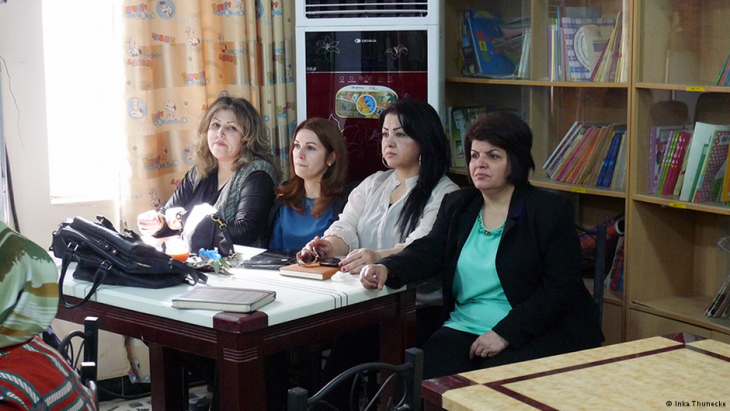 Writing to preserve memories: poetry has become a way to vent emotions and experiences, a therapy for the trauma and depression caused by wars and terrorism that weighs so heavily on the lives of many Iraqis

Iraq is a nation of poetry. More poems are written here than in any other country in the Middle East. Great poets from the past hail from Mesopotamia. Abul Tayyeb al-Mutanabi and the writers of the Arabian Nights compilation represent a poetry tradition going back centuries. Today too, poetry in Iraq is more popular than ever. It is seen as courteous to write poems, have them printed and to give them to friends and acquaintances. The same goes for both men and women. But the men are in the majority. Poetry has become a way to vent emotions and experiences, a therapy for the trauma and depression caused by wars and terrorism that weighs so heavily on the lives of many Iraqis.

Immersion in another world

"We're not starting from scratch here," Leila Chammaa reflects on the work with the women in Basra. The woman from Berlin with Lebanese roots has made a name for herself translating Arabic poetry into German. Writing workshops such as this one in Basra were the result. In response to questions on the point of writing poetry, she says she received precise answers. The women were already familiar with matters concerning rhythm, pauses and the analysis of poems. Comparisons between old and new Arabic poetry were made with enthusiasm. Some succeeded in shrugging off conventions and experienced something of a wake up call, Chammaa reports. Enas from Basra describes writing as immersion in another world.

But much more importantly: those who process dark episodes through poetry and narrative feel less pain. This theory is supported by studies conducted by various universities in Europe and the US. Telling a story mediates and reconciles. Those who tell it, survive.

This is especially important for women, because writing is often the only way to withdraw and process what has happened to them. Writing becomes the private sphere, the only opportunity to be alone, away from family and society. Samarkand from Baghdad sums it up: "Women write differently to men. Women write outwardly from within, while men write inwardly from without." 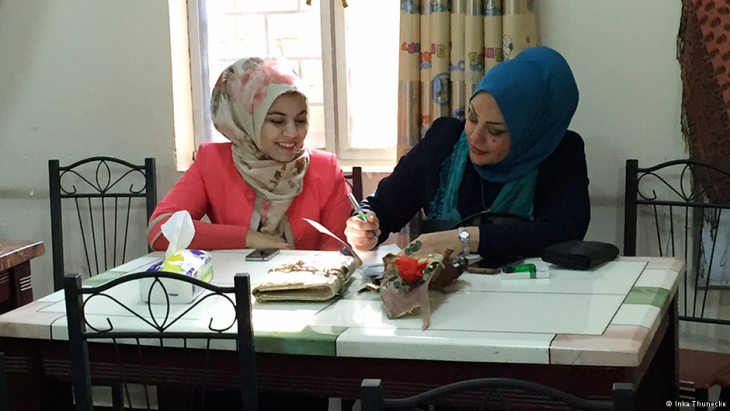 "Those who tell their story survive": this is especially important for women, because writing is often the only way to withdraw and process what has happened to them. Writing becomes the private sphere, the only opportunity to be alone, away from family and society

Although they suffer the same fate, the perspective is different, with personal emotions becoming the starting point and the focus of the texts and not, as in the case of male writers, external misery. Love in an era of terror, grappling with violence, dreams and fears: the texts show that women suffer and feel in a different way and that above all, they must bear other forms of violence. It is also violence within the family that often affects women, who cannot decide which is worse.

The censor in the head

It is first and foremost the social pressure that weighs so heavily on women at the present time. The profound economic and political crisis in Iraq and the war against the "Islamic State" terror militia allow little space for the concerns of women. The patriarchy continues to consolidate its position, religious authorities at times shamelessly exploit the security situation to cement the subservience of women.

"We have made better progress in the past," say the participants from Kurdistan and their colleagues from Baghdad nod in agreement. "In Basra the censor in the head dominates," says Muntaha, one of the few poets in the South who is not afraid to say openly what others will only utter under their breath, or withdraw totally into the private sphere.

Tears flow when it's time to say goodbye

Basra was once a flourishing city of poets, the place where the "Merbed" festival of poetry took place every year, one that many women also took part in. Today, many female poets write under a pseudonym and are afraid of publishing their work if it has content deemed to be critical of society.

When it's time for the workshop participants to say goodbye, the tears flow. Ashti from Kurdistan has completely done away with her prejudices, as have all the others. The closing aim, they say, is to establish a network to support each other in the future. "We can only make progress if we work together," says Haura from Basra. Meanwhile the German government has stopped funding women's projects in Iraq. In recent days, organisations that have been working with women in Iraq for years have begun receiving negative responses to their applications. Projects involving female parliamentarians from Kurdistan and Baghdad have also been rejected, just like the work with Yazidi women who were able to escape captivity at the hands of IS. There is also no further funding for the writing workshop in Basra.

Twenty years after 9/11, the world is faced with the dual challenge of Islamophobia and anti-Westernism. Ahmet Kuru argues that Muslims in the West, well versed in both Western ... END_OF_DOCUMENT_TOKEN_TO_BE_REPLACED

Two decades after the attacks of 11 September 2001, the West faces the shattered debris of its failure – not only in Afghanistan, but also in Iraq, Syria, Libya and Yemen. What ... END_OF_DOCUMENT_TOKEN_TO_BE_REPLACED

Twenty years after 9/11, the United States is recalibrating its war policy. However, its assertions that the era of endless wars is over are a myth, writes Maha Hilal END_OF_DOCUMENT_TOKEN_TO_BE_REPLACED

The coronavirus pandemic has turned lives upside down all over the world. In the Middle Ages, however, people lived with epidemics all the time. The best and most famous ... END_OF_DOCUMENT_TOKEN_TO_BE_REPLACED

While agreeing last week to a withdrawal of US combat troops from Iraq, neither Iraqi nor US leaders can admit publicly how much they need each other. By Cathrin Schaer END_OF_DOCUMENT_TOKEN_TO_BE_REPLACED

Reading Hassan Blasim's God 99 is an immersive experience of grief and exaltation, anger and disgust, writes Marcia Lynx Qualey. We join the Iraqi narrator as he sits around in ... END_OF_DOCUMENT_TOKEN_TO_BE_REPLACED
Author:
Birgit Svensson
Date:
Mail:
Send via mail

END_OF_DOCUMENT_TOKEN_TO_BE_REPLACED
Social media
and networks
Subscribe to our
newsletter