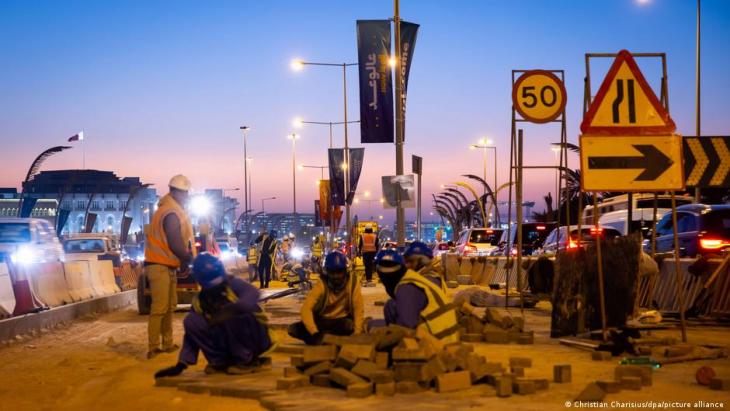 Qatar has come under fire for the mistreatment of migrant workers, which includes low pay and dangerous conditions. FIFA says it has taken measures to protect workers.

The majority of soccer fans from 15 countries want FIFA to compensate migrant workers who have helped provide the upcoming World Cup in Qatar, according to a new poll commissioned by Amnesty International and published last Thursday.

In May, Amnesty and other rights groups called on FIFA to set aside $440 million (€441 million) to compensate migrant workers in Qatar for human rights abuses.

A YouGov survey released by Amnesty has now found that among 17,000 supporters from 15 countries, 73% of respondents would support the proposal from the rights groups, while 10% opposed it.

"There is still time for FIFA to do the right thing," Amnesty's Steve Cockburn said in a statement. "Supporters don't want a World Cup that's indelibly tainted by human rights abuses."

The poll surveyed adults in ten European countries plus Kenya, Morocco, Argentina, Mexico and the United States. Roughly two-thirds of respondents also said their national football associations should speak out publicly about the human rights issues surrounding the tournament which will begin on 20 November.

The government of Qatar has long been criticised for the mistreatment of migrant workers, who mainly come from countries like India, Pakistan and Nepal.

FIFA said a wide range of measures had been implemented in recent years to improve protection for workers in Qatar, noting that workers preparing for the World Cup had already been paid $22.6 million as of December 2021.

"FIFA takes note of the poll conducted on behalf of Amnesty International, featuring respondents from 10 countries in Europe and five countries from the rest of the world," the governing body said in a statement. "Respondents may not be fully aware of the measures implemented in recent years by FIFA and its partners in Qatar to protect workers involved in the delivery of the FIFA World Cup Qatar 2022."

Ever since Qatar won the rights to host the World Cup, in 2010, human rights groups have criticized the country's treatment of foreign labourers.

Amnesty has previously said many workers have been living in squalid conditions, forced to pay recruitment fees and had salaries withheld along with their passports confiscated.

Since 2017, the Qatari government has brought in measures to protect foreign workers during extremely hot weather conditions, limit their working hours, and improve the situation in the camps where they are housed.

Even in the wake of those measures, Human Rights Watch has documented how workers have suffered from "punitive and illegal wage deductions" while some have faced "months of unpaid wages for long hours of gruelling work."

In February of last year, British newspaper the Guardian said some 6,500 migrant workers had died since Qatar won the bid to host the World Cup.    (Reuters, AFP)

More on this topic
2022 FIFA World Cup and human rights: Pointing the finger at Qatar's rulers is not enoughWorld Cup 2022 and Qatari reforms: So much hot airQantara photo essay: At the bottom of the heap: foreign construction workers in Qatar
Home
Print
Newsletter
MoreAll Topics

END_OF_DOCUMENT_TOKEN_TO_BE_REPLACED
Social media
and networks
Subscribe to our
newsletter