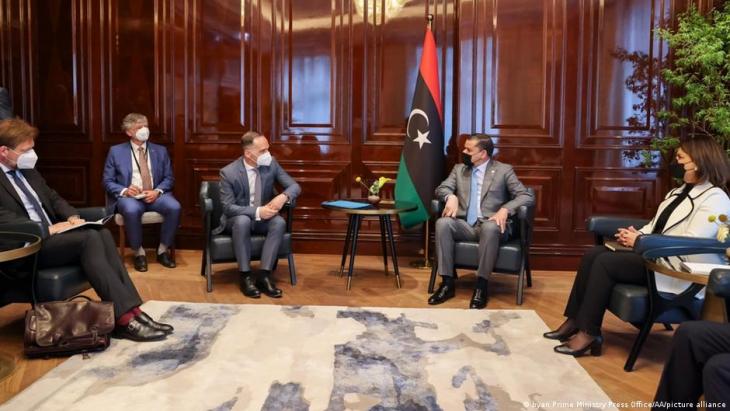 The foreign ministers of the countries involved in the conflict in Libya are meeting in Berlin on Wednesday to discuss the further stabilization of the war-torn country.

The one-day conference is hosted by the German government and the United Nations, and is to be attended by the United States, Russia, Turkey, Egypt, the United Arab Emirates (UAE) as well as the Libyan transition government.

The main goal of the conference – as during the first Libya conference in Berlin in January 2020 – is to end outside interference in the conflict. This has not succeeded so far.

According to estimates by the UN, some 20,000 foreign mercenaries were stationed in Libya in December 2020, and the figure has not significantly changed. Arms deliveries have also not stopped.

But there is some progress: a ceasefire has been established, an interim government set up and parliamentary elections are planned for 24 December.

The day before the conference, Libya's new Foreign Minister Najla Mangoush called for regular meetings at ministerial level as a way to resolve conflict in her war-torn country. Foreign ministers of the states involved in the conflict in Libya should meet regularly in the future, she said in a speech broadcast on Libyan television.

Libya has been in turmoil since the 2011 overthrow of dictator Muammar Gaddafi. It has become a battleground for rival proxy forces, which has in turn drawn in foreign powers. The working group should focus on a vision for a solution to the crisis and on issues related to political, economic and other interests of the Libyan people, she said, without naming the states which should send foreign ministers to join the initiative.

Claudia Gazzini of think tank Crisis Group warned that the road to long-term peace in Libya was still long, but the conference could bring new dynamism into the process.

"The Libyan parliament and the executive were not able to drive the process forward alone," Gazzini said.

This was why tensions between rival groups had increased again in recent times, she added. One of the most pressing issues, according to the expert, was the lack of legal framework for the December elections.    (dpa)

END_OF_DOCUMENT_TOKEN_TO_BE_REPLACED
Social media
and networks
Subscribe to our
newsletter