They are both eloquent writers and contentious thinkers. The authors Yasar Kemal and Günter Grass met at the invitation of the German Academy of Arts in Berlin. The topic of discussion was the relationship between literature and politics. Ariana Mirza reports

"Those that write the songs of the people are much more powerful than those that make the laws", said Yasar Kemal during the meeting with Günter Grass at the Academy of the Arts in Berlin

​​ Over the past few decades, only a handful of writers have been able to demonstrate the power of literature as vividly as Günter Grass and Yasar Kemal. Their novels have immersed readers from around the globe into previously unknown realms and circumstances. To loose oneself in the pages of their books means embarking on a voyage in which both territorial borders as well as the unseen barriers between the visible social barriers are dissolved.

Grass's magnum opus "The Tin Drum" shed light on the German past while also securing and immortalizing in literature the treasure that is the long-ignored Kashubian language and identity. Yasar Kemal's masterpiece "Memed, My Hawk" is similarly a work of great poetic beauty, which simultaneously harbours revolutionary social criticism.

The linguistic texture of Yasar Kemal's work is so sensitive and finely woven that the reader can even breathe the scent of the thyme fields of the Anatolian Çukurova Plain.

Kemal's literary figure Memed, which he brought to life in 1955, has long assumed a status of mythic proportions. Today, there are some 10,000 supposed gravesites of the fictional rebel to be found in Turkey. Many still believe that Memed was more than just a character in a novel. 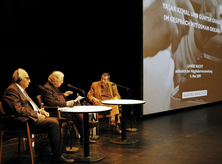 Yasar Kemal explained that it is a matter of survival for Turkey to recognize its different ethnic populations. "This applies equally for Turks as well as for Kurds," he said

​​ The German and Turkish writers are not only bound by their shared narrative power and richly visual language. Also in terms of their origins, both authors are hybrid beings, familiar with the tumultuous life found in culturally mixed societies as well as the irreconcilable hate between various ethnic groups.

The Turkish-Kurdish writer and the German-Kashubian author have brought their experiences of cultural difference to their literature – and thereby decisively left their mark on the present-day cultural landscape of their "half" native lands.

With so much in common, it is not surprising that Günter Grass and Yasar Kemal are friends. Last, but not least, they are united as "aesthetes who have descended into the depths of politics," said Grass somewhat coarsely during their meeting in Berlin. Grass gave the laudatory speech in 1997 when Kemal was awarded the important Peace Prize of the German Book Trade.

Breaking an oath of eternal enmity

For the socialist Kemal, social commitment in the past was not without its consequences. He sat many times in prison on account of his convictions. In his last encounter with a Turkish court in 1995, he was banned from writing about the Kurdish problem for a period of five years. 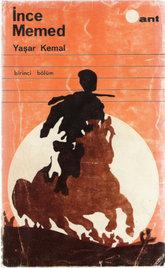 Memed, My Hawk (Turkish: İnce Memed) was Kemal's debut novel In 1961, the book was translated into English

​​"I will never forgive this state," declared Kemal two years later as he learned that the court had once again imprisoned the blind left-wing intellectual Esber Yagmurdereli.

Many years have passed since then and Turkey has dramatically changed both politically and socially.

Nonetheless, many observers, and not only in Turkey, were surprised when Kemal was announced last year as the first recipient of a newly established cultural award of the Turkish president. Even more irritating to those observers is the fact that Kemal accepted the honour from President Abdullah Gül.

"My first impulse was to reject the award," Kemal later admitted. But after some consideration and, not least, some powerful convincing by Abdullah Gül's advisors, he decided to follow the path of hope. "The prize should be taken as a sign that the way to social peace is open."

Farewell to the idea of a monoculture

There was no mention in Berlin of Yasar Kemal's acceptance of the Turkish cultural prize. As if it were a taboo topic, neither the moderator Osman Okkan of the Turkish Cultural Forum in Germany nor Kemal's literary colleague Günter Grass referred to the honour. Instead, participants discussed what social peace in both countries should look like. 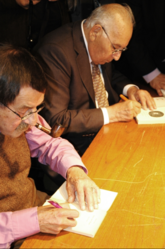 Literature and the social conscience of society: Günter Grass and Yasar at the autograph session in Berlin

​​The writers demanded that it is time in Turkey as well as in Germany to bid farewell to a "monochrome idea of society." In neither land has there ever been cultural or linguist homogeneity. Diversity can no longer be denied, but should instead be recognized as an enrichment, agreed both writers.

Günter Grass pointed out how much German literature has been enriched by the work of migrants and their descendants. "Yet, so much of this great potential for literature and society at large is lost as a result of exclusion," says Grass.

The recognition of cultural minorities

Yasar Kemal explained that it is a matter of survival for Turkey to recognize its different ethnic populations. "This applies equally for Turks as well as for Kurds."

As a writer, Kemal regards himself in a good position to judge the extent to which the Kurdish language has suffered from its longstanding ban in Turkey. "This is why there is no significant Kurdish language literature in the country." He had to turn to the rich Turkmen linguistic culture in order to create his work. Both writers stressed that society and literature are closely bound. "Literature has always dealt with social upheavals and politics," said Grass.

The power of writers and thinkers

The two grand seigneurs of contemporary literature radiated a youthful, fighting spirit in Berlin and were cheered on by their readers in the completely full hall as well as during the subsequent autograph session. The 81-year-old Grass aimed his criticism primarily at the German government and condemned Turkey's approach to the massacre of Armenians, which the Nobel Prize winner refers to as genocide.

Kemal, for his part, reminded the audience "that prison is the school of Turkish authors." "We are always a thorn in the eye of the powerful," said the 85-year-old. And, in keeping with his idol, Cevat Sakir, the "fisherman of Halikarnassos," he added, "those that write the songs of the people are much more powerful than those that make the laws."

Arab Intellectuals Support Günter Grass
Communiqué Reveals Degree of Ignorance
In a communiqué appearing in a number of Arab daily papers, 46 writers, poets, artists, and intellectuals from different Arab countries announced their solidarity with Günter Grass. The wording of the communiqué, however, is extremely controversial. Mona Naggar reports

END_OF_DOCUMENT_TOKEN_TO_BE_REPLACED
Social media
and networks
Subscribe to our
newsletter