Love and Nostalgia in Times of War

In Yasmina Khadra's new novel, years of unfulfilled desire between a French woman and an Algerian man reflect the dramatic relationship between the Occident and Orient; two worlds that bring so much suffering upon each other yet struggle so desperately for reconciliation. A review by Volker Kaminski 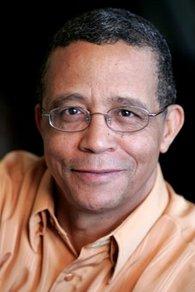 Mohammed Moulessehoul, a high-ranking officer in the Algerian army, published his first books under his wife's name to avoid strict military censorship

​​The sun in Rio Salado must shine more intensely than elsewhere – there is no other explanation for how a contemporary novel can revel in such glowing colours, voluptuous landscapes and hosts of sunsets. Rio Salado, an Algerian village populated mainly by winegrowers, is where the narrator spends almost his entire life.

At the end of the book, he tells us how much he still loves it there and how he can hardly imagine a place more beautiful, despite having experienced both vineyard festivals, endless rounds of balls and weddings – and a great deal of human suffering, loss and grief.

When Younes arrives in this "magnificent colonial village" as a boy, he has already been through tragedy. Younes is the child of an Algerian farm worker, forced to move to the ghetto of Oran with his family in the vain hope of finding work.

The family descends into utter misery, the father unable to avert disaster despite all his efforts, and Younes is only rescued by his uncle, a wealthy pharmacist who takes him into his home.

Under the new name of Jonas, he finds a home with his childless aunt and uncle, spending the rest of his life in the European part of Algeria, still under French rule. Everything Jonas experiences from this point on is refracted through his identity between two cultures; no matter how European he may feel, he is always a Muslim boy.

This is the tragedy and the destiny of his life, his story told in a great novel of an era by Yasmina Khadra, a very prolific and successful writer, particularly in France. 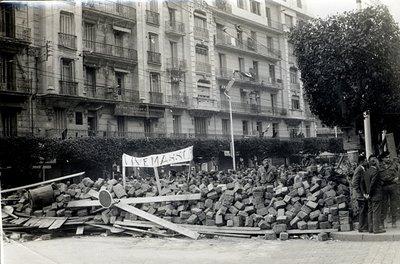 Road block in Algiers during the war of independence in 1960: Khadra's novel reflects the tense relationship between France and Algeria and the Maghreb state's troubled pre-independence history

​​Yasmina Khadra is the pseudonym of Mohammed Moulessehoul. Born in 1955, he was an officer in the Algerian army and assumed his wife's names to evade military censorship. He only revealed his true identity in 2000, when the two of them moved to Paris.

The focus of his eventful novel, which begins in the late 1920s and spans to the present day, is on Younes' love for the young French woman Emilie. Yet Younes never reveals his great love – out of shame and inhibitions that he cannot overcome, despite passionate appeals on the part of Emilie, who admits her love for him in a dramatic declaration.

Tense relationship between France and Algeria

The author weaves this sorrowful story over hundreds of pages. While the political upheavals in the wake of World War II make their mark on all of Algeria, eventually leading to a military confrontation between the French and Arab parts of the country, we read in parallel of the excruciating tragedy between Younes / Jonas and an increasingly despairing Emilie, who finally marries another man but never disappears from Younes' life. 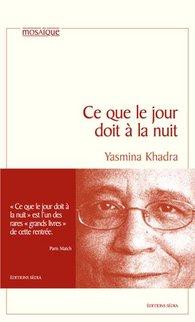 Khadra's new novel is a story of the Algerian boy Younes' broken identity, as the son of a farm-worker forced to move to the ghetto of Oran

​​The narrator's extreme reserve is hard to bear; at times Younes comes across as absolutely apathetic, passively submitting to his life – enough to drive the reader to desperation. Emilie loves him – and Younes returns her feelings; over the years they make several attempts to talk about it, but their mutual love remains unfulfilled.

Presumably, Khadra had the tense relationship between France and Algeria in mind as a model for his troubled couple: the destruction of Algeria, the brutal massacre en route to independence in 1962. At that time, life in Rio Salado comes to an absolute standstill – no wine is grown any more and most people have left the village, leaving only Younes to carry on running his pharmacy.

By the end of the book, "the time of blossoming innocence" is over and an eighty-year-old Younes looks back upon the shards of his life. After his years of suffering over Emilie, he did lead a good life (not described in the novel, however): marrying and having children and grandchildren. Yet on a visit to pay his condolences after Emilie's death, he realises that all he has left is nostalgia – with the novel offering a telling wordplay:

On meeting again, the old friends from Rio Salado talk of a special "nostalgérie" that fills them every time they "are overwhelmed by homesickness again". All of them have had to emigrate, and have since been longing for the fatherland of which they can no longer take possession – not even after a two-hour flight and a reunification with Rio Salado.

Interview with Yasmina Khadra
"The Arab World is not just a Postcard with Dunes and Caravans"
Yasmina Khadra is the pseudonym of Mohammed Moulessehoul, a former major in the Algerian Army, now full time novelist. In this interview with Richard Marcus, the exiled writer talks about his writing and the differences between Western and Arab culture

END_OF_DOCUMENT_TOKEN_TO_BE_REPLACED
Social media
and networks
Subscribe to our
newsletter