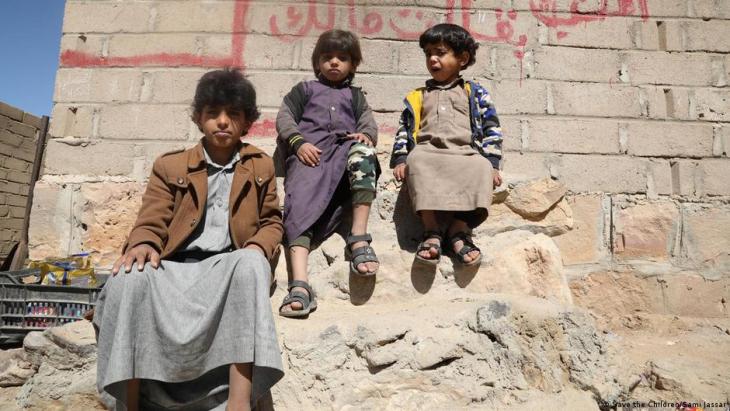 The city of Marib is the most important place of refuge in Yemen for those displaced in the country. But fighting between Houthi rebels and government troops is currently escalating there, further exacerbating the humanitarian catastrophe. Karim El-Gawhary reports

Measured by European standards, where a few thousand refugees on the Belarussian border are causing an outcry, the scale of the crisis here is almost unimaginable. An influx of refugees has swelled the population of the Yemeni city of Marib from a few hundred thousand to over a million. Some even estimate that nearly three million people have fled there. But no one knows the exact numbers. Over the course of Yemen's seven-year civil war, the city has become the main refuge for all those displaced in the country.

Marib is the last bastion of the Yemeni government in the northern part of the country. It is strategically vital. A motorway passes through the city leading to Saudi Arabia, five hours away. And there are also gas deposits in the area. Just a few months ago the city was still a haven of calm set apart from the battlegrounds of the civil war, making it a popular refuge, but today Marib has become one of the country's most fiercely contested locations. The Iranian-sponsored Houthi rebels are currently trying to capture territory just outside the city that is held by government forces, backed by Saudi Arabia.

If the Houthis succeed in seizing Marib, it would be a strategic triumph. It is mainly the Saudi air force that is still keeping the rebels from bombing their way to the city outskirts. The Saudis flew nearly 50 attacks against Houthi positions this week alone. While Houthi propaganda predicts that the conquest of Marib is only a matter of time, government forces and the Saudis have vowed to defend the city to the bitter end. 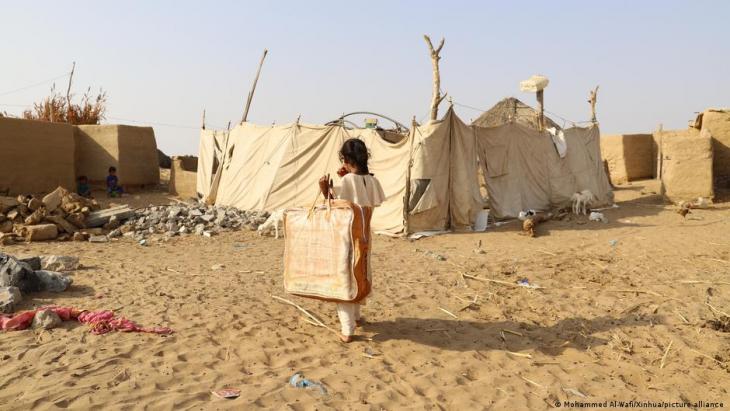 Emergency shelter for refugees in Yemen. "Twenty million people in Yemen are dependent on humanitarian aid, that's two-thirds of the population," says Austrian Christa Rottensteiner, on the phone in Aden, head of the International Organization for Migration (IOM) in Yemen. "Many millions have been driven from their homes". Hopelessness and despair is particularly hard to witness in the camps around Marib, she said. For Rottensteiner, however, a personal horror scenario remains. "If the war comes any closer to the city, we might really witness a catastrophe where half a million or even a million people are forced to flee," she says. "That would be the worst scenario for humanitarian organisations like ours"

As fighting intensifies, people have flocked to Marib in recent weeks to seek shelter from the advancing front. "Since September, an additional 45,000 displaced persons have arrived in the city. The number arriving every day in the 130 refugee camps around the city has increased tenfold," said Christa Rottensteiner in interview, describing the dramatic situation via telephone from Aden. She has been head of the International Organisation for Migration (IOM) in Yemen for the past two years, the largest humanitarian organisation active in Marib. Rottensteiner regularly travels to Marib and just returned from there a few days ago.

Developments in the city present a huge challenge for humanitarian aid organisations. "We bring food and hand out tents and blankets. We also provide medical care, but it is never enough. We see so much suffering, and we can only help a fraction of those with the worst problems. Our major obstacle is that we don't have enough money or staff," the IOM head complains. Another problem is getting access to the camps: "The people who need us often live too close to the front lines, and the camps are also constantly changing. New tents pop up all the time and it's difficult to keep up."

Supplying water in the desert – a logistical nightmare

She is troubled not only by the sheer numbers and logistical problems, but also by the individual fates that hang in the balance. "What has really touched me personally are my conversations with many women, for example with a young widow who has now had to flee for the fifth time with just the bare necessities. Her four children are unable to attend school and have to live in a tent shared by 40 people, without water. Now that winter is coming it's getting cold and they have no blankets," Rottensteiner says. 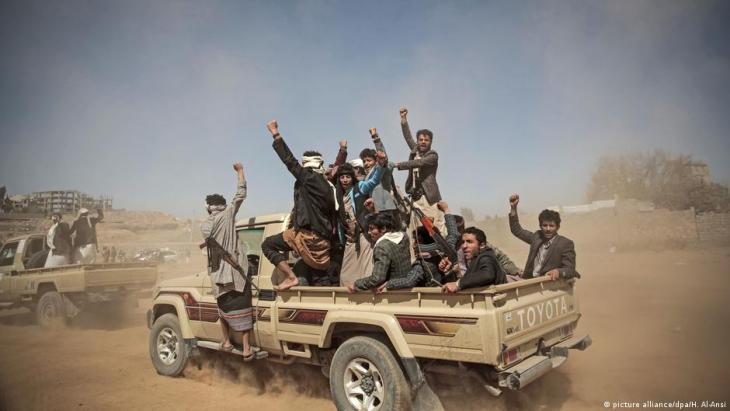 Iranian-sponsored Houthi rebels (pictured here in 2017) are currently trying to capture the outskirts of Marib, which is held by Saudi-backed government forces. While Houthi propaganda predicts that the conquest of Marib is only a matter of time, government forces and the Saudis have vowed to defend the city to the bitter end

The logistical nightmare includes not only supplying water to the camps that have sprung up in the desert around the city. Ten out of every hundred children in Marib are malnourished. There is plenty of food on the market, the IOM chief explains, but "the problem is inflation. Prices have doubled since the beginning of the year. Even if food is still available, most people can no longer afford it."

According to Rottensteiner, the full extent of the plight in Yemen is scarcely conceivable for us here in Europe. But perhaps the numbers give some indication of the devastation wrought by this war and the dramatic situation facing the country: "20 million people in Yemen are dependent on humanitarian aid, that's two-thirds of the population. And many millions have been driven from their homes."

The hopelessness and despair in the camps around Marib is particularly difficult to witness, she says. Everyone knows that as long as the war wears on there can be no hope for improvement. Rottensteiner paints a grim picture of things to come: "If the war comes any closer to the city, we might really witness a catastrophe where half a million or even a million people are forced to flee. That would be the worst-case scenario for humanitarian organisations like ours."

Arab youth express their hopes and wishes for the New Year, spanning everything from civil and political rights, to education, to arts and culture. By Rafiah Al Talei END_OF_DOCUMENT_TOKEN_TO_BE_REPLACED

With World Cup 2022 around the corner, Qatar has embarked on a campaign to clean up its school system. Distracting from grievous shortcomings in other areas by highlighting a ... END_OF_DOCUMENT_TOKEN_TO_BE_REPLACED

Moncef Marzouki was Tunisia's first democratically elected president after the fall of dictator Ben Ali. Today he is the most prominent critic of increasingly counter- ... END_OF_DOCUMENT_TOKEN_TO_BE_REPLACED

Asef Bayat, professor of Sociology at the University of Illinois, Urbana-Champaign, has been studying revolutions and how they affect people since 1979. In his recent book, " ... END_OF_DOCUMENT_TOKEN_TO_BE_REPLACED

The catastrophic human rights situation in Bahrain is being largely ignored by the rest of the world. Despite all the damning evidence, which includes a Human Rights Watch report ... END_OF_DOCUMENT_TOKEN_TO_BE_REPLACED

Ankara is seeking to improve its relations with several states in the Middle East – such as the United Arab Emirates, Egypt and Israel. There are several reasons for this. ... END_OF_DOCUMENT_TOKEN_TO_BE_REPLACED
Author:
Karim El-Gawhary
Date:
Mail:
Send via mail

END_OF_DOCUMENT_TOKEN_TO_BE_REPLACED
Social media
and networks
Subscribe to our
newsletter