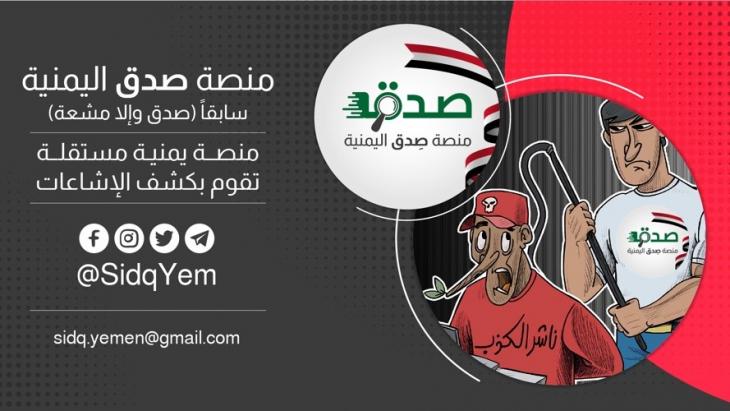 Due to security concerns, the interviewee preferred to remain anonymous.

What prompted you and your team to establish the Sidq Yemen platform?

In August 2019, when we founded Sidq Yemen, my Yemeni friends and I noticed that fake news was being widely circulated and there were no platforms to counter or expose it. Some of these fake news stories were harmful and seen to threaten societal peace. For example, when we launched the platform, there was a fake story circulating about southern citizens attacking people in Sana’a that went viral. People began talking negatively about southern Yemenis. We checked the news and found that it was false. The video that was published to support the claim was also false. When we discovered that it had gone and no one was doing anything to stop it, we decided to set up Sidq Yemen. We were inspired by other fact-checking platforms, such as the Jordanian Fatabyyano and the Iraqi platform Tech 4 Peace. We became the only Yemeni platform countering disinformation.

What are the biggest challenges your team has faced since establishing this platform?

The biggest challenge is the security risk for journalists in general – and for investigative journalists or fact-checkers in particular – after all, no party in Yemen likes those who expose their lies. In terms of investigations, one of the main challenges we face is that we don’t have enough access to high quality sources. There is more than one government in Yemen, so now we are dealing with the Houthi-controlled SABA News Agency and President Hadi's government news agency, SABA. That makes things even more complicated, not to mention challenging.

False: A photo of the #Belhaf LNG production facility that has been recommissioned.

Truth: The picture is old from 2011 and the recommissioning was not announced by the Yemeni or the French government, who were accused of taking gas from #Yemen to replace Russian gas.#SidqYemen pic.twitter.com/jr8colsaBj

Trust in the truth

What about your greatest achievements to date? What are you and your team most proud of?

We are proud of the huge trust our supporters have placed in us. We receive dozens of messages from people requesting clarification or wanting to talk about a disinformation topic, simply because they trust us and they want us to post something about it. In one instance, there was a fraud network – Qasr al-Sultanah – in Yemen that collected millions of dollars using pyramid marketing. Sidq was able to expose the network and we were instrumental in dismantling it. Ultimately, the people behind the operation were arrested. It was a huge success. The fake company was run by a woman named Belqees al-Haddad. Needless to say, she is now in prison. There was also a man who collected money from people while claiming to have businesses in the United Arab Emirates, so we broke that story and he was arrested.

Have there been any threats against you or your team during the investigation of such cases?

We have received messages saying things like, "The men of Allah will come for you and take our revenge". People sent WhatsApp messages saying Sidq Yemen was the reason they lost their investment. But people lost their money because they trusted such schemes! That is the main reason we prefer to remain anonymous.

Drought and upstream water diversions have seen the Zayandeh Rood, "fertile river" in Persian, run dry since 2000, with only rare exceptions. The famed river bridges of the ... END_OF_DOCUMENT_TOKEN_TO_BE_REPLACED

Since the government cut subsidies for food, prices in Iran have skyrocketed. Protests that broke out in Khuzestan province are now spreading across the Islamic Republic. By ... END_OF_DOCUMENT_TOKEN_TO_BE_REPLACED

Very different Western reactions to the suffering in Ukraine and the Arab world show that there is a profound rift among cultures. Essay by Michael Young END_OF_DOCUMENT_TOKEN_TO_BE_REPLACED

United Arab Emirates strongman Sheikh Mohammed bin Zayed al-Nahyan, who was formally elected president on 14 May, has led a realignment of the Middle East, creating a new anti- ... END_OF_DOCUMENT_TOKEN_TO_BE_REPLACED

More than 800 Iranian filmmakers have signed a declaration against sexual harassment, coercion and violence in their industry. The public's response to their willingness to name ... END_OF_DOCUMENT_TOKEN_TO_BE_REPLACED
Author:
Hannah Porter
Date:
Mail:
Send via mail

END_OF_DOCUMENT_TOKEN_TO_BE_REPLACED
Social media
and networks
Subscribe to our
newsletter