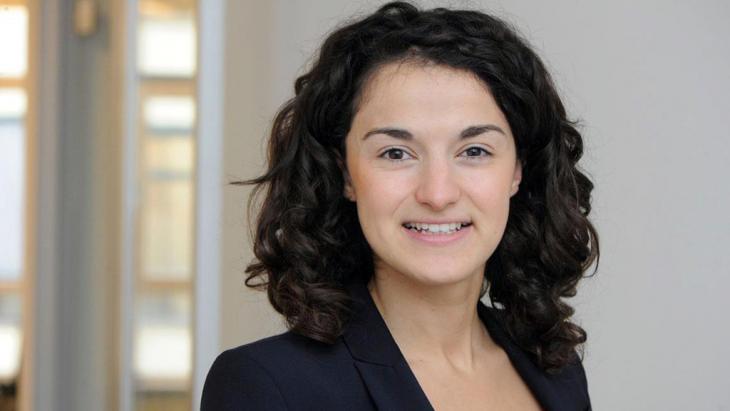 Esra Küçük: The Young Islam Conference is a think tank, a forum for dialogue and a multiplier network for young people between the ages of 17 and 25. It was initiated by the Mercator Foundation, the Mercator Program Center and the Humboldt University of Berlin. As a nationwide forum, the Young Islam Conference offers young people with or without a Muslim migrant background a platform for the exchange of knowledge, discussion and intervention in societal debates.

When the JIK was developed, the aim was to create a platform where young people in Germany could critically reflect on the prejudices and negative images surrounding the topics of Islam and Muslims in Germany. Since its foundation, the JIK has become an important force in political education on this subject.

What are the conceptual aims and priorities of the Young Islam Conference?

Küçük: The Young Islam Conference operates at the interface between political education, academic research and socio-political discussion. Our goal is to make the academic findings coming from the ivory tower of academia more easily accessible to all and to link them to questions of everyday co-existence. The result is an annual catalogue of recommendations, which we submit to political decision-makers.

In the medium and long term, however, our content is more broadly focused: we discuss Germany as an immigrant society. The way society deals with Islam and Muslims in Germany and the discourse on these subjects – which is often fraught with ignorance, social and cultural anxieties and discrimination – is representative of societal discussions about how to deal with cultural diversity in Germany in general.

Furthermore, we see ourselves as a protagonist in civil society that seeks to compile young people's perspectives on the subjects of "Islam and Muslims in Germany" as well as "Germany as an immigration society" and advance them into the political arena. 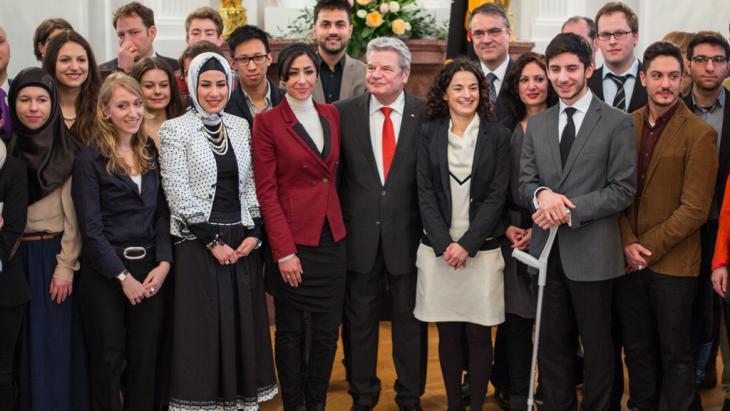 A platform and a mouthpiece for young Muslims and non-Muslims alike: participants at the Young Islam Conference pictured together with German President Joachim Gauck (centre) in Schloss Bellevue in Berlin on 8 March 2013

Küçük: In the past, issues relating to security policy have often been conflated with issues relating to integration policy in the DIK. This has contributed to the creation of distorted images in society. Why are German politicians specifically seeking out representatives of Muslim associations and Muslim individuals to discuss matters of security and integration policy? This suggests that Muslims have some catching up to do in these areas.

We are of the opinion that not only does this amalgamation not accurately reflect the facts, it also creates potential for societal conflict. This is why we very much welcomed the DIK's change of direction under the leadership of the new Federal Minister of the Interior, Thomas de Maizière.

Moreover, all those representing the DIK at the negotiating table belong to a generation that might experience diversity in their everyday lives in completely different ways to the young people who are growing up here in Germany and for whom diversity has become completely normal at their schools, in their neighbourhoods or in their associations and clubs. Moreover, we must not forget that the majority of Muslims in Germany are young. Approximately half of all Muslims living in Germany are under 25. These voices are given a platform by the JIK. Our goal is to bring these voices into the mainstream political discourse so that it can be enriched by these young perspectives!

How can those interested in taking part join this forum of debate?

Küçük: In the coming years, the JIK will be divided into regional subgroups. This means that anyone interested in taking part can apply to attend our conferences at federal state level. The next conferences at this level are planned for the autumn. Our invitations to apply will be published during the summer. Participants in our federal state conferences may be chosen as delegates to attend the national conference in spring and help formulate the catalogue of recommendations.

To what extent have you actually been able to incorporate the wishes of young Muslims into the JIK and to increase its influence? Can you give any concrete examples?

Küçük: First of all I would like to point out that the JIK is not a platform only for young Muslims. We aspire to provide a mouthpiece for all young people in Germany who are interested in the subject of "Islam and Muslims in Germany", and who would like to accompany us in the move towards a more diverse and prejudice-free society.

In its latest catalogue of recommendations, the JIK encouraged the DIK to change its focus and concentrate more on issues relating to religion. This recommendation, which many other observers agreed with, has now been put into practice.

In the last DIK, two of our members were guests in working groups and were able to provide critical input from the JIK's perspective. Our participants' call to set up a study commission in the Bundestag was very well received by politicians, academics and civil society. These recommendations were acknowledged and discussed in the highest circles. Now we are waiting for the party leaders to give us a definite reply.

Why did you make this recommendation? What is a study commission and what does it do?

Küçük: We recommended that the DIK no longer discuss issues of integration because these are not a matter exclusively for the ministry that is responsible for the security of our country. These issues belong instead at the very heart of our parliamentary democracy: the German Bundestag! We were shocked when we saw that there are over 30 study commissions into a number of questions shaping the future of our country, but there has never been one on the topic of "diversity and solidarity".

In the context of the popularity of right-wing populist parties all over Europe, this sort of commission would send out a signal. It would make it clear that Germany is aware of its oft-invoked role as a leader in the international community and is actively discussing a globally relevant phenomenon at the heart of its national politics. Furthermore, it would provide an opportunity to seriously address the fears felt right at the heart of society. A study commission such as this would therefore face the task of creating a guiding principle that does justice to this country's reality as a society of immigration.

Esra Küçük is a social scientist and managing director of the Young Islam Conference in Berlin.

Education for girls and women is still possible in Afghanistan, says Reinhard Eroes of the Kinderhilfe Afghanistan initiative. In interview with Elisa Rheinheimer, he talks about ... END_OF_DOCUMENT_TOKEN_TO_BE_REPLACED

We are in favour of human rights. But One Love armbands are self-righteous and ignore some fundamental issues. Stefan Buchen examines the debate surrounding the World Cup in Qatar END_OF_DOCUMENT_TOKEN_TO_BE_REPLACED

In Doha, Arabs from Morocco, Tunisia, Egypt and Algeria are gathering to celebrate the first ever FIFA World Cup to be held on Arab soil. The criticism from Europe? Over the top, ... END_OF_DOCUMENT_TOKEN_TO_BE_REPLACED

Canan Topcu came from Turkey to Germany as a child. In her essay, she describes how bothered she was by the racism she encountered in her country of origin when she travelled ... END_OF_DOCUMENT_TOKEN_TO_BE_REPLACED

All organisers use major sporting events like this year’s FIFA World Cup in Qatar primarily to advertise their country and promote a slick public image. This is not something we ... END_OF_DOCUMENT_TOKEN_TO_BE_REPLACED

A leading light of Israeli theatre, Ofir Henig has directed the Israel Festival and is the only female director to have been awarded the Israel Theatre Prize. These days, however ... END_OF_DOCUMENT_TOKEN_TO_BE_REPLACED
Author:
Shohreh Karimian
Date:
Mail:
Send via mail

END_OF_DOCUMENT_TOKEN_TO_BE_REPLACED
Social media
and networks
Subscribe to our
newsletter