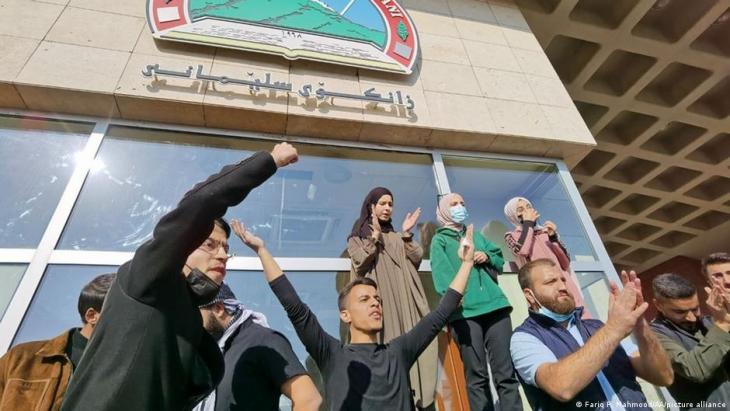 Young people in Iraqi Kurdistan
Turning towards religion or away from it?

Young people in northern Iraq are so disillusioned that many are trying to leave the country any way they can. Some fear widespread discontent could push people toward potentially dangerous religious fundamentalism. By Cathrin Schaer

Over the past few days, there has been yet another indicator of how dissatisfied the people of Iraqi Kurdistan are with their leaders.

Thousands of demonstrators, many of them students, took to the streets in the semi-autonomous northern Iraqi region to demand the restoration of financial stipends that local authorities stopped paying around 2014. During the protests, security forces used a water cannon, fired tear gas and then live bullets to disperse increasingly angry crowds.

This is not the only such indicator. Others include the death in November of 27 people in the English Channel, most of whom, British media have reported, appear to have been Kurds from Iraq. Additionally, many of the would-be asylum-seekers trapped on the border between Belarus and Poland are also Iraqi Kurds.

This has led outsiders to ask why so many Iraqi Kurdish people are so desperate to leave home that they would risk such a hazardous journey.

After all, at one stage, Iraqi Kurdistan – which operates independently from the central Iraqi government in many ways and is home to the country's Kurdish minority – was being described as "the new Dubai". It seemed prosperous, peaceful and business-friendly, especially in comparison to the rest of the country.

"But behind this propaganda, Kurdish society was falling apart," Kamal Chomani, a Kurdish student based in Germany, wrote for New Lines Magazine earlier this week. "Society was divided into two socioeconomic classes: one of the political elite, its patrons and their brokers, and the other consisting of the masses." 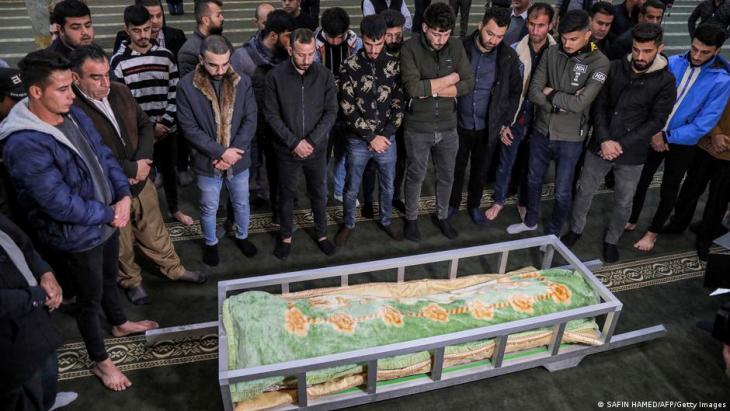 Exodus: desperate and disillusioned young Kurds are leaving Iraq in droves. According to British media, most of the 27 people who drowned attempting to cross the English Channel in November were Kurds from Iraq. Similarly, many of the would-be asylum-seekers on the border between Belarus and Poland are also Iraqi Kurds. Pictured here: men in a mosque stand around the repatriated body of 25-year-old Iraqi Kurdish migrant Gailan Diler, who died while trying to illegally cross into Poland via Belarus

Things began to change in earnest around 2014, a time of greater insecurity thanks to the rise of the extremist group known as the "Islamic State" as well as further political conflict with the federal government and a financial crisis. Almost two-thirds of Kurdish households were (and are) on the public payroll, and the government said it had run out of money to pay some sectors, including teaching and medical professionals.

The state of democracy in the semi-autonomous region has been laid bare over several elections, as it became evident to voters that the two parties holding the most power in the region – the Patriotic Union of Kurdistan, or PUK, and the Kurdistan Democratic Party, the KDP – didn't plan to give anything up.

The dream of a Kurdish homeland, a unifying idea that previously took precedence over other divisions, has also dimmed.

All of this has resulted in a youthful population that has lost hope of ever achieving political change or personal economic security. Around a quarter of the Iraqi Kurdish population, which is thought to be over 5 million, is aged between 18 and 34, and by 2018, the United Nations mission in Iraq reported, more than a fifth thought they would never get a job.

Now, some have expressed concerns that those frustrated young people may be turning elsewhere – to fundamentalist religion.

The majority of Kurdish Muslims are Sunni, and ultraconservative Sunni clerics, known as Salafists, have been active in the region since the 1950s. "Salaf" means ancestors, and Salafists advocate adherence to what they see as the original rules of Islam.

Often, the Salafist clerics have studied in Saudi Arabia or other Gulf countries where a similar conservatism is dominant. When they returned to Iraqi Kurdistan, they started Salafist schools and mosques which received funding from those nations. Kurdish Salafists often have a major presence on social media, and some also have their own religious satellite TV channels. 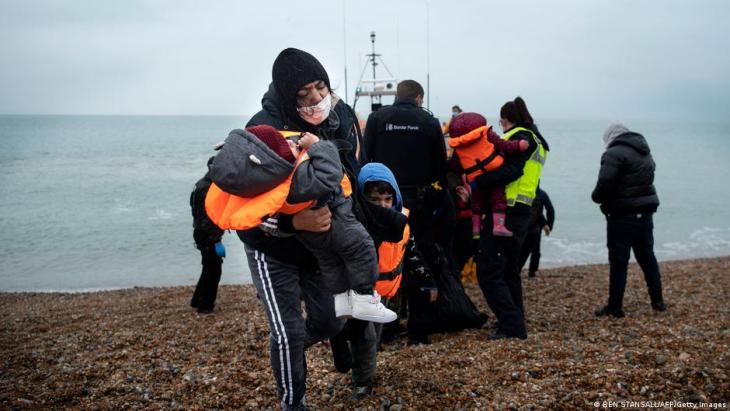 People are so desperate that they are willing to risk their lives and the lives of their children for a better life. The number of people attempting the dangerous Channel crossing from France to England continues to rise. Pictured here: a woman helps her children after being brought ashore by an RNLI lifeboat at a beach in Dungeness on the south-east coast of England

In the past, Salafist groups were behind terrorist attacks or supplied recruits to extremist organisations.

But more recently, "militant jihadi Salafism lacks collective support in Kurdistan," a 2019 Kurdish Studies report concluded. "However, there are a growing number of non-militant forms of Salafism in Kurdistan," it noted, adding that "Salafism is on the rise in [Iraqi Kurdistan] in multiple forms."

Experts have said this is partially because ruling political parties, the KDP and the PUK, have been more tolerant of Kurdish Salafist clerics, the majority of whom do not espouse violence. Instead, they emphasise obedience to political leadership – that's in contrast to local Islamic political parties, who form part of the opposition in the Iraqi Kurdish parliament and who have often challenged the current leadership.

"The authorities in the region support Salafism in order to weaken the Islamic parties," said Ibrahim Sadiq Malazada, a lecturer in sociology at Soran University in Iraqi Kurdistan, who has researched levels of religiosity among local youth. "But this is a mistake," he said, adding that he believes that religious conservatism has "ruined the tolerant and open Kurdish culture" and that conservative clerics are using the region's various crises and local youths for their own ends.

Muslih Irwani, a sociologist and head of the Public Policy Institute, a think tank in Erbil, said he saw it as a "new wave of return to Islam" among the younger generation. There were two forms of this. One was more traditional and politically neutral, Irwani explained. "The second approach is more radical … and is popular among those who are devastated by the political situation in Iraqi Kurdistan," he said.

But not everybody in the region agrees that dissatisfied Kurdish youth are in danger of religious radicalisation – at least, not right now.

"Young Kurdish people are angry at the current government, and they're angry at anyone that defends that government," says Soran Ahmad, a local journalist covering the student protests in Sulaymaniyah. "The Salafists defend the government; they say the ruler must be obeyed and the status quo protected, for the sake of stability and security."

For that reason, he said, many young Kurds don't like the Salafists. Additionally, Ahmad pointed out, the barbaric behaviour of the "Islamic State" terror group also did a lot to turn locals off religion. Although the majority are still religious, polling by the Arab Barometer in 2019 indicated that young Iraqis were actually becoming less so. 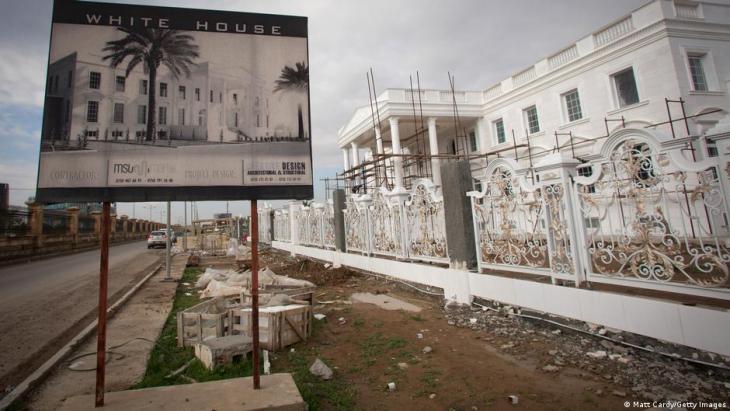 How the other half lives: a $20 million villa being built in Dream City, a new exclusive residential suburb of Erbil, Iraq. Despite Iraqi Kurdistan's image as a prosperous, peaceful and business-friendly region, the gulf between the haves and the have-nots is huge. "Society was divided into two socioeconomic classes: one of the political elite, its patrons and their brokers, and the other consisting of the masses," says Kamal Chomani, a Kurdish student based in Germany

"Salafism in Iraqi Kurdistan is not new," added Kamaran Palani, a fellow at the Middle East Research Institute in Erbil, who has researched the potential for violent extremism among young people in Iraqi Kurdistan and who is in contact with Salafist locals. "And I haven't seen a substantial change lately."

Palani explained that for an individual to turn to extremism in Iraqi Kurdistan, both "push and pull" factors needed to be present.

"Imagine being a 22-year-old recent graduate here," he said. "You can't get a job, you have limited prospects and you see other people graduating from European or private universities and living a very different, very affluent life. Of course, you become more vulnerable to mobilisation," said the Salahaddin University lecturer.

But this is also why, despite seeing little change in the numbers of youth attracted to the Salafist mosques, Palani has concerns for the future, concerns he worries are not shared by the authorities.

Around 2014, over 530 Iraqi Kurds are thought to have joined the "Islamic State" group. Palani was told by security sources that another 800 or so were caught before they could do so.

"But back in 2014, there was still some space and hope for young people here," said Palani. "What worries me now, in the current context, if the same thing were to happen again, we would have a lot more young people trying to join a group like the 'Islamic State.'"

The notorious U.S. prison camp is 20 years old. Over the years, several plans to close it have been rejected. For the detainees, little has changed in the last two decades. Oliver ... END_OF_DOCUMENT_TOKEN_TO_BE_REPLACED

Historically Iraq's Yazidi community was isolated, under-resourced and very conservative. Seven years after the "Islamic State" tragedy, the community is more open to the world – ... END_OF_DOCUMENT_TOKEN_TO_BE_REPLACED

Asef Bayat, professor of Sociology at the University of Illinois, Urbana-Champaign, has been studying revolutions and how they affect people since 1979. In his recent book, " ... END_OF_DOCUMENT_TOKEN_TO_BE_REPLACED

In this new bilingual edition, translated by Humphrey Davies, al-Jawbari, one of the thirteenth century's leading experts in skullduggery reveals all there is to know about the ... END_OF_DOCUMENT_TOKEN_TO_BE_REPLACED

In Iraq, returning families of IS fighters have to turn to local initiatives for help, as there is no official path home. Judit Neurink met with families on the ground END_OF_DOCUMENT_TOKEN_TO_BE_REPLACED
Author:
Cathrin Schaer
Date:
Mail:
Send via mail

END_OF_DOCUMENT_TOKEN_TO_BE_REPLACED
Social media
and networks
Subscribe to our
newsletter