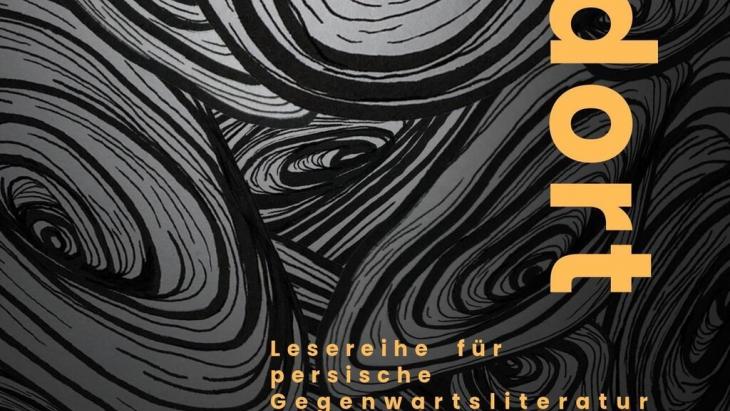 Literature by young Iranian authors is rare in German. Publisher and translator Arash Alborz aims to change this with his literary magazine, 'dort'. Do the first two editions live up to that promise? Gerrit Wustmann took a look for Qantara.de

"My father throws himself out of our living room window every day. He flies, quiet and swift, down the six floors below and crashes onto the pavement." These are the opening lines of The Baptism, a short story by Tehran-based author and journalist Masoud Riahi, whose work opens the second edition of dort, a new literary magazine published in German. The text is from Riahi’s fiction debut, released in 2022.

The narrator’s father smashes into the pavement, attracting onlookers, who throw coins at him, and as soon as evening falls, he and his son collect the alms, returning to their apartment happy – as long as it’s been a good day. Then, however, the police start making trouble, claiming there’s something fishy about this piece of suicidal theatre. Father and son are obliged to think up a new solution to keep food on the family’s table.

The story is as surreal as it is macabre; fittingly, Riahi prefixes the tale with a quote from Kafka. The story also sets the central theme: jumps (from balconies, or ladders) also feature in stories by Niloofar Nedaei and Sanaz Asadi, and can be interpreted in a number of ways in all three stories: metaphorically, ironically, literally, or all three at once. It’s this tongue-in-cheek ambiguity, often found in young Iranian fiction, which dort magazine is making accessible in Germany for the first time. They are all first translations.

Persian literature in German a rarity

Arash Alborz, initiator, publisher and translator based in Cologne, came up with the idea for the magazine a good ten years ago. ‘There’s just so little Persian literature available in German,’ he says. He wanted to change that. In the midst of the pandemic, he put out a call on Instagram for people to send him texts – without the usual restrictions. He wanted contributions both from established authors and writers who had yet to be published. 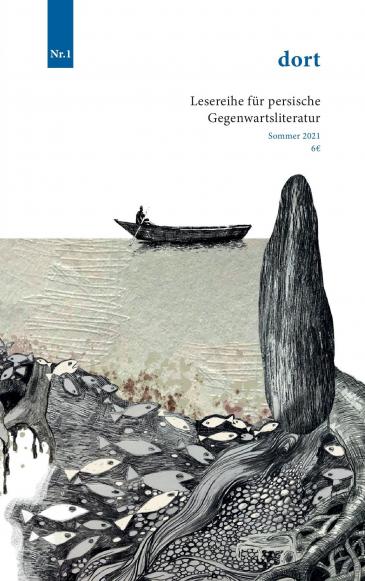 "'dort' showcases contemporary Persian literature in German. It is a platform for authors writing in Farsi to present their literature across linguistic and political borders," writes Cologne translator Arash Alborz on the website of the new literary magazine. "A reading series for German-speaking literature lovers who want to read stories by Persian-speaking authors. It is published three times a year and every edition features three short stories"

This broadened the spectrum and opened up the possibility of stumbling upon great literature that no one had heard about. After all, the younger generation in Iran does not have it easy. "Friends working for publishers and newspapers in Iran" provided the necessary help, Alborz explains.

Alborz and his small team received around fifty texts straight away: "Most of them – a good 90% – by women, I was surprised at that myself," says Alborz. Another thing stands out: almost all of the contributions in the first two editions of dort feature strong, surreal elements, immediately classifiable as weird fiction, a genre thriving in the U.S. today – think O. Henry prize-winners like Brian Evenson and Steve Rasnic Tem.

Strangely, in spite of Kafka, weird fiction is somewhat niche in Germany. Alborz asked around and discovered that it is currently a trend among young writers in Iran. Take, for instance, Sadegh Hedayat’s pioneering novel The Blind Owl, which remains very influential to this day – as well as Kafka and Rilke, both very popular on the literary scenes of Tehran, Isfahan and Shiraz.

"They say," writes Alborz writes in his foreword to the second edition, "that Persian literature has mastered the metaphorical, the ironic and the double or multiple meaning, and has done so for centuries. As early as in the verse of Omar Khayyam or Hafiz, you constantly encounter puzzles and secrets. The reason for this is centuries of political and social oppression." And this is clear in the stories that follow.

Yet they are not exclusive. They are easy to read, even if you’ve no connection to Iran or Persian literature. Like in Zahra Godarzi’s story Prophets Work No Miracles in the Dark: the narrator, a child of primary-school age, is frustrated because he’s not allowed to play the lead role in the school play, a part that wins the most attention – the Prophet. Instead, he plays God from behind the stage.

No one sees him, but the audience can hear his voice. This would be enough to make the story into a daring and humorous parody of religiosity and its all-too worldly laws, but, of course, it’s just the beginning. The portly school principal allows the narrator’s grandfather to marry him off to his second wife, which doesn’t go down at all well with the family of his first wife. To make matters worse he wants to slaughter the boy’s favourite chicken, a hen by the name of Sometimes.

This puts the narrator in a good negotiating position: he can set his conditions and sees himself inching closer to his goal of slipping into the role of the Prophet in the school play.

Zahra Godarzi’s pitch-black humour is cryptic and ambiguous, her writing is profoundly elegant (translated by Alborz no less elegantly) and entertaining; this is more than a bonus, because it makes you want to read more of this accomplished author’s work. The same applies to the pieces by Naghmeh Dadvar and Rafa Rostami, whose works round off the first edition of dort, published in autumn 2021.

These slim volumes are both a literary and a visual feast, with the stories accompanied by fittingly surrealist illustrations by Mehdi Aslaghi and photographs by Houtan Nourian. dort magazine should be of keen interest to any publisher on the lookout for new writers beyond the realm of western literature.

Iranian artist Parastou Forouhar has lived in Germany since 1991. Full of rage, just like the protesters, she hasn't yet given up on the idea of justice. By Julia Hitz END_OF_DOCUMENT_TOKEN_TO_BE_REPLACED

Unflattering terms were used at a German Football Association human rights congress aimed at "intensifying the discussion" ahead of the World Cup. One speaker in particular made ... END_OF_DOCUMENT_TOKEN_TO_BE_REPLACED

Fariduddin Attar’s "The Conference of the Birds", one of the seminal works of Islamic mysticism, has recently been published in sumptuously illustrated German translation. It ... END_OF_DOCUMENT_TOKEN_TO_BE_REPLACED

Egyptian authorities have Mada Masr in their sights once again after critical reporting. But the editor of the country's last independent news source is adamant they will continue ... END_OF_DOCUMENT_TOKEN_TO_BE_REPLACED

Like Christianity, Europe's history is one of migration. Both have strong roots in the Orient and in cultures thousands of years old. Cultural historian Bernhard Braun invites us ... END_OF_DOCUMENT_TOKEN_TO_BE_REPLACED
Author:
Gerrit Wustmann
Date:
Mail:
Send via mail

END_OF_DOCUMENT_TOKEN_TO_BE_REPLACED
Social media
and networks
Subscribe to our
newsletter