Young Turkish-German Footballers
For My Country, Against My Country

In their most recent friendly match, the Turkish national team won against Germany, with two goals from the Turkish-Germans Nuri Sahin and Halil Altintop. Has the German football association failed to integrate young talents of Turkish origin? André Tucic looks into the issue

In their most recent friendly match, the Turkish national team won against Germany, with two goals from the Turkish-Germans Nuri Sahin and Halil Altintop. Has the German football association failed to integrate young talents of Turkish origin? André Tucic looks into the issue

​​Istanbul, October 2005, Turkey versus Germany – a test-run for the world cup in 2006, which went severely wrong from the German point of view. The Turkish team beat the Germans 2:1.

The experts descend upon the two Turkish scorers – Nuri Sahin from the Sauerland is on the Borussia Dortmund team and Halil Altintop from Gelsenkirchen plays for Schalke 04. Two lads born, bred and trained in Germany, who still decided to play for their parents' country – Turkey.

A discussion that had long been seething below the surface finally erupted in public: critics complained that the German football association DFB had failed to take care of these young men, or that Germany was investing in training up players who later crossed over to play for Turkey.

Aside from Nuri Sahin and Halil Altintop there are more German-born professional footballers of Turkish origin who don't play for the DFB – such as Yildiray Bastürk, Ümit Davala, Ümit Karhan and Ilhan Mansiz.

But things can only get better: not long afterwards, the DFB did manage to win the odd Turkish footballer over to donning the German kit. And Malik Fathi from Hertha BSC Berlin is the first Turkish-German to play for the national team.

Fathi explains why he found it easy to choose the German team: "There was no alternative available, as the Turkish association hadn't shown any interest in me. So I didn't have to make a decision."

Stuttgart's shooting star Serdar Tasci adds: "I was born and bred in Germany. This is my footballing home."

But the question is, couldn't the DFB have recruited more talents like Fathi and Tasci? Germany is after all home to some three million Turkish and Turkish-German people. And the DFB goes through all the youth teams of the individual regions with a fine-toothed comb at training courses at the Duisburg-Wedau Sports School.

But it's not always the players alone who make decisions for or against the German team.

​​Turkish people involve their whole family in making decisions, says the DFB's integration officer Gül Keskinler. Germans have a different philosophy on life and are brought up differently, she comments. No one would think of asking the parents of an 18 or 20-year-old German player, but would leave the decision up to him.

"Sport is an instrument of integration and has a role to play in society. I see training Turkish footballers as part of this integration, which is an important contribution to international understanding. The key is to involve parents in decision-making processes, because it's often them who make decisions on behalf of young Turkish players."

Nuri Sahin was not to be persuaded. A mistake? Not necessarily. "I had offers from both national associations and I decided on Turkey, because I feel I'm a Turk and I've always dreamed of playing for Turkey", Sahin explains. 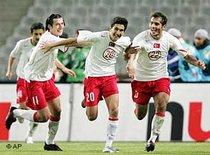 ​​"Of course I'm proud to play in the Bundesliga for Borussia Dortmund. But when it comes to the national team, I'd already made my decision as a kid," the young Turkish player adds.

And Halil Altintop? "When I was playing for Kaiserslautern the U21 national trainer (Uli) Stielike rang me up twice and tried to whet my appetite for the DFB, because of the high prestige. I may have been born in Germany, but by temperament I belong more to Turkey. The same goes for my brother Hamit. And don't forget our parents come from there."

So it looks like the DFB would have its work cut out to persuade these young men anyway. "If a Turkish boy thinks Turkish and feels Turkish, you can't change that, even with special attention and persuasion," stresses Frank Vogel, coordinator of the amateur and youth department at Hertha BSC Berlin.

Halil Altintop puts into words just how ambivalent the issue of national and footballing identity can sometimes be: "It was a great feeling scoring a goal for my country against my country."

And who knows, perhaps Malik Fathi and Serdar Tasci will score for the DFB at the next match between Germany and Turkey, and the recent German discussion will break out on the Bosporus.

Integration through Football
World Cup Passion Unifies Germans and Turks
Both times Germany has won World Cup games, Turkish soccer fans have celebrated the victory along with the Germans. Florian Blaschke spoke to researcher Faruk Sen about the World Cup as a new integration engine

Soccer Star Abbas Suan
No Arabs, No Goals – Soccer in Israel as a Metaphor
Although the Israeli Arab soccer player Suan is adored as a national hero from Haifa to Tel Aviv, tolerance displayed towards Israel's Arab citizens remains minimal. By Moshe Zimmermann

END_OF_DOCUMENT_TOKEN_TO_BE_REPLACED
Social media
and networks
Subscribe to our
newsletter