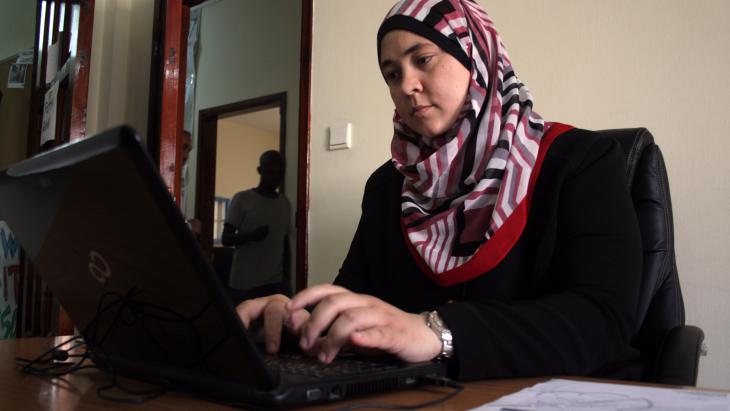 Young women and start-ups in Gaza
Getting down to business

Twelve months ago, Gaza was mired in a conflict that left 2,251 Palestinians dead and more than 100,000 homeless. The economy of the Gaza Strip has not even begun to make a recovery. Despite this bleak outlook, some young people – and some young women in particular – refuse to give in and are looking to launch start-up companies. By Ylenia Gostoli

A year after the start of last summer's 52-day war, the Gaza Strip has far from recovered. The Israeli and Egyptian blockades have strangled its economy, which, warns the World Bank, is "on the verge of collapse". Unemployment is the highest in the world, and as high as 60 per cent among young people. It is Gaza's youth who are bearing the brunt of successive crises, stuck in "the world's largest prison" with few opportunities to look for a better future elsewhere. But some young people in Gaza have found a different way to reach out to the world and regain the prospect of a future: launching an Internet start-up.

In a co-working space in one of the towers by the sea port in Gaza City, a group of young coders, IT engineers and web designers are typing away at their dream of building the next Silicon Valley. The next Google, they believe, may hail from Gaza.

On a sunny June afternoon, 32-year-old Nawal Abu Sultan was presenting her project to an audience of about 20 young students and wannabe entrepreneurs. It's good practice for when, she hopes, she will be pitching to investors in a few months.

Currently a science and technology teacher, her idea was selected from those put forward by 40 teams that participated in the "Gaza Challenge" earlier this year. She is now competing with 18 other budding entrepreneurs for the next round of investment available through Gaza Sky Geeks, the first start-up accelerator (post-investment business mentorship programme) in the Gaza Strip. At the beginning of 2014, regional investors provided initial investments that ranged from $14,000 to $20,000 to four start-ups from the Gaza Strip. Nawal hopes that her own Menaship will be next.

Aimed at students from the MENA region, Menaship will help them navigate through scholarship opportunities to study abroad, with tips and tutorials to take them through the application process. "There are a lot of students in Gaza who are looking to complete their studies abroad, and they often find the application process daunting," said Nawal, who was inspired by her own experience of growing up in besieged Gaza, where getting a scholarship to study away from home is one of the few ways available to young people to further their career prospects, and indeed, leave. 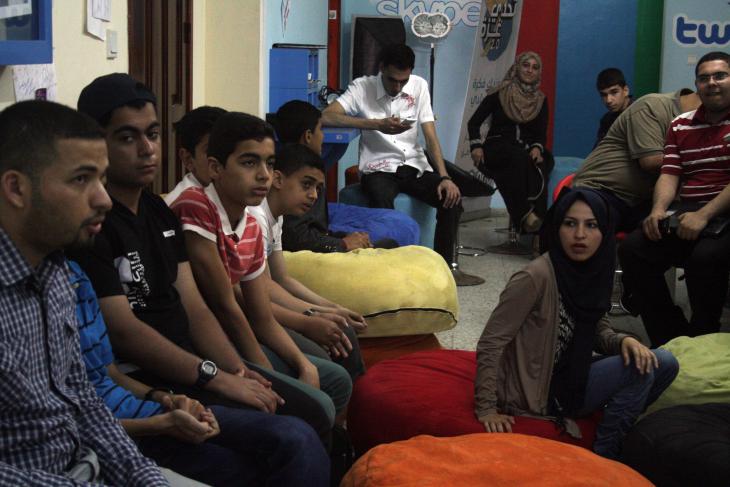 Young people listen to a presentation at the Gaza Sky Geeks co-working space. "What we see in Gaza is that it's a really great place to incubate an idea. Costs are much lower than elsewhere, the amount of investment you receive is the same as you'd receive in Jordan," says Iliana Montauk, director of start-up accelerator Gaza Sky Geeks

A generation under siege

Since Hamas took control of Gaza in 2007, Israel has been imposing a strict blockade on the strip, which includes restrictions on movement. Getting a permit to leave through the Israeli-controlled Erez border crossing requires a medical referral or an invitation, and it takes from two weeks to a month to get a response. The Rafah border has been opened for only 18 days since the October Sinai attacks that killed at least 30 Egyptian security personnel, leaving students and patients stranded. According to Maher Abu Sabha, director of the border crossings in Gaza, around 90,000 people who have applied to travel are stuck in Gaza.

In the meantime, not a single one of the 19,000 homes destroyed during the 52-day war has been rebuilt, and only a quarter of the aid pledged by international donors in Cairo last October has so far been released. 100,000 Gazans remain homeless, and electricity runs only six to eight hours a day as Gaza's power plant was only partially repaired.

In this climate, it is perhaps not surprising that a great number of young people in Gaza are looking for any opportunity to leave. "We are not only talking about poor youth, hopeless youth, but middle class families. This shows that people are trying to flee Gaza for a more secure place," said Ramy Abdu, director of the Gaza-based human rights watchdog Euro-Med Monitor. "The 2014 assault pushed the people from a state of uncertainty about the future of Gaza, to certainty that things in Gaza will not improve." 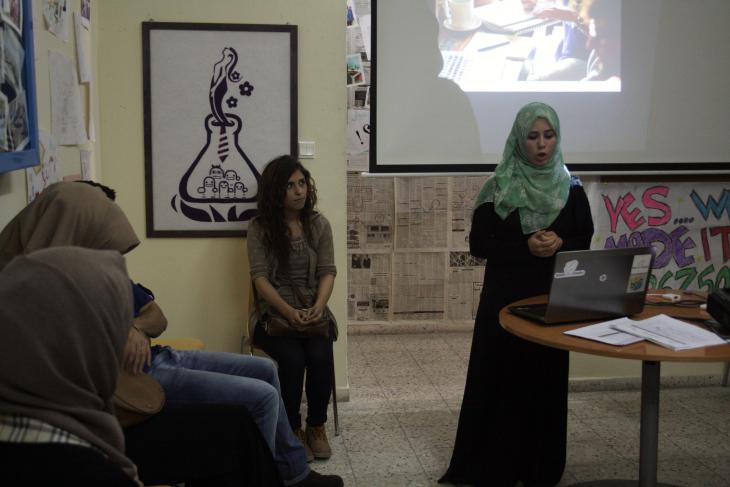 The tech sector worldwide is normally male-dominated, writes Ylenia Gostoli, but in the Gaza Strip, a large number of those committing to it are women. "Out of the 18 teams that we accepted into incubation this year, five are led by women, and another eight have women co-founders," says Iliana Montauk

In Gaza, literacy rates are high (approx. 97 per cent), particularly among young people. One fifth of the population has at least a bachelor degree or a professional diploma, and women lag only one or two percentage points behind men. Comparatively more Palestinians have degrees in Gaza than in the West Bank.

However, there remains a huge gap between men and women when it comes to overall participation in the workforce. Women still have fewer prospects than men of finding work after university on a labour market where opportunities are already scarce.

The tech sector worldwide is normally male-dominated. But here, a staggering number of those committing to it are women. "Out of the 18 teams that we accepted into incubation this year, five are led by women, and another eight have women co-founders," Iliana Montauk, director of Gaza Sky Geeks, told Qantara.de.

"But families tend to play a bigger decision-making role for women than they do for men," said Montauk. "Launching a start-up eats up financial resources as it may take one or two years before it generates any income." In a place like Gaza where more than two-thirds of the population is food insecure or vulnerable to food insecurity, many families would rather see their daughters work than launch a start-up.

"What we see in Gaza is that it's a really great place to incubate an idea. Costs are much lower than elsewhere, the amount of investment you receive is the same as you'd receive in Jordan," said Montauk.

"So if there is a conflict like the one last summer and you end up not being able to work for a few weeks, that's ok at that stage. At a more developed stage, where you have many users or business to business clients, you absolutely have to ensure business continuity," she added. For this reason the nascent start-ups are looking to hire part of their teams outside Gaza, or at setting up agreements with companies in the West Bank that will be cross-trained and able to pick up the work if necessary.

21-year-olds Salam Dalloul, Abeer al-Shaer and Amal al-Jarousha met at Gaza University, where they study software engineering. A few months ago, they started a Facebook page giving women advice on diet and fitness. The page got 3 million followers from across the Arab world, and they are now turning it into an app called Dietii.

"We took what we thought could be the most profitable idea," Salam said, "and we're here to learn because in the future we want to have our own company." When asked whether the business will be based in Gaza, the response is clear: "Of course I mean here in Gaza. I'm not going anywhere, this is my homeland."

Home
Print
Newsletter
More on this topic
Israelis and Palestinians mark one year since Gaza warRebuilding Gaza: The back of the Gazan economy has been brokenRebuilding Gaza: Left out in the coldInterview with Raji Sourani in Gaza: "We are just soft targets: we are very cheap"
Related Topics
Economy, Fatah, Gaza War, Hamas, Israeli-Palestinian conflict, Middle East peace process
All Topics

Her grandparents are Jews – born in Tunisia and Algeria. Director Cleo Cohen has now broken the silence about this with a very personal debut. By Nadine Wojcik END_OF_DOCUMENT_TOKEN_TO_BE_REPLACED

Every year in December, the team at Qantara.de takes a look back at the articles that proved most popular with our readers. This year is no different. Here is a run-down of the ... END_OF_DOCUMENT_TOKEN_TO_BE_REPLACED

Christmas in Bethlehem is usually a festive and colourful season. This year, festivities in the Palestinian town are set to return – but the COVID-19 pandemic is still casting a ... END_OF_DOCUMENT_TOKEN_TO_BE_REPLACED

Haifa is known for being Israel’s exemplary model of relative harmony between Jewish and Palestinian citizens. Its unique "Holiday of Holidays" is a joyous, multicultural event ... END_OF_DOCUMENT_TOKEN_TO_BE_REPLACED

May 2021 saw a deadly flare-up in Israel-Hamas hostilities, with eruptions of extreme violence in several of Israel's 'mixed' cities. Two weeks later, a broad-spectrum governing ... END_OF_DOCUMENT_TOKEN_TO_BE_REPLACED

Ankara is seeking to improve its relations with several states in the Middle East – such as the United Arab Emirates, Egypt and Israel. There are several reasons for this. ... END_OF_DOCUMENT_TOKEN_TO_BE_REPLACED
Author:
Ylenia Gostoli
Date:
Mail:
Send via mail

END_OF_DOCUMENT_TOKEN_TO_BE_REPLACED
Social media
and networks
Subscribe to our
newsletter