Life in the Subjunctive, Death in the Sea

The attempted crossing to Europe is the last journey many Africans ever make. Newspaper reports on this illegal migration have little to say about the motives and hopes of those who die. Moroccan writer Youssouf Amin Elalamy's book, Les Clandestins, gives their dreams a literary echo. Moritz Behrendt spoke to the author about his book

The attempted crossing to Europe is the last journey many Africans ever make. Newspaper reports on this illegal migration have little to say about the motives and hopes of those who die. Moroccan writer Youssouf Amine Elalamy's book, Les Clandestins, gives their dreams a literary echo. Moritz Behrendt spoke to the author about his book 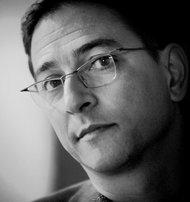 Youssouf Amine Elalamy has published five books, three of which are novels. He lives and works in Rabat, Morocco

​​ The story is quickly told. Or perhaps it would be more accurate to say the announcement is quickly made, because the deaths of 13 boat people seldom merits more than a few lines in our media. Twelve men and a pregnant woman have been drowned in the Mediterranean whilst attempting an illegal crossing to Europe, there bodies washed ashore on the beach of a small town on the Moroccan coast.

It was a similarly worded report that caught Youssouf Amine Elalamy's eye in the miscellaneous section of a Moroccan newspaper, he tells me. "They were simply added to the number of similar deaths for that year; the dead reduced to no more than a statistic." It was something, however, Elalamy did not want to simply accept and forget about. After all, literature has the power to focus on the human dimension of such events.

A life, too small

Indeed, what the writer, born in 1961, does is to turn the meagre lines of this news report into a poetic panorama of life, love – and death in the sea. "Maybe they have a dream that is a little too big and a life that is a little too small and too hard to bear" writes the author and brings the "stranded" thirteen back to life in a series of short chapters.

​​ There is Moulay Abslam, for instance, who always told stories, like the one about the man who began writing books because he had no money to buy any. Or the dark-skinned Abdou, known as "Midnight", who, in spite of having a degree, has been unable to find work. He is so ashamed of the fact that every morning he dresses up in his best shirt and shoes and pretends to go to work. Until, that is, his shoes become so worn out that he cannot endure the situation any longer.

In Morocco they have a name for people like Abdou: "diplomés chomeurs". They are the unemployed graduates who regularly demonstrate in front of the parliament in the capital city, Rabat, in the hope of drawing attention to their fate. Though this features in Elalamy's book (which, so far, is available in the original French and in German only), it is the only place in the novel where reference is made to a specifically Moroccan context. With this one exception, Elalamy's deftly sketched themes are universal in their relevance: loss of work, pregnancy outside marriage, feelings of constriction brought about by social norms and economic necessity.

Desperate yearning for a new life

Despite these straightforward and understandable themes "Stranded" is not an easy read, something which, given the tragic subject matter, should not be taken as a criticism. For one thing, there are the constant changes in perspective. One moment we have one of the drowned telling us how the boat capsizes; then what reads like a farewell letter. In several chapters we find the relatives trying to make sense of the deaths of their loved ones, whilst in yet another passage we are given a technically precise description by a photographer of how he took his pictures of the corpses on the beach.

​​ In none of the stories does the author probe too deeply; maybe this is due to the fact that everything is in the subjunctive. The author indicates how it could have been, how those thirteen may have been so desperate for a new life that they were willing to venture all aboard a leaky boat on the Mediterranean Sea.

The constant use of repetition means that the book does not have an easy flow. Whole paragraphs are repeated; some single words and phrases repeated several times.

"The repetition should give a feeling of claustrophobia," the author explains, it is meant to create a sense of being closed in, it reflects the movement, the dancing and breaking of the waves in the sea, waves that do not let one go, but which exert their fascination on all who see them.

Even if from time to time the reader may tend to think that Elalamy is concerned with overly impressing by showing off his mastery of language and his stylistic diversity – and there is no doubt that he can write – by the final chapter at the latest the reader is left in no doubt as to how important his subject matter is to the writer. "They are drowned." For Elalamy, this baldly expressed fact underlies and overshadows all the linguistic showiness.

The small publishing house of "Donata Kinzelbach" is to be thanked for bringing Elalamy's praiseworthy novel to a German public. The subject matter has lost nothing of its relevance and topicality over the nine years that have passed since publication of the original French language version of the book.

Exodus from Africa
The Search for a Better Life
Those who risk their lives to trek thousands of kilometres through the Sahara desert to get to the North African coast and make their way to Europe must have sound reasons for doing so. In his commentary, Dominic Johnson names them

END_OF_DOCUMENT_TOKEN_TO_BE_REPLACED
Social media
and networks
Subscribe to our
newsletter