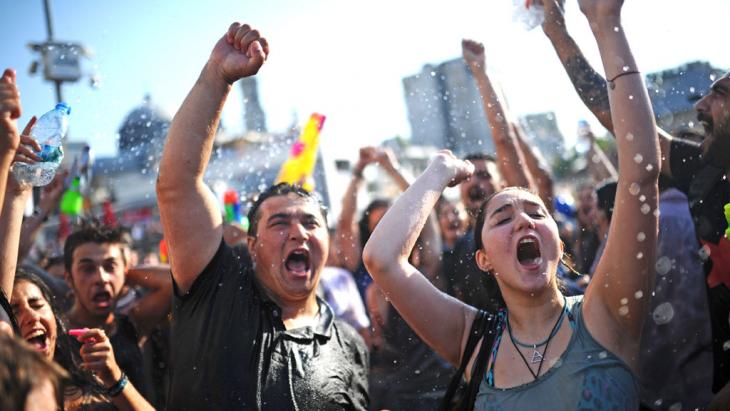 The Gezi Park protests in Turkey may have died down, but the social commitment of many young people is still high, and their battle for self-determination and participation continues. An overview by Anna Esser in Istanbul

It's a rainy winter day, and Sezgin is tramping through Istanbul's Gezi Park and having a look around. He's one of the young people who demonstrated here for the preservation of the park and against the Turkish government in the summer of 2013. The diminutive man has wrapped himself up against the cold in his green parka, his hair is tied back, his eyes restlessly scout the area.

"It was so great last summer," he says. Great? There were six fatalities, and more than 8,000 people injured. The police tackled the protest with disproportionate brutality. Officers made countless arrests and many people were charged; even doctors, lawyers and pharmacists who helped the demonstrators were pursued through the courts. To this day, many of those detained still do not know what they are being accused of.

So what was so "great" about it? "Because for the first time, we experienced co-determination and solidarity," says Sezgin. And indeed, this was the summer that Turkey's young generation discovered for the first time that it is possible to initiate change. 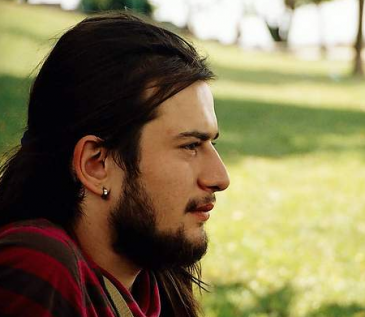 Many members of the older generation showed solidarity with the protesters. All of a sudden, it didn't matter where someone came from or who someone was. There was a sense of freedom and cohesion, of the kind that young people in Turkey had not yet encountered. In the end, Gezi Park was not modified. A right to personal freedom and participation – that's what Sezgin and his many fellow activists want. That's how they imagine Europe to be. That's why they'd like to travel, study abroad for a term or emigrate forever. Sezgin would also like to leave Turkey.

A desire for European-style conditions

He's an English teacher, but he doesn't have a permanent job at the moment. Instead, he works the odd shift in a book shop or guides people around exhibitions. What he'd like to do most is travel around Europe on his bicycle, but it's unlikely that he'd get the necessary visas.

Although the EU's image in Turkey has been tarnished by its border policies and economic woes and even though this negative image has taken a certain shine off the idea of becoming a member of the bloc, many Turks nevertheless yearn for living standards and conditions similar to those enjoyed in Europe.

Last summer, the young generation was just how Europe would like Turkey to be: democratic, courageous, tolerant, united. Now, as a new bribery scandal rears its head, the European Union is wagging its finger yet again: "Watch out, otherwise you won't get in!" But people in Turkey have other things on their minds right now.

At present, everyone is talking about the shoe boxes stuffed with money found at the house of the director of the state-owned Halk-Bank, about a truck laden with weapons on its way to Syria, about claims that the water in the water canons used to clear demonstrators off the streets contained CS gas (although the government has repeatedly denied this) and about all the other impenetrable corruption scandals, intrigues and conspiracy theories in the country.

Stroll along Istiklal Street in the heart of Istanbul, the city's major shopping boulevard that leads to Taksim Square, and there's a sense that young people are once again applying themselves to their own personal everyday concerns. There are no big demonstrations anymore. 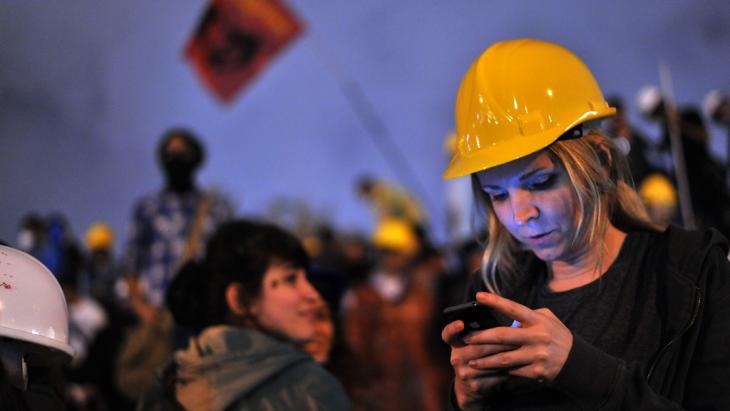 Resistance to corruption and unwanted urban development: last summer, millions of people across Turkey protested against a planned construction project in Istanbul's Gezi Park, which had the support of Prime Minister Erdogan

But the rallies haven't stopped entirely. They are just smaller in scale. Nevertheless, the police presence is always immense. The government has succeeded in intimidating the people. They are afraid of the truncheons, afraid of losing their jobs, of being locked up and held in custody for years. They fear losing their university grant or place in a hall of residence. After all, this has happened to dozens of people they know. But that's just one side, the more obvious one that can be observed from Europe.

The other side is more difficult to see. "Actually, the government isn't all that important. It's much more important that we move ourselves on." Sezgin wants to go to Kadiköy, a district in what's known as the city's Asian Side, where several months ago, young people occupied a house for the first time and turned it into an arts and culture centre.

Not just in Istanbul, but also in many other parts of the nation, groups have been set up to campaign for the preservation of a particular neighbourhood, to bring donated clothing to earthquake victims in Van or to make documentary films, for example.

Overall, the young generation is much more socially active than in the past. Aid organisations did exist before the protests, for the care of rape victims, for example, to campaign against the discrimination faced by homosexuals and transsexuals, or to lobby for the preservation of woodland in the north of Istanbul that had been earmarked for clearing to allow the construction of the third bridge over the Bosporus. But since last summer, people are getting more agitated about a larger number of issues, and the commitment that comes on the heels of this indignation is also growing. 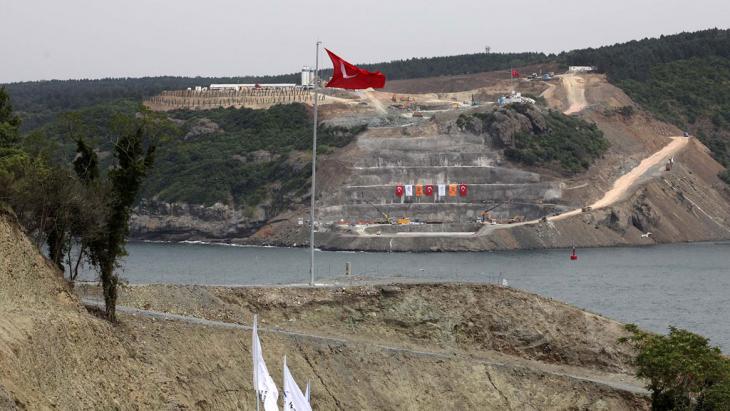 Forcing nature to take a back seat: with the construction of the third bridge over the Bosporus, experts agree that the last remaining third of woodland belonging to the City of Istanbul will be swallowed up by concrete and steel. Once residential areas are built and companies settle in the area around the bridge, traffic will increase, further exacerbating the negative impact on the local environment

What does all this have to do with Europe? A great deal. Because it shows that young people here have the same desires and demands as those in Germany, Italy, Poland or anywhere else in the EU. They've begun to grapple with the realities of their own lives, and want the same opportunities as young EU citizens.

"We have to take positive steps for ourselves," says Sezgin. "You can't expect anything from the politicians, that's clear." This is why whenever he has time, he travels out to a garden outside the city to tend small vegetable patches with people who share his interests and to learn how to make his own fertiliser, even on his own balcony at home.

The image of the young generation has been transformed. There are men and women everywhere who could just as easily be at home in Europe, people who love their city and their nation, but who also yearn for change.

They've had enough of megalomaniac construction projects, they want to express their views freely, demonstrate and live the way they want to live. And they yearn for nature and an appropriate standard of living, for community and quite simply, for tranquillity. This is why they are forming new groups where they discuss equality, neighbourliness, and the planting of seedlings on a small grass verge.

The Turkish-born writer Zafer Senocak once said that "the pieces of the mosaic are shifting; Erdogan is trying to stop them moving somehow". But he doesn't seem to be succeeding; the spirit of Gezi is the spirit of Europe. And like a genie, it simply won't be stuffed back into the bottle, not even by force.

A major gathering has been planned for mid-January at an arts and culture centre in Kadiköy, an opportunity to discuss small-scale resistance to manic urbanisation, paternalism and state repression. Sezgin will be attending.

Home
Print
Newsletter
More on this topic
"Open Forums" in Turkey: New Forms of ParticipationProtests against Construction Projects in Istanbul: A Government Addicted to SuperlativesProtests in Turkey: The Intolerance of Others
Related Topics
Democracy and civil society, Gezi Park protests, Human rights, Places of Dialogue, Taksim Square
All Topics

A wedding extravaganza of bright colours, flowers, feasting and dancing, yet the bride, Nefie Eminkova, who comes from Bulgaria's Pomak – Muslim – minority, can see none of it. ... END_OF_DOCUMENT_TOKEN_TO_BE_REPLACED

As the Western world emerges from a holiday season made less festive by COVID-19, millions of children in Afghanistan are starting 2022 facing the prospect of famine, illness, and ... END_OF_DOCUMENT_TOKEN_TO_BE_REPLACED

Research project "The Global Qur'an", brainchild of Professor of Islamic Studies Johanna Pink and sponsored by the European Research Council, analyses the history and ... END_OF_DOCUMENT_TOKEN_TO_BE_REPLACED

Every year in December, the team at Qantara.de takes a look back at the articles that proved most popular with our readers. This year is no different. Here is a run-down of the ... END_OF_DOCUMENT_TOKEN_TO_BE_REPLACED

Jesus – Issa in Arabic – doesn’t merely enjoy the highest place among the prophets in the Koran. He is also revered in Islam’s mystical tradition for his message of love and mercy ... END_OF_DOCUMENT_TOKEN_TO_BE_REPLACED

The military in Sudan has never waged war against a neighbour, but it has already staged 17 coups. Tens of thousands of people are risking their lives to oust the military by ... END_OF_DOCUMENT_TOKEN_TO_BE_REPLACED
Author:
Anna Esser
Date:
Mail:
Send via mail

END_OF_DOCUMENT_TOKEN_TO_BE_REPLACED
Social media
and networks
Subscribe to our
newsletter