Research in Turkey has revealed that the annual growth rates of MSMEs that use the Internet exceed those of their more conservative peers by a factor of seven. Programmes that aim to support young business should therefore emphasise digital skills and facilitate funding for investment in information and communication technology (ICT).

However, unless progress is made on eliminating structural development constraints, educational reform, labour market programmes and MSME support alone are not going to help reduce youth unemployment significantly. Because of the low level of growth in most MENA countries, new jobs are not created fast enough to meet the needs of a growing population. This is due not only to the political instability of the countries concerned. Another serious challenge is international competitiveness.

The productivity of businesses in Tunisia and Egypt, for instance, virtually did not increase over a 35-year assessment period. By contrast, firms in India, Mexico and Turkey doubled or trebled their productivity in the same time-frame. One reason, of course, that the digital economy is less developed than it is in other emerging markets. People with ICT skills are rare, and the digital infrastructure still has huge gaps. 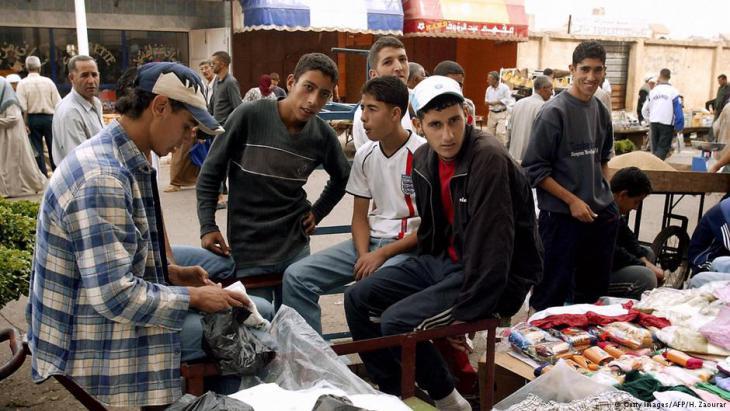 What career prospects? "In the past, the state apparatus used to serve as an overflow basin for the annual flood of young people newly entering the labour market. In view of reduced tax revenues and nascent structural reforms, the public sector is increasingly unable to play that role," comments Nassir Djafari

The economic dynamism of the private sector is also hampered by obstacles to free competition. A handful of companies enjoy considerable privileges due to their good relations with government decision-makers.

These politically-linked enterprises have easier access to subsidised land purchases, bank loans or investments in economic sectors that are protected from foreign competition. In addition, there is ordinary corruption, which is a significant cost factor, especially for small and medium-sized enterprises.

Low economic diversification is another challenge. Except in the oil-rich Gulf monarchies, an average of one in three economically active people work in agriculture, but this sector accounts for only 12% of gross domestic product (GDP) today. The manufacturing sector's contribution to GDP in the MENA countries – at an average of only around 10% – is low and has been flat-lining or even declining for years.

This is due partly to the failure of the state-controlled industrialisation model launched in the 1960s and partly to the free trade agreement with the European Union, which has resulted in the loss of many jobs, especially in labour-intensive sectors. The majority of people in gainful employment work in services today – in jobs that require comparatively simple skills. Most workers have only low value-adding jobs, often in the informal sector.

Without broad-based economic growth, youth unemployment cannot be sustainably reduced. So, support for employment-intensive sectors such as MSME is vitally important. But it is not enough just to create more jobs; they also need to be better jobs. Otherwise, it will be impossible for a self-sustaining economic process to gain momentum.

It is striking that the region is largely unprepared to make use of digital technologies. This world region is at risk of falling even further behind in terms of international competitiveness, and that would exacerbate unemployment.

It is thus imperative that the education system should deliver more practical training geared to the needs of the economy, especially the private sector. Above all, an intermediate level of technical qualifications needs to be created. For this to happen, training courses in which digital competence and information and communication technologies are learnt need to be established.  This also presupposes a re-thinking among young people, so that non-academic training programmes lose their stigma.

The integration of women in the labour market, which has already been initiated, is not just a matter of fairness. It is essential if the MENA countries are to realise their full economic potential.

Unless accompanied by structural reforms aimed at removing obstacles to private-sector development and competition and paving the way for economic diversification, the impact of educational reforms and labour market programmes will remain limited.

Political analyst Taqadum al-Khatib argues that Egypt can, in co-ordination with its European partners, develop a common vision to solve the complex conflict in Libya. For this to ... END_OF_DOCUMENT_TOKEN_TO_BE_REPLACED

The upheavals of the past year in the MENA region are arguably as momentous as those of the Arab Spring in 2011. Yet perhaps the biggest difference is that our interest seems to ... END_OF_DOCUMENT_TOKEN_TO_BE_REPLACED

In 2019, the long-running Penguin Classics series released its first novel translated from Arabic: Tawfiq al-Hakim’s "Return of the Spirit", conveyed into English by William ... END_OF_DOCUMENT_TOKEN_TO_BE_REPLACED

Equality in divorce, a ban on polygamy: reformers of Islamic family law have a clear agenda. They are exploiting the ambiguity of traditional jurisprudence. By Joseph Croitoru END_OF_DOCUMENT_TOKEN_TO_BE_REPLACED

Decades of oil exports have completely destabilised culture and politics in the Middle East. Speaking with Lena Bopp, the renowned writer Amin Maalouf says that the distorted ... END_OF_DOCUMENT_TOKEN_TO_BE_REPLACED