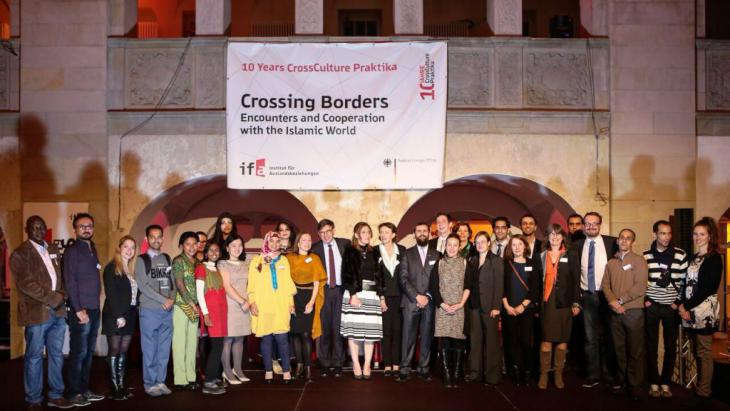 For the past ten years, young professionals from Islamic countries and from Germany have been able to immerse themselves in a foreign culture for three months as part of a internship programme run by the Institute for Foreign Cultural Relations (ifa). The programme has just celebrated its tenth anniversary. By Fabian Pianka

The CrossCulture internship programme provides young professionals from 32 Islamic countries – spanning from Mauritania, through the Middle East and Central Asia, all the way to Indonesia – as well as their counterparts from Germany with the opportunity of living and working for a limited time in a foreign culture. Since 2005, some 450 internships have been granted by the Institute of Foreign Cultural Relations, which maintains a partnership with the German Foreign Office. The programme not only enables the interns to expand their personal and professional skills, but also to promote intercultural dialogue within civil society in their respective home countries.

Around 200 former interns and alumni of the CrossCulture programme, both from Muslim countries and from Germany, gathered together with guests from the fields of politics and culture for anniversary celebrations in Berlin.

The event was held, under the motto ″Crossing Borders – Encounters and Cooperation with the Islamic World″, at the historic Oderberger Strasse bathhouse, reuniting old and new friends from a variety of cultures. All current and former CrossCulture interns are united by a common attitude: they view intercultural exchange as an opportunity for further personal development.

The event opened with a speech by ifa Secretary General Roland Graetz in which he pointed out that the CrossCulture programme has established a permanent bond between people from Germany and the Islamic world. Even after completing their stay abroad, many former interns have maintained contact with each other and with their partner organisations in Germany. This has resulted in the growth of a significant network of contacts in the areas of media, art, politics and civil society. These personal contacts are highly valuable. ″Digital forums cannot replace face-to-face encounters,″ said Eva Sodeik-Zecha, head of the CrossCulture programme.

Cultural intelligence more important than ever

Andreas Goergen, Director-General for Culture and Communication with the German Foreign Office, and the German-Iraqi writer Abbas Khider discussed the issue of flight and migration and the challenges posed by the current refugee crisis.

″How we deal with refugees is something that must be addressed at a societal level,″ stressed Goergen. Of utmost importance here is the need for what he terms ″cultural intelligence,″ which also entails ″empathy for the experiences and traumas″ of refugees. 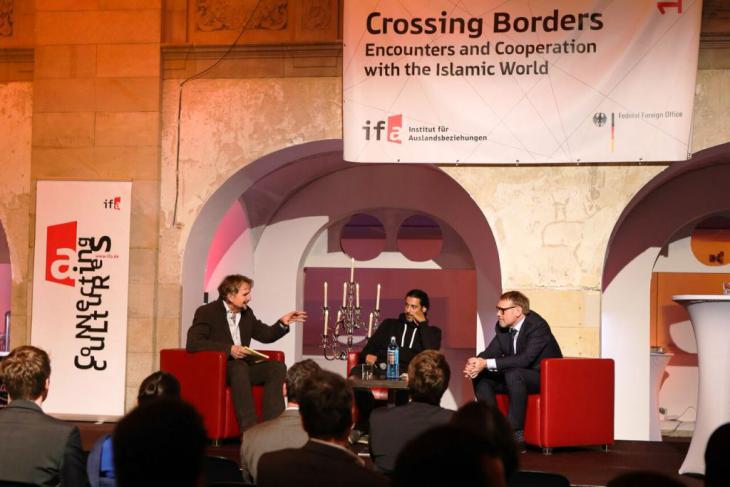 Growing significance of intercultural dialogue: ″cultural intelligence″ – which also includes ″empathy for the experiences and traumas” of refugees – is particularly important in times of political upheaval, emphasised Andreas Goergen, Director-General of Culture and Communication with the German Foreign Office

Such empathy for life under a dictatorship can be found in the latest novel by Abbas Khider, ″Brief in die Auberginenrepublik″ (Letter to the Aubergine Republic), which is set in Iraq during the era of Saddam Hussein. Khider, who settled in Germany in 2000 and subsequently studied literature and philosophy in Munich, praised the emergence of Germany's ″welcome culture″ for refugees. He nonetheless complained about defamatory outbursts by politicians, intentionally aimed at calling into question the validity of such a culture.

Many of the interns expressed the desire to expand the CrossCulture programme in the future to include additional countries and cultures. More people should be given the opportunity to have this special experience and to establish intercultural friendships. The artist Katrin Stroebel, who completed her CrossCulture internship in Morocco in 2006, said, ″It is very important to travel to other countries in order to learn. During my time in Morocco, I learned so much about the country. Having a different perspective also let me see Europe with new eyes.″ She feels that Germans maintain ″often false or naive ideas about Arab countries.″

Adam Ashab from Jordan has also built a bridge between two cultures. The intern is currently working in the office of a member of the German Bundestag. He sees the value of the cultural exchange in being able to ″experience the best of both worlds, the Orient and the Occident. ″

Dalia Hatuqa is an experienced journalist who has reported on the Israeli-Palestinian conflict from Ramallah, Washington DC and Amman. A writer for Time Magazine, Foreign Affairs ... END_OF_DOCUMENT_TOKEN_TO_BE_REPLACED

Since President Abdul Fattah al-Sisi seized power in Egypt in 2013, he has ruled the country with an iron fist. Civil society, opposition and free press struggle to survive. Tens ... END_OF_DOCUMENT_TOKEN_TO_BE_REPLACED

Many Turks are dissatisfied with the international status of their country. At the same time, opinion polls reveal great scepticism among the Turkish population towards the USA. ... END_OF_DOCUMENT_TOKEN_TO_BE_REPLACED

The German government is planning to legalise cannabis before the end of this legislative period. So what does Islam have to say about its consumption? Will changing the law alter ... END_OF_DOCUMENT_TOKEN_TO_BE_REPLACED

END_OF_DOCUMENT_TOKEN_TO_BE_REPLACED
Social media
and networks
Subscribe to our
newsletter