Zenab El-Khatib is just 15 years old, but is already heralded for her pioneering role. After all, it is still unusual to see a woman running for a goal while wearing a headscarf. But not for Zenab and the Danish U-16 national football team. A portrait by André Tucic 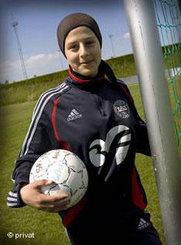 If she hadn't been allowed to play with her headscarf, she would have stopped altogether, Zenab says

​​She is fast as lightning, nimble, and a strong header with the ball. Not surprisingly, the 15-year-old Muslim girl of Palestinian descent is the most promising forward talent of the Danish U-16 national football team. Within a short time, Zenab El-Khatib has unleashed a media frenzy that has even reached beyond the borders of Denmark.

It is rather unusual that women's football receives so much public attention, especially for the junior category. Yet, there is far more to report about Zenab than just her skills with the ball and her pronounced instinct for scoring goals. The Lebanese-born Dane plays wearing a headscarf – sometimes a dark brown one, at other times a white one. "That was my first personal decision. My parents had nothing to do with it," Zenab makes clear.

A little more than a year ago, when she decided to wear a headscarf, none of her teammates in the B1909/Fjordager IF home team in Odens ever gave her a critical glance. Neither did anyone in the junior national team. "I was a bit worried that I would be criticized. But no one said anything negative," says the headscarf pioneer triumphantly. One reason for this is the extremely open-minded attitude of the "Dansk Boldspil-Union" (DBU) – the Danish football union. It provided Zenab with an exemption allowing her to play on the field with a headscarf.

FIFA, however, sees things differently. According to the world football association, religious symbols such as the chador have no place on the football field. Some may see this as a very dogmatic position. DBU association spokesman Lars Berendt sees the matter from a subtler viewpoint. "A tightly fit headscarf isn't automatically a religious symbol." It has more to do with a cultural commitment.

"Even Ronaldinho runs around the field with a headband on, although it is required that all players on a team wear the same uniform," says Berendt. He sees it as only logical that Zenab should also be allowed to wear a head covering. The key concern is that the DBU is dealing with a talented girl who could help further promote Danish football. "Anyone capable enough should be able to represent their country – regardless of their parents' religion," says Berendt convincingly, as if it were a matter of course. The DBU clearly takes a very relaxed approach to this issue. 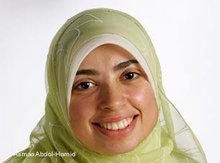 ​​Such an attitude is a little surprising, however, as Denmark is not necessarily one of the most liberal countries when it comes to the headscarf debate that is currently raging all over Europe. Just a few months ago, for instance, the Parliament in Copenhagen banned women judges and court staff from wearing headscarves at work. The fear is that the foundations of Danish culture are being eaten away.

In keeping with this spirit, the populist right-wing Danish People's Party, the DVP, has started an advertising campaign calling for a general ban on the headscarf in Denmark. The Deputy Speaker of Parliament, a DVP member, even threatened to restrict the right of a parliamentarian, UAE-born Asmaa Abdol-Hamid, to speak in the chamber because she wears a headscarf.

As such, Zenab could also prove to be a thorn in the eye of the party. Nonetheless, the 15-year-old up-and-coming athlete remains unperturbed. "For me, the headscarf is not a matter for debate. I am not taking it off. If I am not allowed to wear it while playing for the national team, then I will have to give up playing." This is a remarkably tough posture considering the populism that prevails in Denmark around the issue of the headscarf.

"I actually expected people wouldn't accept my wearing a headscarf," says Zenab. Yet, there have been no attacks in the mass media nor has the DVP conducted a personal campaign against Zenab. Irrespective of attitudes on the headscarf, could it simply be that Denmark now has an extremely promising striker and is placing its hopes on her?

​​Headscarves on women football players in Germany are still not something fans see everyday, but one does encounter such players now and then. They can be spotted with BFC Türkiyemspor and Al Dersimspor – both teams located in Berlin's Kreuzberg district. The latter team is the subject of the documentary film "Football Under Cover."

It relates the story of how the Berlin women's football team challenged the Iranian national team in a friendly match three years ago. Some 4000 women fans followed players dressed in headscarves and tricots under the watchful eye of the state morality guardians. The sight of women footballers in headscarves running for a goal is therefore nothing new.

Zenab didn't reinvent the wheel. But what is new is that a European national team features a player covered with a chador on the field. As such, the slightly built and delicate Zenab El-Khatib can truly be seen as a headscarf pioneer. When there are no surprises, in the near future she will be wearing the uniform of the A league national team. And with a headscarf, of course.

International Ladies' Soccer Team Berlin
"You Can Play Football Wearing a Headscarf If Necessary"
They still encounter rejection and prejudice now and then, but their enthusiasm for sport knows no bounds. Eighteen female soccer players from six different countries train for the Turkish club "Al Dersim Spor". By Ariana Mirza

Jafar Panahi's "Offside"
Protected from the Profanities of the Bellowing Fans
The Iranian film "Offside" is about a group of girl soccer fans who smuggle themselves into Tehran's Azadi Stadium, despite the ban on women spectators. Ariana Mirza presents Offside and its director Jafar Panahi

END_OF_DOCUMENT_TOKEN_TO_BE_REPLACED
Social media
and networks
Subscribe to our
newsletter