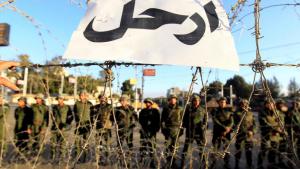 The Arab Spring and its enemies

The end of all hope

Ultimately, the Arab Spring was a failure because the movements fighting for freedom were faced with too many enemies who sought to quash the revolutions and thwart the efforts of the region's peoples to achieve greater democracy. An essay by the Syrian dissident Akram al-Bunni END_OF_DOCUMENT_TOKEN_TO_BE_REPLACED 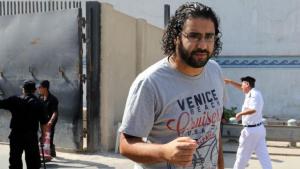 Freedom of expression at an all-time low

The well-known Egyptian blogger Alaa Abdel-Fattah has been released on bail. Is it a sign that the powers that be in Cairo are ready to allow increased freedom of expression? Egyptian filmmaker and activist Omar Hamilton says it's not. Interview by Sella Oneko END_OF_DOCUMENT_TOKEN_TO_BE_REPLACED

Morsi's Islamist regime: Attacks on Egypt's opposition on the riseInterview with the Egyptian human rights activist Gamal Eid: A warning shot for civil societyTV Satirist Bassem Youssef: "People should be able to listen to different opinions" 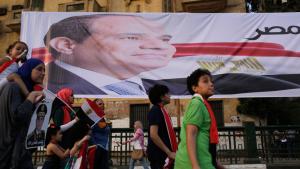 The EU wants it both ways: it would like to retain the moral upper hand as the cradle of democracy, while at the same time maintaining good links with Egypt's new leader, Abdul Fattah al-Sisi. A commentary by Karim El-Gawhary END_OF_DOCUMENT_TOKEN_TO_BE_REPLACED 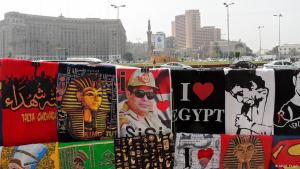 It is a foregone conclusion that Egypt's military ruler Abdul Fattah al-Sisi will win the first presidential election since the ousting of the Islamist President Mohammed Morsi in July 2013. Nevertheless, true democracy in the land on the Nile is still a long way off, writes Loay Mudhoon END_OF_DOCUMENT_TOKEN_TO_BE_REPLACED 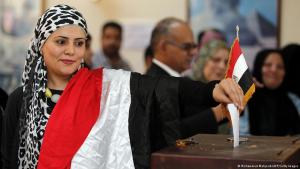 Hardly anyone doubts that Abdul Fattah al-Sisi will sweep to victory in Egypt's presidential election on 26 and 27 May, restoring the old, repressive Egyptian state. In this essay, Atef Botros outlines why he feels that it is questionable whether Sisi will succeed and be able to maintain his grip on power in the long term. END_OF_DOCUMENT_TOKEN_TO_BE_REPLACED 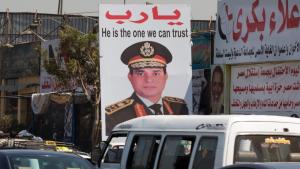 A nation marching in step

Anyone seen filming in Cairo these days should expect to be approached by an upright citizen demanding to see a permit and referring to the omnipresent threat of terrorism. On the eve of the presidential election in Egypt, fighting terrorism and not boosting the country's crippled economy seems to be right at the top of the political agenda. A commentary by Stefan Buchen in Cairo END_OF_DOCUMENT_TOKEN_TO_BE_REPLACED

Presidential election in Egypt: In the heartland of the al-Sisi cultThe economic power of the Egyptian army: Everything under controlPhoto gallery: Egypt's turbulent and tumultuous 2013 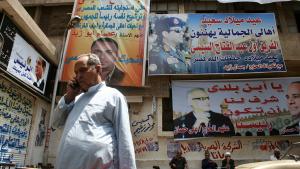 In the heartland of the al-Sisi cult

The residents of Gamaliya in Cairo are extremely proud of their district's son, Abdul Fattah al-Sisi. Markus Symank visited the quarter where the former Egyptian army chief spent his formative years to get a feel for the man who is most likely to be Egypt's next head of state END_OF_DOCUMENT_TOKEN_TO_BE_REPLACED

Interview with the Egyptian author Mansoura Ez-Eldin: "The current situation is untenable"The political mood in Egypt: Between a rock and a hard placeDocumentary film: "Freedom Bus": On the rocky road to democracy 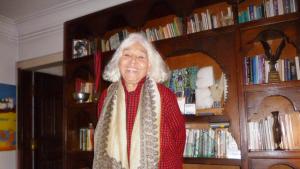 The spirited Egyptian author and feminist Nawal El Saadawi is not afraid of castigating the hypocrisy of the political system and the continued violations of women's rights in her country. Arian Fariborz spoke to her in Cairo END_OF_DOCUMENT_TOKEN_TO_BE_REPLACED

Genital Mutilation in Egypt: Control over Female SexualityPolitical Crisis on the Nile: The Blind Faith of Egyptian Women in the MilitaryA Backlash of Patriarchy in Egypt: Hope for a Proper Revolution 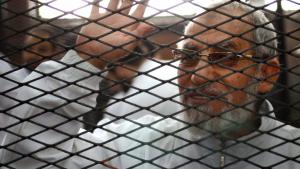 The breakdown of Egypt's legal system

Instead of demonstrating its professionalism and independence and upholding the rule of law, Egypt's judiciary is compromising itself by playing the role of an angel of vengeance, handing down merciless punishments to members of the Muslim Brotherhood in fast-track mass trials. The breakdown of the country's legal system is a disaster that will eventually cost all Egyptians dear, says Karim El-Gawhary in Cairo END_OF_DOCUMENT_TOKEN_TO_BE_REPLACED

New Egyptian Constitution: Democracy Hangs by a ThreadTerrorism and repression in the Arab world: On Islam, anti-terrorism and fascismAttacks on journalists in Egypt: Caught in the crossfire 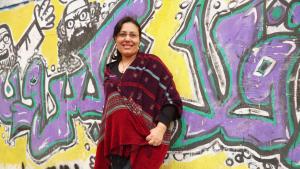 "The current situation is untenable"

For the renowned Egyptian journalist and writer Mansoura Ez-Eldin, the revolution of 2011 provided literary fodder for essays, short stories and now a new novel. Arian Fariborz spoke with her in Cairo END_OF_DOCUMENT_TOKEN_TO_BE_REPLACED 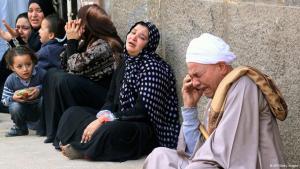 Earlier this week, an Egyptian court sentenced over 500 Muslim Brotherhood supporters to death in a case that lasted less than two days. According to Loay Mudhoon, this ruling is the work of a politicised judiciary and could destroy any chance of national reconciliation END_OF_DOCUMENT_TOKEN_TO_BE_REPLACED 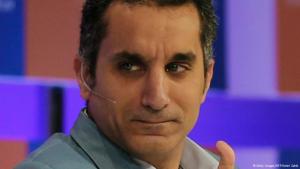 "People should be able to listen to different opinions"

The political satire show "AlBernameg" attracted millions of Arab viewers each week before it was suddenly cancelled in November 2013. On Friday 7 February 2014, it returned to Egyptian TV screens on MBC Egypt. Jaafar Abdul-Karim and Khalid El Kaoutit spoke to its host and star, Bassem Youssef END_OF_DOCUMENT_TOKEN_TO_BE_REPLACED

Portrait of the Egyptian TV Satirist Bassem Youssef: Fighting over the ''Pantie Revolution''Egypt in Turmoil: Against the Tide of HatredInvestigations against a cloth puppet in Egypt: Theatre of the absurd 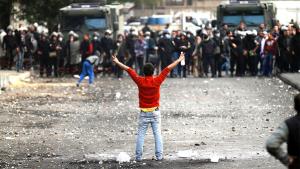 Civil war in Syria, a military regime in Egypt ... at first glance, it seems as if the Arab Spring has gone off the rails. But the battle is not over yet: 2014 will be a decisive year for change in the Arab world. An essay by Karim El-Gawhary END_OF_DOCUMENT_TOKEN_TO_BE_REPLACED

The political mood in Egypt: Between a rock and a hard placeThe Arab Spring in Historical Perspective: Revolutions Take TimeThree years after the Arab uprisings: Tyranny has gone unpunished 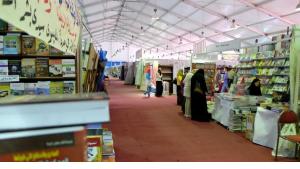 Reader, where art thou?

Many Egyptians are avoiding this year's Cairo International Book Fair for fear of new outbreaks of violence or terrorist attacks. Publishers are complaining about intolerable conditions and a lack of planning. By Amira El Ahl in Cairo END_OF_DOCUMENT_TOKEN_TO_BE_REPLACED

German Bookshop Lehnert & Landrock: The Dangerous Job of Selling Books in Cairo44th Cairo Book Fair: A Breath of Fresh Air for PublishersThe Merit Publishing House in Cairo: A Mecca for Intellectuals, a Centre of the Revolution 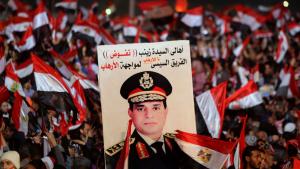 The political mood in Egypt

The poor turnout in the constitutional referendum last week shows that the democratic spirit that fuelled the popular uprising in Egypt in 2011 is now flagging. Writer and journalist Mansoura Ez-Eldin describes the current mood END_OF_DOCUMENT_TOKEN_TO_BE_REPLACED 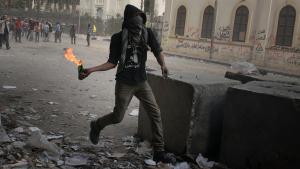 The revolutions that swept across the Arab world in 2011 could have failed for any number of reasons. However, the fact that their consequences now threaten to drag entire nations into chaos and rehabilitate tyrannous rulers three years after they were unceremoniously ousted is almost worse than if there had been no uprisings in the first place. By Günther Orth END_OF_DOCUMENT_TOKEN_TO_BE_REPLACED

The Arab Spring in Historical Perspective: Revolutions Take TimeInterview with the Tunisian Philosopher Mohamed Turki: ''The Arab Spring Could Turn out to Be a Twilight of the Gods''Nine Months After the Upheaval in the Arab World: Is the Revolution Devouring Its Children?

END_OF_DOCUMENT_TOKEN_TO_BE_REPLACED
Social media
and networks
Subscribe to our
newsletter