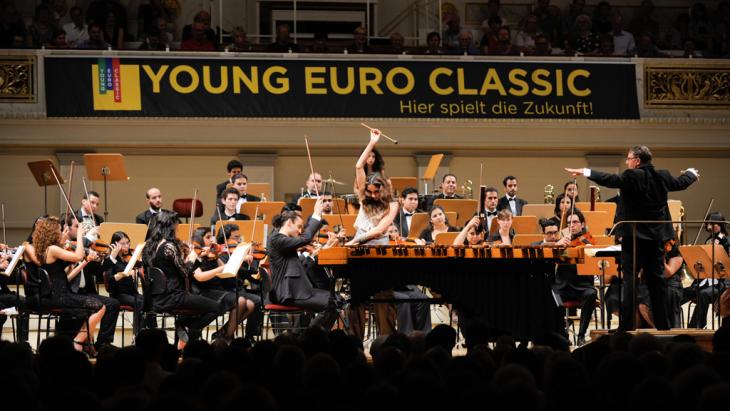 The world's only pan-Arab youth orchestra met in Berlin to make music together. But the young musicians also discussed the situation in their home countries – politics, hopes and fears. Peter Zimmermann reports

Around 60 musicians from seven different Arab nations followed Bremen-based conductor Heiner Buhlmann as he led them through Dvorak's Symphony No. 8. It was the orchestra's first major performance at the Young Euro Classic Festival in Berlin's Konzerthaus at the beginning of August.

With support from Germany's Federal Foreign Office, the Arab Youth Philharmonic Orchestra – made up of musicians from Egypt, Algeria, Bahrain, Lebanon, Syria, Tunisia and the Palestinian territories – met for the first time in Berlin to rehearse for their performance.

Their repertory includes classical European works and traditional pieces from the Arab world. "We play Claude Debussy's 'Dances for Harp' since the harp was originally an Egyptian instrument," said 22-year-old harpist Toaa Salah El-Deen of Cairo. "I'm so proud to be able to perform as a soloist for the first time with an orchestra. The experience is priceless."

A vision of peace

"The Arab Youth Philharmonic Orchestra symbolizes a vision for harmony and peaceful cooperation in the Arab world – something that's become uncertain there," said orchestra founder Fawzy El-Shamy, former director of the Cairo Music Conservatory. "That makes this vision even more important."

"Of course the musicians talk a lot about politics during rehearsal breaks because they all want to live in peace," the conductor noted.

"They talk about the history and background of conflicts in the Arab world and things they've seen on television but don't completely understand. This exchange helps to cultivate peace within our own little group. And then we bring that positive energy to the stage," the optimistic El-Shamy said.

"Really bad news." That's how cellist Somar Ashkar of Damascus described the current situation in his home country. He's perplexed. "Life is becoming incredibly difficult for us. Nothing is like it used to be. But nobody knows what we can do. We just wait. But for whom? Something has to happen…the misery has to be brought to a halt. The fighting and conflicts and everything. We truly want that – peace!"

The cellist travelled with fellow Syrian musicians to Berlin via Lebanon. Once in the German capital, they plunged into music. "We used to always be happy during rehearsals, but that attitude has disappeared due to the war. Still, we're not giving up. Music helps me through it all."

"My friends and I always try to make people happy with music and let them forget what's happening in Syria for a while," he added.

"Around 30 percent of the musicians in our orchestra come from Syria," explained violinist Jasmin Assom de Meledin El-Serafi, of Alexandria, Egypt. "I asked them: 'Who among you supports Bashar al-Assad, and who's against him? And what's happening there?'"

"They explained that many Syrians are in the army and have acted against countless civilians. None of them understand it," the pensive violinist said.

Music should have the power to change not only the lives of the musicians, believes 22-year-old Egyptian concertmaster Kalim Samie Salé, who has been studying in Berlin with violinist Kolja Blacher for the past four years. "There's no right or wrong in music," he said. "Even if we Arabs sometimes want to add a different touch to classical music, we always strike a healthy balance with our conductor Heiner Buhlmann." Salé noted that he and his colleagues often want to play more slowly, but Buhlmann spurs them on.

Music instead of politics

"I don't talk about politics much. People always have different opinions, and everyone thinks he's right," the orchestra leader said. "That makes for bad karma, so I think it's better in times like these to just concentrate on the music."

To that end, the ambitious young musicians presented a work from their own cultural context: Attia Sharara's "Arab Suite" from 1978, a medley of melodies from Egypt, Morocco, Jordan, Libya, Syria and Lebanon. After thunderous applause, the musicians came down from the stage refreshed and rejuvenated.

"We're concerned," said musicologist El-Shamy. "At home, I was always with my students at Tahir Square. When we return, we'll go straight to Tahir."

Concertmaster Salé, for his part, said that being young, he still has hope for the future, but "I think we need more time, much more time."

Any reconciliation between Turkey and Syria’s Assad regime would have disastrous consequences for many Syrians, explains Syria expert Kristin Helberg END_OF_DOCUMENT_TOKEN_TO_BE_REPLACED

There are signs of an imminent normalisation of relations between Turkey and Syria. This would allow Erdogan to score political points domestically before the upcoming elections ... END_OF_DOCUMENT_TOKEN_TO_BE_REPLACED

As Syrian camps housing families of Islamic State fighters get more dangerous, there are calls to bring children out, even if the mothers don't want to go. The idea of separating ... END_OF_DOCUMENT_TOKEN_TO_BE_REPLACED

Where are the measures to deal with the looming challenges facing the Arab world? In this commentary, Marwan Muasher warns that the region is in grave danger of falling behind ... END_OF_DOCUMENT_TOKEN_TO_BE_REPLACED

At the end of every year, the team at Qantara.de gives you a run-down of the ten most-read articles on the site over the past 12 months. Here is a quick overview of the stories ... END_OF_DOCUMENT_TOKEN_TO_BE_REPLACED

Social engagement is often motivated by religious factors. A new book explores the background to these community efforts and appraises how effective they are in helping to ... END_OF_DOCUMENT_TOKEN_TO_BE_REPLACED
Author:
Peter Zimmermann
Date:
Mail:
Send via mail

END_OF_DOCUMENT_TOKEN_TO_BE_REPLACED
Social media
and networks
Subscribe to our
newsletter