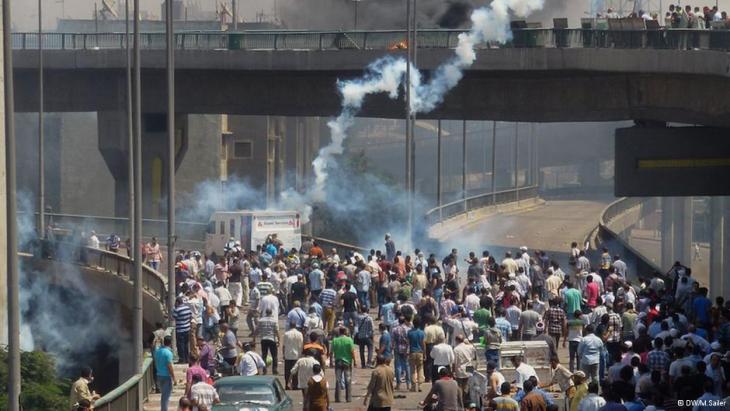 Egypt after the Coup
Bloodshed in Cairo as Military Clamps Down

Dozens of military personnel carriers and light-wheeled tanks blocked access to one of the largest Islamist protest camps in Cairo. It's dangerous here, officers said, and denied access to the area. Journalists were searched and then refused entrance.

A soldier said demonstrators in the camps were setting their tents on fire and shooting each other to blame it on security forces - the remarks is absurd as it's the military and police who attacked the camp.

Just a couple of hundred meters from the camp, thousands of Islamists gathered at one of Egypt's central traffic intersections below a highway. Some hold stones in their hands; many kneel on the ground and pray. They were angry - it showed in their faces.

A group of demonstrators carry a severely wounded man on their shoulders. He was shot in the head. They run towards one of the exits on the highway, desperately trying to make it to safety but moments later the man is dead. 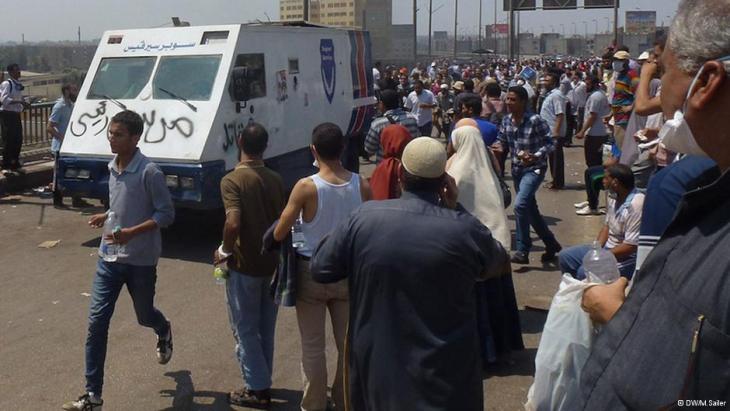 Angry over the day's events, many of the people gathered cry - mourning the dead and praying for the injured. Sobi who has been following the group when they were carrying the severely injured man, explained what happened.

"I was coming from a protest march at the main train station," Sobi said. "We wanted to join another march as well as these demonstrators here under this bridge. Police and hired criminals suddenly started to use tear gas on us. Then they fired live ammunition."

Again and again, the sound of fired tear gas fills the air. Every few minutes, the canisters hit the asphalt. But the number of demonstrators continues to grow. They have occupied three intertwined highways and pick up stones to hit the green railing's metal to scare off police forces. But they are outgunned - their only weapons are stones.

That's why some teenagers have captured an armored money transporter. They kick out empty plastic cash boxes while slowly making their way to the front lines where the van is supposed to provide shelter to demonstrators. They drive through the crowd; people here shout "God is great."

But the vehicle can't protect its passengers from tear gas. The driver is unable to control the transporter and hits the metal railing and knocks over a street light. The driver is lucky and survives - just a couple of centimeters are left, and his vehicle would have fallen off the bridge.

On the other side of the bridge, 20-year-old Ibrahim sits on the floor and doesn't move. One of his friends pours water over his blood-caked hands. His grey T-shirt is covered in blood as well. "I carried a man who was shot in the leg. His foot was torn to pieces by the bullet. I also saw someone who was shot in the head and the arm." 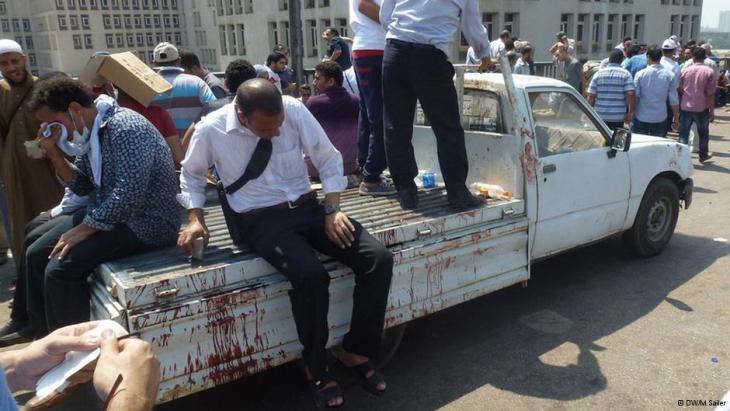 Severely wounded flee the front lines on a transporter. According to Egyptian authorities, 421 people have been killed in the latest clashes, more than 2600 have been injured.

Shortly afterwards, a sequence of gunshots are heard. For the first time, the demonstrators run from the police. They run for their lives as the number of victims rapidly increases. Another captured money transporter is now being used to recover severely injured from the front lines.

But for many, help came too late. A few demonstrators move a man covered in plastic foil from the vehicle onto the street. He has been shot. But cardiac massages and all efforts to stop the bleeding were to no avail. Two young women in full veils cry desperately.

Even many of the men are unable to hold back their tears now. From a distance, 50-year old Ahmed has observed the scene and doesn't keep his anger to himself anymore. "It's so bad what's happening here. It's similar to what Bashar al-Assad is doing in Syria."

Many victims are being rushed to a mosque nearby. The imam calls for doctors for the numerous injured and for cars to transport them. At the end of his call, he shouts: "Respect God and put an end to violence!"

Meanwhile, at the front of the mosque, a procession of cars and money transporters bring newly wounded.

Tourists have been returning to Tunisia, Egypt and Morocco. But, given the global uncertainty caused by the Ukraine war, will the comeback be enough to save a struggling sector, ... END_OF_DOCUMENT_TOKEN_TO_BE_REPLACED

In this essay, renowned Lebanese journalist and writer Hazem Saghieh asks whether the Arab Levant, which stretches from Iraq in the East to Egypt in the West, will remain an ... END_OF_DOCUMENT_TOKEN_TO_BE_REPLACED

By 2050, the Middle East and North Africa could be dealing with many more elderly people suffering from dementia. A lack of facilities, specialists and local knowledge means the ... END_OF_DOCUMENT_TOKEN_TO_BE_REPLACED

With his fist bump greeting for a man he previously called a pariah, US President Biden has paved the way for Saudi Crown Prince Mohammed bin Salman's return to the international ... END_OF_DOCUMENT_TOKEN_TO_BE_REPLACED

Foresight is needed to turn the tide of German policy. Being independent of Russia must not lead to dependence on authoritarian regimes in the Middle East. By Kristin Helberg END_OF_DOCUMENT_TOKEN_TO_BE_REPLACED
Date:
Mail:
Send via mail

END_OF_DOCUMENT_TOKEN_TO_BE_REPLACED
Social media
and networks
Subscribe to our
newsletter