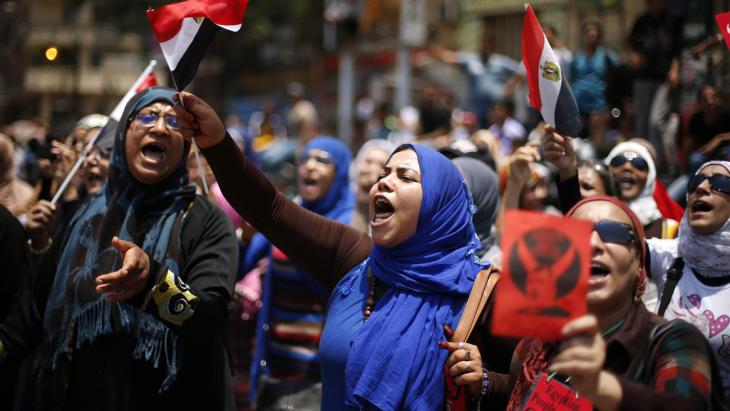 "We Deserve Better Than This"

In today's Egypt, moderate voices are sidelined by the military on the one hand, and the Muslim Brotherhood on the other. But neither the authoritarian state nor the totalitarian Islamists are an option, writes Elham Manea in her essay

In a news show aired by Britain's Channel 4 on 14 August – when state security forces violently cleared the two main sit-ins held by supporters of former president Morsi – a British expert presented the situation as an Egypt torn between two competing forces: the army and the Muslim Brotherhood.

Khalid Abdalla, an Egyptian filmmaker and activist participating in the programme via satellite, retorted that the reality is much more complex: "These are not the only forces on the Egyptian political landscape," he said. His voice should be heard, for it seems that it has been neglected in the frantic discussion thereafter on defining what happened on the 3 July – was it a coup or a revolution?

The filmmaker's voice represents the millions of people that took to the streets on 30 June demanding early presidential elections as well as an end to the Muslim Brotherhood's rule. These millions were not 'angry liberals' trying to oust a democratically elected president. They came from diverse ideological backgrounds; some were even former supporters of the Muslim Brotherhood and many were ordinary Egyptians. But they took to the streets with a clear message: "We are Egyptians first and foremost".

In a way, the Muslim Brotherhood's ascent to power was a kind of a blessing. It exposed its leaders' double talk and the shallow pretence of an 'inclusive modern Islamist party'. 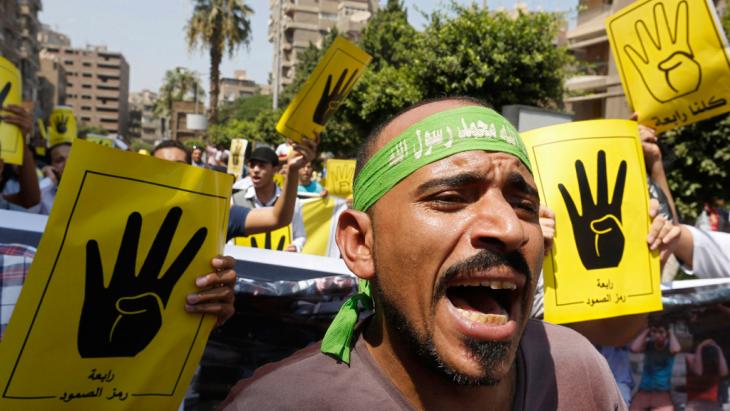 Double talk: Instead of acting in accordance with the principle of inclusiveness, the Muslim Brotherhood grabbed power determined to implement systematic policies of Islamisation and sectarian division, Elham Manea writes

Instead of acting in accordance with the principle of inclusiveness, they grabbed power determined to implement systematic policies of Islamisation and sectarian division. It was as though the Muslim Brothers assumed that winning an election with a very narrow majority gave them carte blanche to change the rules of the political game, and with it Egypt's identity.

Many were afraid that what Khomeini accomplished during his first year in power after the Iranian Revolution of 1979 could be repeated in Egypt. These were real fears, not fictional ones, and the Brotherhood's actions and statements (in Arabic) did not leave much room for doubt. Certainly, an Islamist totalitarian state was not what Egyptians sacrificed their lives for on 25 January 2011.

But neither did they sacrifice their lives for military rule.

However, it was not surprising that the army supported the protesters on 30 June. It was acting to prevent what it perceived as a threat to Egypt's national security, especially in the light of President Morsi's refusal to take action against Islamic militants on the Sinai Peninsula and his call for the army to join the 'jihad' against Bashar al-Assad in Syria. It was also acting to preserve its very existence, as it became known in April and May that Morsi's aides were trying to co-opt Guard officers and senior army officers.

The army is not a democratic or transparent institution, and its image certainly suffered during its transitional rule after Mubarak was chased out of office. Yet many Egyptians still tend to trust its nationalist nature. The surprisingly huge turnout of protesters on 30 June was a timely opportunity for a joint action against the Muslim Brothers. Protesters were asking the army to act as an arbitrator, and this is exactly what it did on 3 July.

How to deal with the Brotherhood?

In view of the violent dispersal of the two sit-ins on 14 August, it is safe to say that in the end, the third position gained the upper hand. 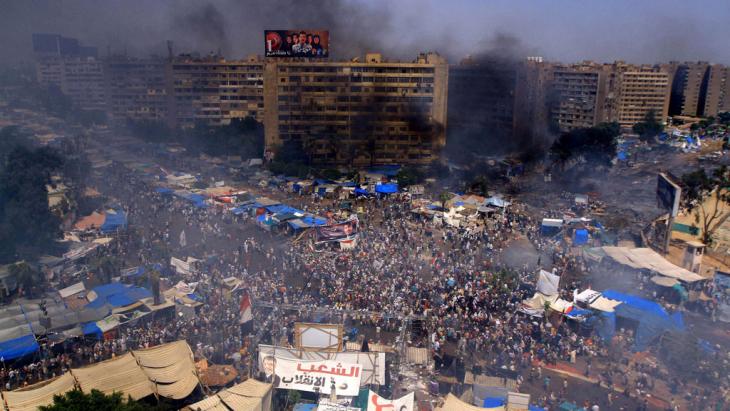 "Exclusion of the Brotherhood from political life": Smoke rises at Rabaa al-Adawya square on 14 August. Hundreds of people were killed when police and army stormed two protest camps in the capital on that day

Although according to a poll conducted by the Egyptian Center for Public Opinion Research, the army's actions enjoyed widespread public support, the question that should be asked now is how did intellectuals and civil society actors perceive these actions? Here we see a varied spectrum of views.

One position, well-articulated by the author Alaa Al Aswany, considers the use of state violence necessary because the state was facing an existential threat and the Muslim Brothers were resorting to violence. They tortured protesters, attacked police forces and torched state institutions, churches and schools. His argument is that any other state would have reacted the way the army did.

On the other side of the spectrum is a position represented by writer and activist Ahdaf Soueif. She is critical of both the army and the Muslim Brothers. She doubts the intention of the army and fears it may be tempted to launch a full grab on power. In the past, she thought only the police state could be the enemy of democratic order.

The non-negotiability of basic human rights

Now, after a year of working with the Muslim Brothers, she also views them as the enemy: "Their ideology, their world view – as it stands – cancels out my existence. They will have it so; they will not make room for anyone else, they will exclude me in every way possible – even if it means killing me," she says. 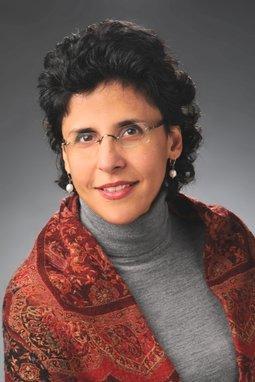 Elham Manea is a Fulbright scholar working as an Associate Professor at the Political Science Institute at the University of Zurich, Switzerland

Yet despite this clear position, she insists on the non-negotiability of basic human rights, that the regard for life and dignity cannot be compartmentalised and that the police should have minimized the use of violence. And she is right. We cannot afford human rights to one group and dispense with these for another.

Khalid Abdalla's voice is very similar to Soueif's: He is also disgusted by the bloodshed and resists falling prey to a polarised narrative. He did not believe the sit-in should have been cleared with the use of force and violence, but at the same time he was against what the sit-in stands for, i.e. the banners and songs that were calling for an Islamist state.

It is interesting that the binary outlined by the British expert on the aforementioned television programme has been a standard argument used by Mubarak's regime and all Arab authoritarian regimes - namely: "It is either us or the Islamists". The future of the region should not be held hostage to this blackmail strategy. Neither the authoritarian state nor the totalitarian Islamists are an option. We deserve better than this. Many Egyptians said that on 30 June. Just as they surprised us then, they might surprise us again.

Elham Manea (born 1966 in Egpyt) is a political scientist, author and journalist. She also works as a consultant for Swiss government agencies and international and human rights organizations. Her research interests include gender and politics in Arab states, democratization and civil society in the Middle East, and politics of the Arabian Peninsula. Her most recent publication is "The Arab State and Women's Rights: The Trap of Authoritarian Governance" (London: Routledge Studies on Middle Eastern Politics, June 2011).

Home
Print
Newsletter
More on this topic
Interview with Ahmed Maher: "The Next Revolution Will Certainly Come"After the Coup in Egypt: A Dark Chapter in Egyptian LiberalismPersecution of the Muslim Brotherhood in Egypt: Humiliated even in DeathQantara Dossier: Power Struggle in Egypt
Related Topics
Arab Spring, Egypt Revolution 2011, Egypt's army, Power struggle in Egypt
All Topics

While some are beginning to protest the lockdown, others are unable to bury their loved ones in accordance with Islam. Here’s the latest from across the region END_OF_DOCUMENT_TOKEN_TO_BE_REPLACED

Healthcare systems in Tunisia and Egypt are in a catastrophic state. The governmental response to the crisis in both nations could not be more different. Sofian Philip Naceur ... END_OF_DOCUMENT_TOKEN_TO_BE_REPLACED

Coronavirus continues unabated. Iran remains a hub of infection, war-torn Syria has recorded its first case and Yemen is bracing itself for the worst. Here’s the latest from ... END_OF_DOCUMENT_TOKEN_TO_BE_REPLACED

Libyan political analyst Faraj Alasha argues that the Berlin conference on the Libyan war did nothing to change the fact that there is no political solution to end the war raging ... END_OF_DOCUMENT_TOKEN_TO_BE_REPLACED

As COVID-19 sweeps across the globe, it is forcing religions to adapt and take action to prevent infection. But experts warn against using the crisis to fuel conspiracy theories. ... END_OF_DOCUMENT_TOKEN_TO_BE_REPLACED

With borders closing and the opportunities for international travel shrinking by the hour, we take a look at coronavirus developments across the Middle East and the wider Muslim ... END_OF_DOCUMENT_TOKEN_TO_BE_REPLACED
Author:
Elham Manea
Date:
Mail:
Send via mail

END_OF_DOCUMENT_TOKEN_TO_BE_REPLACED
Social media
and networks
Subscribe to our
newsletter