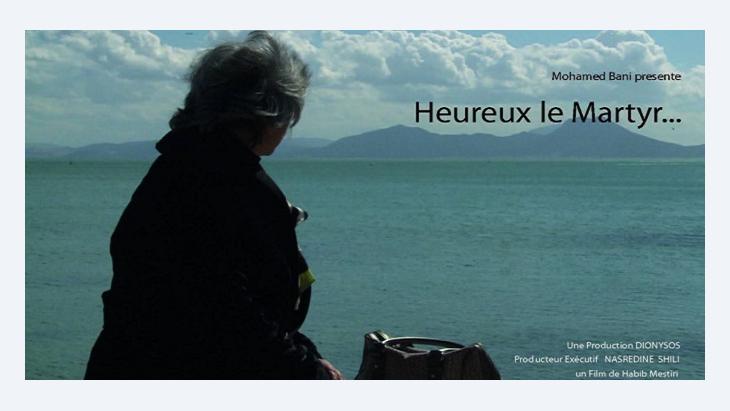 The shouts of protest filling the Coulissé cinema in the heart of Tunis are deafening. Outside, there is a huge police presence. The atmosphere is emotionally charged. Two thousand people stand up and start singing the national anthem. Up on stage in front of the screen, Tunisian flags are being waved.

It is 23 September and the opening night of the "Human Screen" film festival (International Human Rights Film Festival) in Tunis. This cultural event has attracted the city's artists and activists, who are venting their anger about the arrest of young artists the night before. They are protesting against the predominantly Islamist government coalition, which is allowing a growing number of critical artists to be put behind bars. Many members of the opposition feel that the Islamists were partly responsible for the politically motivated assassination of two left-wing opposition politicians, Chokri Belaid and Mohamed Brahmi, in February and July 2013 respectively.

The main feature of the evening is a film by the experienced Tunisian director Habib Mestiri. It is a portrait of one of the two assassinated men, Chokri Belaid, martyr of the nation, who was shot dead outside his house in Tunis on 6 February 2013.

Progress in the murder investigation is sluggish. The Belaid family has hinted that it considers it very likely that the transition government had a hand in the murder. In the light of this politically charged atmosphere, Mestiri's biographical film Heureux le Martyr (Happy the Martyr) seems a little tame. The groups of Tunisian activists in the cinema expected something more militant.

Habib Mestiri didn't want to make a specifically political film about Belaid. Heureux le Martyr is made in the style of a biographical television film. Mestiri tells his story at a small number of selected locations using long shots. The filmmaker lets Belaid's family, childhood friends, fellow opposition politicians and even political opponents have their say.

The wealth of statements is supposed to show that Belaid's approach to politics was rooted in a deeply humanistic outlook. We see Chokri the father, painting with his children, looking after them, feeding them when they were infants. Photo and film archive material takes the viewer back to Belaid's childhood. We see Chokri at school, Chokri with friends, Chokri at university in Paris – where he studied law and met his wife Besma – Chokri on his wedding day.

Mestiri's film is an attempt to preserve an outstanding political figure for posterity, not only for those who knew him, but also for those who didn't. Many of those who worked with him speak of Belaid with great seriousness, but also with a smile. Artists he knew also appear in the film. The recollections of his wife, Besma, and his brother Abdelmajid are like a leitmotif running through the film.

Habib Mestiri finished the film within six months of Belaid's murder, which makes it relevant as a document of contemporary history. The immediacy of the statements made in the film are tangible. Then there is the public shock and rage; the private mourning; the funeral, which over one million people (almost one-tenth of the entire Tunisian population) transformed into a demonstration for a democratic Tunisia.

But Mestiri took a risk by adopting this approach; the relevance of a political leader often only becomes evident from a distance. But the director chooses to avoid the issue entirely. The film's weakness is that as the author, Mestiri is virtually absent from the film. He more or less restricts himself to the compilation of biographical information and to the accounts of contemporary witnesses.

Nor is the film very convincing at a dramaturgical level; it is too protracted for that. This has not gone unnoticed by the director himself. According to Mestiri, the version shown at the festival, which was over 90 minutes long, will be cut a few times before the final version stands.

An activist with a camera

Youssef Ben Ammar comes to the meeting in the Grand Café du Théatre in Tunis with an iPad tucked under his arm. The young filmmaker gives a preview of his documentary Au Temps de la Révolte (In a time of revolt). The half-hour film was made for a competition on the subject of "reconciliation" run by the Goethe Institute and the Institut Français Tunis. On 4 October, it was named one of the two winning entries. 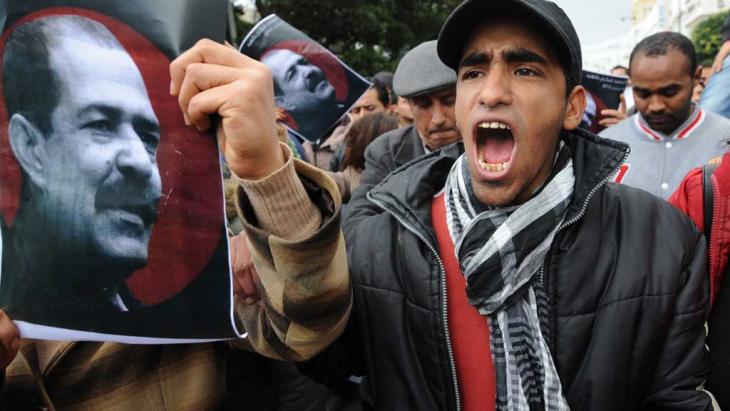 Protests after the assassination of Chokri Belaid in Tunis (photo: AFP/Getty Images)

The film tells the story of the Tunisian revolution in three parts. With the two political murders – that of Chokri Belaid and Mohamed Brahmi – Youssef Ben Ammar has selected two pivotal moments in Tunisia's recent political history. He makes the daughters of the two politicians the main protagonists of his film and blends scenes with them with scenes of people who spontaneously took to the streets on the day of the murders.

Ben Ammar filmed the footage himself with a hand-held camera. On both days (6 February and 25 July), he was out and about in Tunis, filming virtually non stop. The filmmaker Ben Ammar is himself part of this episode of contemporary history and adopts a unequivocal stance against these political murders. He is an activist with a camera.

The greyness of post-revolutionary everyday life

He juxtaposes these political events with footage of day-to-day life after the revolution: the empty trams in the evening that used to be full to bursting point; unemployed youths in cafés, children setting off with their donkeys to get drinking water. Ben Ammar uses pictures to tell stories, deftly using them to steer a course between tension and release.

In the first two parts, very little is said, and the scenes change rapidly. Chokri Belaid's two daughters are still of a school-going age. Youssef Ben Ammar shows them in their bedrooms, snuggled up among cuddly toys, watching videos of the demonstrations of support for their father on the computer.

Mohamed Brahmi's daughters are older. When they appear on screen, Ben Ammar changes the way he tells the story; it becomes more intimate, more static. Tears coursing down her cheeks, the 18-year-old daughter tells how she and her brother tried to drag their father from the car after he had been shot. Reconciliation? No. For her there can be no reconciliation.

This half-hour film draws viewers into the action, really involving them in what is happening. We are at the eye of Tunisia's political storm; we cannot help but be moved by what the future holds for these children. How will the assassination of their fathers shape the rest of their lives?

Au Temps de la Révolte doesn't provide any answers. Nevertheless, it does show what people in this country are doing to each other. They are fighting tooth and nail in a completely ruthless manner for political power, a situation that does almost nothing to improve the lives of most people. On the contrary. Fear has returned to Tunisia. There is no sign of reconciliation.

Youssef Ben Ammar is still a film student. Although this is only his second short documentary film, it is already a mature production. He cleverly links the different narrative levels and has a talent for dramaturgically exciting developments. His future films in the socio-political field will be ones to watch. For the moment, however, thanks to the competition he has won, Au Temps de la Révolte will also be screened in Europe.

Research project "The Global Qur'an", brainchild of Professor of Islamic Studies Johanna Pink and sponsored by the European Research Council, analyses the history and ... END_OF_DOCUMENT_TOKEN_TO_BE_REPLACED

Arab youth express their hopes and wishes for the New Year, spanning everything from civil and political rights, to education, to arts and culture. By Rafiah Al Talei END_OF_DOCUMENT_TOKEN_TO_BE_REPLACED

Her grandparents are Jews – born in Tunisia and Algeria. Director Cleo Cohen has now broken the silence about this with a very personal debut. By Nadine Wojcik END_OF_DOCUMENT_TOKEN_TO_BE_REPLACED

Moncef Marzouki was Tunisia's first democratically elected president after the fall of dictator Ben Ali. Today he is the most prominent critic of increasingly counter- ... END_OF_DOCUMENT_TOKEN_TO_BE_REPLACED

Asef Bayat, professor of Sociology at the University of Illinois, Urbana-Champaign, has been studying revolutions and how they affect people since 1979. In his recent book, " ... END_OF_DOCUMENT_TOKEN_TO_BE_REPLACED

Every year in December, the team at Qantara.de takes a look back at the articles that proved most popular with our readers. This year is no different. Here is a run-down of the ... END_OF_DOCUMENT_TOKEN_TO_BE_REPLACED
Author:
Christina Omlin
Date:
Mail:
Send via mail

END_OF_DOCUMENT_TOKEN_TO_BE_REPLACED
Social media
and networks
Subscribe to our
newsletter