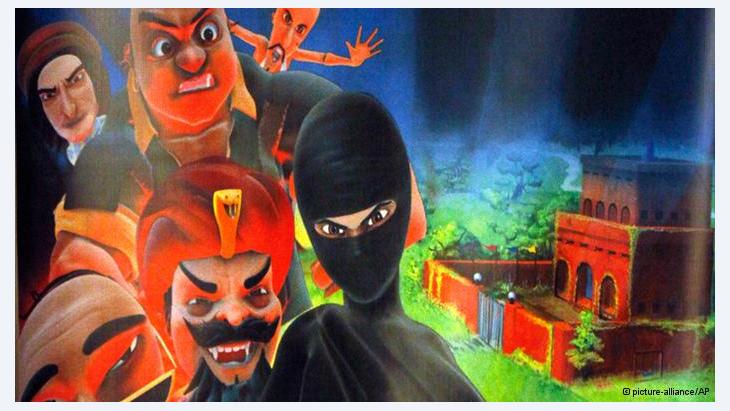 A burqa-wearing superhero? The first episode of Haroon Rashid's animated "Burka Avenger" has been shown in Pakistan. The creator of the series says he wanted to create a role model for girls in his country. Rachel Baig reports

She is completely covered. Only her eyes and fingers can be seen. The rest of her body is hidden behind a black burqa. Jiya, as the heroine is called, only wears her burka during fighting scenes, using her superpowers to fight evil in Pakistan. She doesn't use weapons, but books and pencils instead.

"It's like the phrase 'the pen is mightier than the sword,'" explains Haroon Rashid, maker of the cartoon series. "We want to show that education can eliminate many problems."

The TV series is comprised of 13 episodes, each of which is 22 minutes long. They focus on the story of the heroine, who is a teacher by day, and also on three young school children from the imaginary city of Hawalpur.

Not a symbol of oppression

The decision to have the main character of the cartoon wear a piece of clothing common among conservative Muslim women in Pakistan and Afghanistan has not been well received. Some people see the outfit as a symbol of oppression against women.

"In the West, the burqa is seen as having a very strong symbolic value. So people are taken aback by it at first," said Sabine Schiffer who works at the Media Responsibility Institute in Erlangen, Germany. "But the heroine in this story does not fit with all the clichés. She shows a great amount of strength while fighting injustice."

In the animated series, the burqa looks more like a ninja outfit than traditional one. "She only wears it to conceal her identity. Just like other superheroes," explains Rashid. Aside from that, he said, it gives the cartoon a touch of local spice.

Rashid said he didn't want his main character to wear a suit like Catwoman or Wonder Woman because these racy, figure-fitting outfits objectified and sexualized women.

Moral of the story

The topics of the show vary. Sometimes they are about environmental protection, other times about minority rights. It is critical about Pakistani society but packed into an entertaining show for kids. There are no brutal fighting scenes – it is more dialogue-based. In one episode, for example, a magician builds a robot, which is supposed to take over the world. For this, the magician has to send the robot around the world. But his plan fails when his visa application for the EU is rejected. 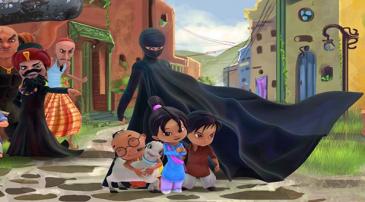 Halal heroism: Wonder Woman and Supergirl now have a Pakistani counterpart in the pantheon of female superheroes - one who shows a lot less skin

In the first episode, a school in a village is to be closed. But the Burka Avenger is able to prevent this from happening. This is a conflict which Pakistanis are all too familiar with. The Taliban have destroyed hundreds of schools in the past because they reject education for women and girls.

The show reminds one of the Pakistani girl Malala Yousafzai, who in October, 2012, was nearly killed in a shooting carried out by extremists while on her way to school. Malala has spoken out publicly against the Taliban and criticized their values. She has also become active in promoting education for girls. She was also a nominee for this year's Nobel Peace Prize.

The series is predominantly targeted at children in Pakistan. It is currently being broadcast on a popular Pakistani TV channel in Urdu language. There is also a Pashto version in the making for Pakistanis in the northwest of the country and also for Pashto-speaking Afghans.

There is also a smartphone app available because "that's where it all started," Rashid explains. Three years ago, he and a few IT experts created an interactive app about a female burka-wearing fighter. For advertising, he had someone create an animation he liked so much that he decided to create a whole TV series based on that animation.

Haroon Rashid financed the project largely on his own. He also used his musical background in the production. As a former member of a popular Pakistani boy band, he had the knowhow to create songs for the series – each episode features songs written and sung by him along with other Pakistani rock stars.

For Rashid, the number-one objective of the show is to get people to smile and to convey the messages that people are equal and that education improves the quality of life.

However, media expert Sabine Schiffer said a lot would have to change still for this message to become reality in Pakistan. "The show's idea that you can reach anything through education is not quite correct." Other factors, such as the caste system, often play a large role in determining one's future, she added – even today.

Since returning to power in Afghanistan, the Taliban have steadily eroded the rights and opportunities of women and girls, particularly their access to education. But Afghans are ... END_OF_DOCUMENT_TOKEN_TO_BE_REPLACED

German imams have publicly expressed their solidarity with the women of Afghanistan. In a letter of protest, the clerics say that the Taliban regime's decree barring women from ... END_OF_DOCUMENT_TOKEN_TO_BE_REPLACED

At the end of every year, the team at Qantara.de gives you a run-down of the ten most-read articles on the site over the past 12 months. Here is a quick overview of the stories ... END_OF_DOCUMENT_TOKEN_TO_BE_REPLACED

The "Weiter Schreiben" (Keep Writing) project promotes literature from war-torn and crisis-stricken regions and has, most recently, shone its spotlight on Afghanistan. Afghan ... END_OF_DOCUMENT_TOKEN_TO_BE_REPLACED

The Islamic Republic has been unable to quell the civil unrest that erupted three months ago, after Mahsa Amini died after being detained for violating hijab rules. Now the ... END_OF_DOCUMENT_TOKEN_TO_BE_REPLACED

Education for girls and women is still possible in Afghanistan, says Reinhard Eroes of the Kinderhilfe Afghanistan initiative. In interview with Elisa Rheinheimer, he talks about ... END_OF_DOCUMENT_TOKEN_TO_BE_REPLACED
Author:
Rachel Baig
Date:
Mail:
Send via mail

END_OF_DOCUMENT_TOKEN_TO_BE_REPLACED
Social media
and networks
Subscribe to our
newsletter