Saturday's historically low election turnout was a reflection of Algerians' ongoing frustration with the political status quo. Faced with mounting state repression, however, the likelihood of the Hirak evolving from popular protest movement into a significant opposition force appears slim. By Ilhem Rachidi END_OF_DOCUMENT_TOKEN_TO_BE_REPLACED

Interview with human rights activist Rabah Arkam: Algeria's protesters continue their "Revolution of Smiles"Algeria: how the Hirak fared in 2020: Protestors still calling for genuine democracyDemocracy in the Maghreb: Tebboune's 'New Algeria' looks a lot like the old Algeria

Since February 2019, millions of Algerians have been demonstrating against the government. They first took to the streets to demand more democracy and protest the renewed candidacy of former authoritarian president Abdelaziz Bouteflika. END_OF_DOCUMENT_TOKEN_TO_BE_REPLACED

The Algerian state's insufficient response to a recent spate of femicides has driven hundreds of women to defy coronavirus lockdown restrictions to take part in street protests, while also rekindling a debate about the death penalty. By Dalia Ghanem END_OF_DOCUMENT_TOKEN_TO_BE_REPLACED

Violence against women: Femicide on the rise in TurkeyInterview with Moroccan Islamic feminist Asma Lamrabet: Emancipation through a new reading of the KoranCivil society held hostage by corruption and murder: Libya's peace process doomed to failure without its womenPatriarchy and governance: Iraq's token females

Algeria has not found peace since Abdelaziz Bouteflika, who was president for 20 years, resigned under massive public pressure in April 2019. On 1 November 2020, the government held a constitutional referendum to end the political crisis. But things did not work out as it planned. On the contrary, the rifts between the regime and the pro-democracy movement have deepened further. The opposition now wants to use the momentum from the latest wave of protests to better organise itself. By Sofian Philip Naceur END_OF_DOCUMENT_TOKEN_TO_BE_REPLACED

Democracy in the Maghreb: Tebboune's "New Algeria" looks a lot like the old AlgeriaCOVID-19 consequences: Coronavirus halts year-long protests in AlgeriaFirst anniversary of the Hirak movement: The jury's still out on Algeria

Algeria's recent referendum was a thinly veiled attempt to hijack the agenda of the country's popular Hirak protest movement. Yet the people are no longer willing to accept ageing leaders who rely on a veneer of democracy to maintain their rule. Legitimacy will only be achieved by genuine structural reforms. By Dalia Ghanem END_OF_DOCUMENT_TOKEN_TO_BE_REPLACED

Exploiting the coronavirus emergency, Algeria’s ruling classes have ramped up their repressive campaign against the protest movement, opposition and free media. By Sofian Philip Naceur END_OF_DOCUMENT_TOKEN_TO_BE_REPLACED

First anniversary of the Hirak movement: The jury's still out on AlgeriaArab Spring 2.0: The Middle East's fearless protestersUnpopular presidential elections: Algeria stands at a historic crossroads

Focussing on the Algerian protest movement, "Nardjes A." by Karim Ainouz, is about the universal power of hope to change the social and political status quo in the Maghreb country. By Rene Wildangel END_OF_DOCUMENT_TOKEN_TO_BE_REPLACED

Few would have thought that Algeria's Hirak protest movement would still be mobilising the masses 12 months on from its first peaceful demonstration. According to Isabelle Werenfels and Luca Miehe, the systemic change people hoped for post-Bouteflika has yet to materialise. External players need to brace themselves for ongoing political turbulence END_OF_DOCUMENT_TOKEN_TO_BE_REPLACED

The upheavals of the past year in the MENA region are arguably as momentous as those of the Arab Spring in 2011. Yet perhaps the biggest difference is that our interest seems to have evaporated. Why? Essay by Jannis Hagmann END_OF_DOCUMENT_TOKEN_TO_BE_REPLACED

Algeria's political impasse has been going on for weeks. Attempts to calm the public mood by sacrificing some of the Bouteflika faithful has only served to fuel demonstrators' demands that all such remnants of the old guard be rooted out. Whether there is an election or not, the crisis seems set to continue, writes political analyst Ali Anouzla END_OF_DOCUMENT_TOKEN_TO_BE_REPLACED

Military dictatorships in the Middle East: The real enemies of the Arab SpringInterview with Algerian opposition leader Soufiane Djilali: Political crisis in Algeria – is compromise in sight?Revenge is not the answer! Prosecuting tyranny in the Arab world

The Arab world is one gigantic pressure cooker. For the most part the lid of repression is on, but it is boiling over with increasing frequency. Whether in Lebanon, Iraq or in Algeria, where people are rising up against political despotism and corruption. By Karim El-Gawhary END_OF_DOCUMENT_TOKEN_TO_BE_REPLACED 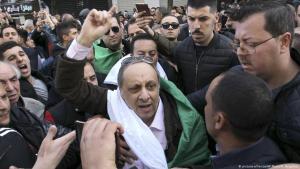 Presidential elections or constitutional assembly? Algeria's opposition continues to argue over ways to overcome the crisis. A proposal by the Jil Jadid party could finally break down the entrenched fronts. Sofian Naceur spoke to its leader, Soufiane Djilali END_OF_DOCUMENT_TOKEN_TO_BE_REPLACED

Democracy movements in the Arab world: Look to Sudan, Algeria!Algeria after the postponed elections: The closing window for changeCivil society and democratic transition in Algeria: Algerian activists demand a place at the table 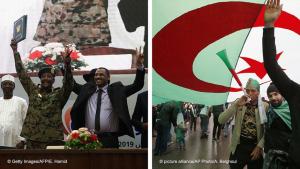 A watershed moment in Sudan: after 30 years of repression, a civilian-led government looks set to co-determine the country’s future path. It's quite a different picture in Algeria: here, the people have been demonstrating against the military for months, to no avail. By Khaled Salameh END_OF_DOCUMENT_TOKEN_TO_BE_REPLACED

Algeria in transition: Time's up, Bouteflika!Civil society and democratic transition in Algeria: Algerian activists demand a place at the tableSudanese opposition and military council in agreement: Sudanʹs first steps towards democracy? 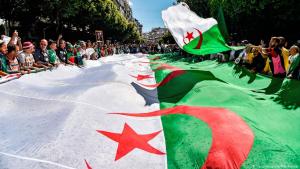 For more than four months now, protesters in Algeria have been urging a clean-up of the country's politics and a new constitution. But how realistic is change given the military's iron grip on power? By Dalia Ghanem END_OF_DOCUMENT_TOKEN_TO_BE_REPLACED 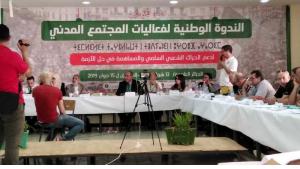 Algerian activists demand a place at the table

On 15 June, Algiers hosted a National Conference of Civil Society with the aim of producing a roadmap on how to shape the countryʹs – hopefully – democratic future. Yet at a time when civil society is just beginning to re-awaken, some wonder whether it will really be able to influence the possible transition that is looming. By Nourredine Bessadi END_OF_DOCUMENT_TOKEN_TO_BE_REPLACED

Popular uprisings in the Islamic world: Algiers, Khartoum… that trembling momentGovernment by consensus post-Bouteflika? Algerians riding a cyberspace waveMilitary dictatorships in the Middle East: The real enemies of the Arab Spring

For people in the Arab world to be able to throw off the yoke of military rule, a new balance must be struck between political and social forces and the military. Though it is now years since the Arab Spring, this goal still seems a long way off. By Ali Anouzla END_OF_DOCUMENT_TOKEN_TO_BE_REPLACED

END_OF_DOCUMENT_TOKEN_TO_BE_REPLACED
Social media
and networks
Subscribe to our
newsletter