United Arab Emirates strongman Sheikh Mohammed bin Zayed al-Nahyan, who was formally elected president on 14 May, has led a realignment of the Middle East, creating a new anti-Iran axis with Israel while fighting a rising tide of political Islam in the region END_OF_DOCUMENT_TOKEN_TO_BE_REPLACED

UAE foreign policy and the Crown Prince of Abu Dhabi: Hardly a ruler in waitingSudan's coup puppetmasters: The UAE – pulling Sudanese stringsSaudi Arabian and UAE foreign policy: A finger in every pie 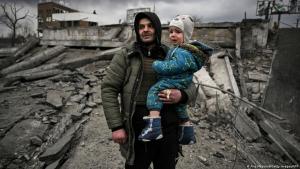 The Syrian Archive: Netting the war criminalsSyrian civil war: The end of a dreamSyrians and the Ukraine war: "We share a similar suffering" 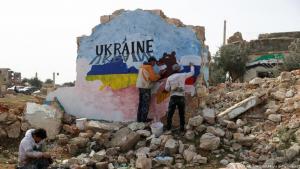 Syrians and the Ukraine war

Syrian opposition activists say they know what it's like to go up against the Russian military. Some experts think things may have turned out differently in Ukraine if the West had stood up to the Kremlin over Syria. By Diana Hodali END_OF_DOCUMENT_TOKEN_TO_BE_REPLACED

Russia's interventions in Ukraine and Syria: What drives Putin is evident from SyriaInterview with Stefan Meister: "The Syria crisis is legitimising Putin"Russia's invasion of Ukraine: What impact on the Arab world?Russia, Israel and the Syrian conflict: Curbing Iran's influence

The notorious U.S. prison camp is 20 years old. Over the years, several plans to close it have been rejected. For the detainees, little has changed in the last two decades. Oliver Sallet reports from Guantanamo Bay END_OF_DOCUMENT_TOKEN_TO_BE_REPLACED

Interview with Mohamedou Ould Slahi: "The rule of law means nothing to a corrupt regime"Mohamedou Ould Slahi's "Guantanamo diary": Diary entries from the darknessObama's Guantanamo policy: A maze of contradictionsPoems from Guantanamo: "Will Ya Ever Go Jihad Again?"Murat Kurnaz, the "Bremen Taliban": Inside Guantanamo

It is getting hotter and hotter in Iraq. Fifty degrees or more is no longer a rarity. The state between the Euphrates and Tigris rivers is now one of the hottest countries on earth. Muwafaq Mubareka from Baghdad is determined to fight global warming. Birgit Svensson paid the climate hero a visit END_OF_DOCUMENT_TOKEN_TO_BE_REPLACED

The "War on Terror" has not only failed in Afghanistan, it has exacerbated insecurity and generated more terrorism. This is the main thrust of journalist Emran Feroz in his book, which was published, appropriately enough, 20 years after the attacks of 11 September 2001 and the subsequent invasion of Afghanistan by the USA and NATO. Behnam Said read the book for Qantara.de END_OF_DOCUMENT_TOKEN_TO_BE_REPLACED

The West's failure in Afghanistan: Authors of 'War on Terror' in denial to the bitter endWar crimes on the Hindu Kush? Death by drone – the United States' vicious Afghan legacyDrone war in Afghanistan and Pakistan: Living in the shadow of the "angels of death"Hisham A. Hellyer on "the War on Terror": "You cannot rely on the West"

Western states have fought against terrorism not only in Afghanistan, but also in Syria and Iraq – leaving behind people who were once their partners in fear and poverty. Hisham A. Hellyer talks in interview about the "war on terror" and the role played by the West 20 years on. Interview by Andrea Backhaus END_OF_DOCUMENT_TOKEN_TO_BE_REPLACED

9/11 twenty years on: How the 'War on Terror' destabilised the Middle East20 years after 9/11: U.S. war on terror is still omnipresentWestern withdrawal from Afghanistan: The symbolic importance of the U.S. defeat

Two decades after the attacks of 11 September 2001, the West faces the shattered debris of its failure – not only in Afghanistan, but also in Iraq, Syria, Libya and Yemen. What went wrong in the war on terror? And what lessons can Europe learn from it? Essay by Kristin Helberg END_OF_DOCUMENT_TOKEN_TO_BE_REPLACED

The legacy of 9/11: Why the world needs to re-think its war on terrorSurveillance and domestic security since 9/11: Like donkeys carrying books9/11 and the Arab Spring: The end of the ''antithesis''The Iraq War fifteen years on: "America destroyed my country"

Twenty years after 9/11, the United States is recalibrating its war policy. However, its assertions that the era of endless wars is over are a myth, writes Maha Hilal END_OF_DOCUMENT_TOKEN_TO_BE_REPLACED

Qantara dossier: 11 September 2001Western withdrawal from Afghanistan: The symbolic importance of the U.S. defeat9/11 twenty years on: How the 'War on Terror' destabilised the Middle EastOlivier Roy: "The politics of chaos": No geostrategy of Islam

Caught up in discussions on the future of local Afghan forces and new Islamist threats, people are failing to grasp the historic scale of the debacle, argues Stefan Buchen in his essay END_OF_DOCUMENT_TOKEN_TO_BE_REPLACED

The West's failure in Afghanistan: Authors of 'War on Terror' in denial to the bitter endWar crimes on the Hindu Kush? Death by drone – the United States' vicious Afghan legacyInterview with Afghanistan expert Ahmed Rashid: "The Americans were completely devoid of any strategy"The legacy of 9/11: Why the world needs to re-think its war on terrorAfghanistan as the Western troop withdrawal nears: The failure of dialogue

Although the United States clearly could have done a better job of managing its departure from Afghanistan, the tragedy playing out this month has been 20 years in the making. From the outset, America and its allies embraced – and never reconsidered – a top-down state-building strategy that was always destined to fail. Commentary by Daron Acemoglu END_OF_DOCUMENT_TOKEN_TO_BE_REPLACED

The West's failure in Afghanistan: Authors of 'War on Terror' in denial to the bitter endTaliban in the ascendant: Joe Biden and America’s withdrawal of choiceMilitary force and drone warfare: Post-truth victimsU.S. foreign policy in Afghanistan and the Middle East: Obama's strategic malady 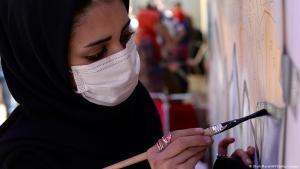 Particularly threatened by the Taliban, some artists are trying to destroy all proof of their work. Others are creating last pieces as a form of resistance. Manasi Gopalakrishnan reports END_OF_DOCUMENT_TOKEN_TO_BE_REPLACED

How could the Afghan government and its institutions collapse so quickly? That things were going wrong in Afghanistan had been obvious for a long time, yet the West preferred to look the other way, writes Emran Feroz END_OF_DOCUMENT_TOKEN_TO_BE_REPLACED

Afghanistan in the hand of the Islamists: Taliban rule the second time round – what to expect?Taliban in the ascendant: Joe Biden and America’s withdrawal of choiceMilitary force and drone warfare: Post-truth victimsDrone war in Afghanistan and Pakistan: Living in the shadow of the "angels of death"

While agreeing last week to a withdrawal of US combat troops from Iraq, neither Iraqi nor US leaders can admit publicly how much they need each other. By Cathrin Schaer END_OF_DOCUMENT_TOKEN_TO_BE_REPLACED

Joe Biden promised to make democracy and human rights central to US foreign policy. But that means not insisting on Israel's right to defend itself without mentioning its expansion of settlements in occupied Palestinian territory, its policy of discrimination, and its denial of the Palestinians' right to an independent state. By Mohamed ElBaradei END_OF_DOCUMENT_TOKEN_TO_BE_REPLACED

Promoting human rights in the Middle East: The US and Arab hearts and minds – an impossible task?Israeli-Palestinian dialogue: Israel, Palestine – and nuance as the moral imperativeHagit Ofran of Peace Now: The Zionist still holding a candle for peace and equalityEscalation in the Middle East: Flare-up between Israel and Hamas paints a bleak picture

END_OF_DOCUMENT_TOKEN_TO_BE_REPLACED
Social media
and networks
Subscribe to our
newsletter