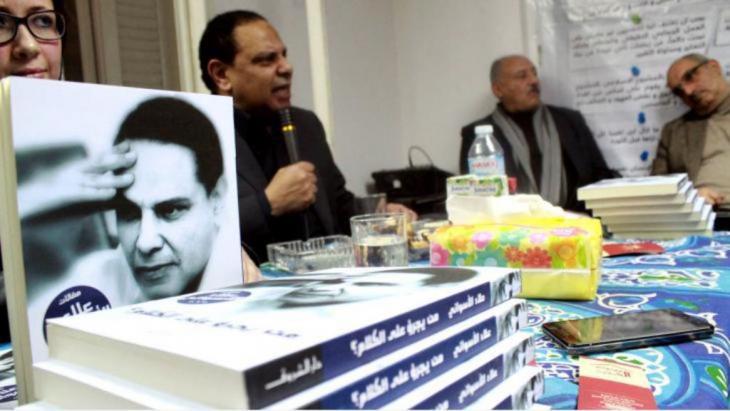 Ten years ago, Egyptians dreamt of change, they took to the streets against President Mubarak. But their hopes were dashed. A look back and forward with writer Alaa Al Aswany

Hope, rebellion, hypocrisy and oppression – The great novel about the Egyptian revolution on the 10th anniversary of the Arab Spring.

Alaa Al Aswany's new novel is the first comprehensive literary account of the 2011 Egyptian revolution and the tragic fate of its young protagonists who fell victim to the diabolical coalition of the Muslim Brotherhood and the army.

Read the review by Lebanese writer Elias Khoury on qantara.de.

Ruthless reappraisal of the Egyptian revolution

"The importance of this book, however, is based neither on its narrative style, which is strongly reminiscent of the Mahfouz era, the stereotypical portrayal of some characters, nor the simple and catchy language. Instead, it not only provides an impressive and detailed account of the events of the 2011 revolution, but also portrays a new generation of Egyptians who wanted to reach for the stars despite the political standstill in the country. They were however destined to fail due to the delayed effects of decades of authoritarian rule – the army, secret services and Muslim Brotherhood were the only truly organised forces in Egypt.

With his novel, Al Aswany breaks the culture of silence. The silence endemic in the art and culture establishment that wraps itself around the terrible systematic injustices that have occurred and continue to occur, not only in Egypt, but also in other authoritarian Arab regimes, reaching its bitter climax in Syria, where repression was the order of the day and where, in the end, death and destruction won out.

The tragic thing is that the Egyptian cultural scene has collapsed in the face of this apparatus of repression. By citing the danger posed by Islamists, it seems the dominant voices in society have gagged the opposition and silenced any critics. Not only that! The counter-revolution has also ushered in a new era of authoritarian rule that is even more repressive, discarding any last remaining vestige of humanity.

The courageous thing about Al Aswany is that he has dared to break the silence. It takes a brave writer to do so; and it is this courage that makes "The Republic of False Truths" so worth reading – as a testimony to our times and their shattered dreams," writes Elias Khoury.

Alaa Abd el-Fattah, arguably Egypt’s most prominent democracy activist, has just been handed another lengthy prison sentence. Despite this, a book of his writing has recently been ... END_OF_DOCUMENT_TOKEN_TO_BE_REPLACED

A prominent rights group in Egypt, the Arabic Network for Human Rights, is ending operations just as the country braces for a controversial NGO law. Is this the beginning of the ... END_OF_DOCUMENT_TOKEN_TO_BE_REPLACED

Moncef Marzouki was Tunisia's first democratically elected president after the fall of dictator Ben Ali. Today he is the most prominent critic of increasingly counter- ... END_OF_DOCUMENT_TOKEN_TO_BE_REPLACED

Asef Bayat, professor of Sociology at the University of Illinois, Urbana-Champaign, has been studying revolutions and how they affect people since 1979. In his recent book, " ... END_OF_DOCUMENT_TOKEN_TO_BE_REPLACED

Every year in December, the team at Qantara.de takes a look back at the articles that proved most popular with our readers. This year is no different. Here is a run-down of the ... END_OF_DOCUMENT_TOKEN_TO_BE_REPLACED

In this new bilingual edition, translated by Humphrey Davies, al-Jawbari, one of the thirteenth century's leading experts in skullduggery reveals all there is to know about the ... END_OF_DOCUMENT_TOKEN_TO_BE_REPLACED
Date:
Mail:
Send via mail

END_OF_DOCUMENT_TOKEN_TO_BE_REPLACED
Social media
and networks
Subscribe to our
newsletter