Skip to main content
10,000 Years of Art and Culture from Jordan

On the Origins of Human Civilization

From the oldest known human images, to the legendary city of Petra, to the early days of Islam – in Germany, the large Jordan exhibition "Faces of the Orient" is already a resounding success. Martina Sabra reports 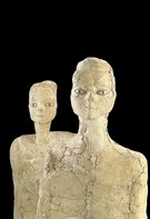 These two statues are among the oldest known human images yet found (from Ain Ghazal from the 8th century B.C.)

​​As everyone knows, the "cradle" of today's global civilization lies in the Near East. But whoever is interested in experiencing a vivid and artistically ambitious overview of the transition from a nomadic to a settled way of life that took place in this region some ten thousand years ago would do better in the next few weeks to travel not to the Near East but to Bonn, Germany instead.

Under the title "Faces of the Orient: 10,000 Years of Art and Culture from Jordan," the Art and Exhibition Hall of the Federal Republic of Germany is showing almost 600 exquisite objects that give the viewer sometimes surprising insights into the cultural development of the region and into the history of civilization as a whole.

Upon viewing the exhibition, it becomes evident that the so-called "Fertile Crescent" not only encompassed Mesopotamia, the land that is today Iraq and parts of Syria, but also the area on which Jordan now stands.

What's more, Jordan is where the oldest known human images yet found were discovered. The almost life-sized, remarkably expressive lime plaster figures from Ain Ghazal, which were probably used for ritual purposes in a 7th-century B.C. ancestor cult, gave the exhibition its name.

​​By contrast with its larger neighbors, Egypt, Syria and Iraq, an independent high culture never developed in the relatively small region that is today's Jordan, an area not exactly blessed with a wealth of natural resources. Nevertheless, this stretch of land along the Jordan River functioned for thousands of years as the crossroads of the world's oldest civilizations.

The climatic and geographic conditions here promoted the inhabitants' transition to a sedentary way of life. These developments are brought to life in the exhibits in a way that is easy even for the archeological layperson to follow. With many spectacular finds and an excellent accompanying catalogue, fascinating documentation is provided of the impressive uninterrupted 9000-year history of settlement on Jordanian ground:

From primitive Late Stone Age caves, through scattered farming settlements and the first towns, to the early nation-states out of which the biblical kingdoms of Ammon, Moab and Edom arose in the 1st century B.C.; from the highly advanced Hellenic cities of the Dekapolis, through the legendary kingdom of the Nabataens in Petra, to the magnificent desert palaces of the Omayyads in the early days of Islam. 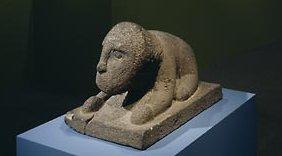 The figure of the "Bearded Sphinx" - habitat: Gadara

​​This exhibition underlines once more the importance of the area along the Jordan River as the birthplace of the three great world religions of Judaism, Christianity and Islam. The prophet Moses supposedly spent time on Mount Nebo; Bethany on the Jordan is thought to be where Jesus was baptized; and it is from here that Islam spread to the rest of the world.

It also becomes clear in this context that Jordan historically tended to unite the peoples of the region rather than separate them. The exhibit's organizers hope that the show will serve not only to educate the public and promote better intercultural understanding, but also to help boost tourism in Jordan, which continually suffers by association with the violence in neighboring countries.

Fawaz Al-Khreyshah, director of Jordan's office of antiquities, invites interested parties to experience Jordan first-hand and assures them that: "Despite the events in Iraq and Palestine – Jordan is still one of the safest countries for tourists anywhere in the world." 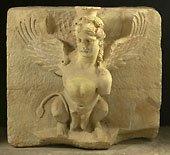 A winged sphinx from a fragment of a frieze - habitat: Petra, Temenos

​​Rounding off the exhibition is an entertaining and informative documentary film as well as a rich supporting program, which includes both expert lectures on the country's history and archeology as well as events featuring contemporary Arab writers and musicians.

It is hard to understand, however, why this program features almost exclusively non-Jordanian guests, while contemporary cultural figures from Jordan, for example authors Fadia Faqir, Amjad Nasser, Ibrahim Nasrallah or Faruk Wadi, are not even mentioned; nor are the nation's many artists, nor the Youth Orchestra of Amman, created with German support.

The multifaceted cultural scene in Amman and the fruitful German-Jordanian cooperation that has flourished for several years now might have been integrated more strongly into the program accompanying the exhibit in Bonn.

The exhibition "Faces of the Orient: 10,000 Years of Art and Culture from Jordan" can be viewed until August 21, 2005 at the Kunst- und Ausstellungshalle der Bundesrepublik Deutschland (Art and Exhibition Hall of the Federal Republic of Germany) in Bonn.

Translation from German by Jennifer Taylor-Gaida

Beirut - Casablanca - Paris
Arab Region Fashion Scene Is Lively and Creative
The Institute for Foreign Affairs introduces fashion as well as fashion designers from the Arab world. The fascinating garments dispel a great many widespread myths and provide evidence of a lively fashion scene. By Florian Wagner

Rasem Badran's Architecture
Building in Context
An architecture exhibition in Germany shows works by Rasem Badran, one of the most influential architects in the Arab world. Youssef Hijazi introduces the artist

Exhibition
Propaganda in Stone: Anti-Islamic Agitprop
Saracens in salacious poses, and beasts at prayer, facing Mecca: an exhibition of photos at Berlin’s Museum of Islamic Art follows the trail of anti-Islamic propaganda in mediaeval Christendom.