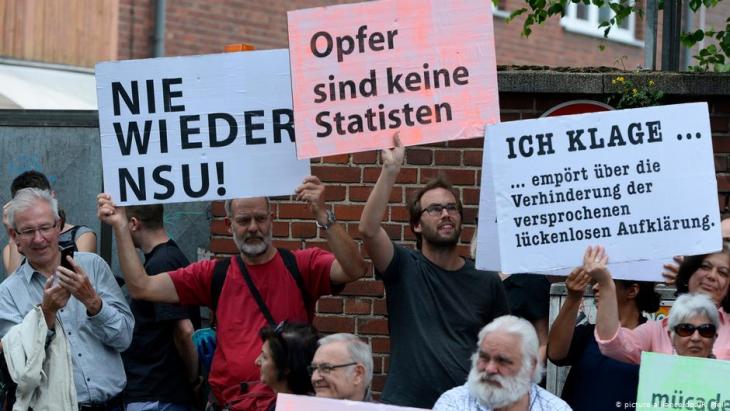 Anyone mentioning Cologneʹs Keupstrasse and radicalisation in the same breath cannot simply brush the matter of NSU terrorism under the carpet. Commentary by Sonja Hegasy

The constitution is turning 70, yet the terrorist attack on Keupstrasse seems well and truly forgotten. Unless, of course, you happen to be one of three million German-Turks, not to mention a few other Germans of ethnic origin. They know too well what Keupstrasse in Cologne stands for: on 9 June 2004, here in broad daylight on the busy shopping street, a nail bomb exploded that left 22 people seriously injured. A Turkish hairdressing salon was completely destroyed. At the time, the German authorities were quick to dismiss the possibility that the attack might have been the work of right-wing terrorists.

Today, we know that the bomb was planted by the "National Socialist Unterground" (NSU). Investigations into Keupstrasse were resumed after the suicide of two members of the group in late 2011, as well as the sending of a DVD by another group member Beate Zschape claiming responsibility. A Munich court pronounced judgements in the NSU trial just under a year ago.

Reasons for the radicalisation of young people

Last month, a complimentary copy of 'Schwarzrotgold - Das Magazin der Bundesregierung' (Black-Red-Gold – The Federal Government Magazine) was delivered with my weekly newspaper. One reportage focussed on the reasons for the radicalisation of young people and reported directly from Keupstrasse on the initiative 180 Grad Wende R (180 Degree Turn R). 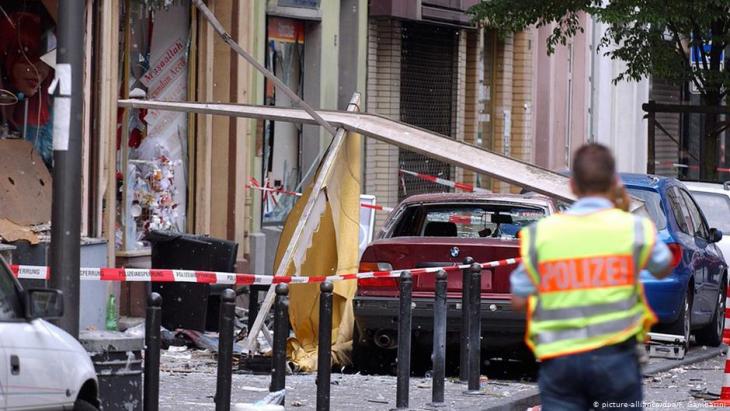 Traces of right-wing terror in Germany: On 9 June 2004, members of the so-called "National Socialist Underground" (NSU) detonated a nail bomb in front of a hairdressing salon on Keupstrasse. Twenty-two people were injured, four of them seriously. After the attack, the police assumed that the criminal Turkish milieu was settling accounts. There was no investigation of right-wing extremism. It was not until seven years later that it became clear that the NSU was responsible for the crime Translated with www.DeepL.com/Translator

Founded in 2012, the initiative campaigns for the values and norms of the constitution. The association aims to address young people radicalised – possibly as a result of a personal crisis – in the Islamist milieu. It also tries to reach those who may know someone currently in the process of being radicalised, someone who is perhaps not yet in a position to contact the authorities.

By sending out peers of a similar age with a migrant background from the same neighbourhood, the 180 Grad Wende R initiative aims to get on a level with those affected by radicalisation. All too often we hear the criticism that Muslims are not doing enough to counter Islamist terror. At 180 Grad Wende R, they are taking action. The initiative is led by German-Moroccan Mimoun Berrissoun.

The government brochure introduces a friendly social worker from the initiative, responsible for bringing high-risk young people in the Cologne district of Muhlheim back into the German democratic fold. The reporter and the coach stroll up and down Keupstrasse together. The initiative is hoping for more "courageous and fewer irate citizens", despite the fact that, to date, the term "irate citizens" has been used in the media to mean the opposite of young, disadvantaged and uneducated.

Reasons for a possible religious radicalisation are discussed: issues touched upon include a lack of appreciation, addiction, experience of marginalisation, separation from parents. But not a word about the NSU attack. Or is this "lack of appreciation" code?

"Keupstrasse is alive" is the title of a wonderful promotional film. Its residents don't want to be victims forever. And the well-known street of Turkish businesses and shops doesn't merely want to be associated with the attack.

But – German government take note – anyone writing about radicalisation should not brush the bitter context under the carpet.

Radicalisation on Keupstrasse? We would do well not to forget the mark left by the NSU terrorists.

Dr Sonja Hegasy is deputy director of the Leibniz Centre for Modern Oriental Studies in Berlin. From 2009 to 2016 she was Chairwoman of the Advisory Board 'Science and Current Affairs' at the Goethe-Institut in Munich.

The Hanau terror attack showed just how dangerous racist conspiracy theories can be. And yet it is a threat that continues to be underestimated. Commentary by Daniel Bax END_OF_DOCUMENT_TOKEN_TO_BE_REPLACED

How can we truly appreciate the richness of cultures not our own? In her recent book "What is Islamic art? Between religion and perception", art historian Wendy Shaw explains the ... END_OF_DOCUMENT_TOKEN_TO_BE_REPLACED

In his controversial book published in 2020, French author Pascal Bruckner describes anti-Muslim sentiment as a fiction, claiming that the term "Islamophobia" is being used to ... END_OF_DOCUMENT_TOKEN_TO_BE_REPLACED

Islam scholar and social anthropologist Marie-Christine Heinze is head of an academic exchange project with the University of Sanaa on "Post-conflict Reconstruction in Yemen". In ... END_OF_DOCUMENT_TOKEN_TO_BE_REPLACED

Several media reports in recent weeks have focused on the potential threat presented by Islamist groups in Germany. The discourse is fraught with generalisations, both sides ... END_OF_DOCUMENT_TOKEN_TO_BE_REPLACED
Author:
Sonja Hegasy
Date:
Mail:
Send via mail

END_OF_DOCUMENT_TOKEN_TO_BE_REPLACED
Social media
and networks
Subscribe to our
newsletter