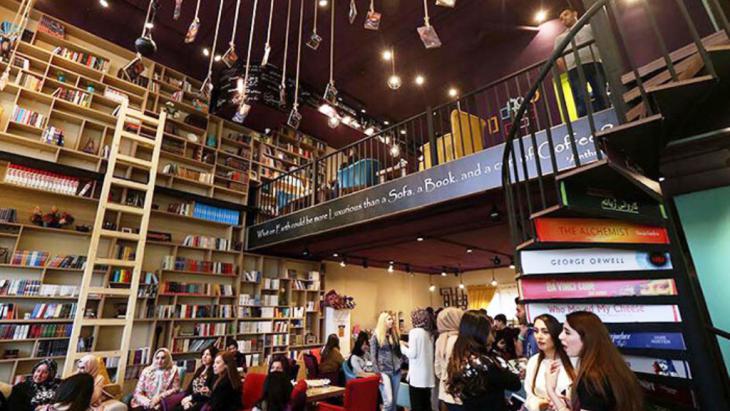 Though bookstore cafes in Europe, or even in most Arab countries, are by no means a revolutionary idea by now, one little establishment named Book Cafe has captured the imagination of both the Arab and international media. By Sahar Moqaddem

A small cafe in Iraqi Kurdistan has become the talk of the town and the reason is precisely that: that the cafe exists in Iraqi Kurdistan. Any journalist or individual who has ever been in contact with the region will know how difficult it is to launch such a project in Erbil, especially in light of the country′s economic crisis, its $22 billion debt and the regional government′s inability to pay salaries to public sector employees.

Add to this is the tumultuous security situation. Mosul, until recently occupied by Islamic State, is only about 50 kilometres away from Erbil. The situation is further compounded by the Syrian refugee crisis and the displaced Iraqis, as well as ongoing disagreements with the Baghdad government.

How then, under such circumstances, did Rafan al-Ta′i and her friend find the time and will to launch this unique, colourful project?

Enter the cafe and everything that is happening in the outside world seems to slip away. This feeling is not accidental; al-Ta′i, the cafe owner and an editor at Wikipedia, took her time and made every effort to carefully select every detail.

Each piece of furniture, each bookshelf, each decoration was meticulously selected and designed, giving the place its distinctive aesthetic. Visitors finds themselves surrounded by books as they sip on coffee or a snack; shelf upon shelf chock-full of books, a wall clock with numbers shaped like books and even a telephone and curtains in the shape of books.

The cafe has more than 3,500 books in Arabic, Kurdish and English. Yet, just over a year ago, it was extremely difficult to obtain any novel in Erbil, especially in Arabic and English.

Al-Ta′i tells us that she opened the cafe to encourage people to read. "I opened the cafe because I love beauty and I appreciate it. My main goal is to make people love books," she says. In her eyes, the primary cause of all conflicts is ignorance and dogmatism, whereas reading allows individuals to come to the realisation that "we are all so terribly similar."

The Kurds are under attack from two sides: from Turkey, and from Iran. The situation in their territories in northern Iraq is becoming increasingly desperate. Birgit Svensson ... END_OF_DOCUMENT_TOKEN_TO_BE_REPLACED

November 2022 sees the Arab world firmly in the spotlight with the COP27 in Egypt and the FIFA World Cup in Qatar. Public trust in MENA governments is weak, thanks to their ... END_OF_DOCUMENT_TOKEN_TO_BE_REPLACED

Thanks to climate change, the Middle East is heating up faster than any other part of the world, putting the region's ancient pyramids, castles, holy and other heritage sites at ... END_OF_DOCUMENT_TOKEN_TO_BE_REPLACED

In the run-up to the COP27 global climate summit, hosted by Egypt in November, it is worth noting that little rainfall, aggressive heatwaves and worsening drought make the Middle ... END_OF_DOCUMENT_TOKEN_TO_BE_REPLACED

Hundreds of porters, locally known as ‘kolbars’, cross the mountainous border between Iran and Iraqi Kurdistan all year round. With Iran’s economic crisis deepening, ever more ... END_OF_DOCUMENT_TOKEN_TO_BE_REPLACED

END_OF_DOCUMENT_TOKEN_TO_BE_REPLACED
Social media
and networks
Subscribe to our
newsletter