Ever since the AKP government came to power, Turkish foreign policy has been in a state of change: shifting from being largely passive to a dynamic, multi-dimensional diplomacy. The architect of this reorientation is Ahmet Davutoglu, Turkey's new foreign minister. By Nimet Seker

Ever since the AKP government came to power, Turkish foreign policy has been in a state of change: shifting from being largely passive and one-dimensional to a dynamic, multi-dimensional diplomacy. The architect of this reorientation is Ahmet Davutoglu, Turkey’s new foreign minister. Nimet Seker has the details 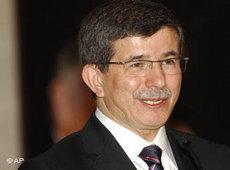 ​​A previous Turkish foreign minister, Ilter Turkmen, once said that Turkish foreign policy was always reactive: waiting till something happened and then simply defending its own position.

Since the end of the cold war, however, a process of rethinking has begun. Political scientists such as Duygu Sezer and Ali Karaosmanoglu from the highly-rated Bilkent University have proposed the concept of a "grand strategy" for Turkish foreign policy in place of this reactive approach.

"Instead of biding time a long way from the action, Turkey should become aggressive – in a positive sense," declared the political scientist Huseyin Bagci in Istanbul. "It should make its presence felt everywhere, and contribute to regional and global developments."

Ahmet Davutoglu, professor of political science and Erdogan's long-time chief foreign policy advisor, is acknowledged as the guiding intellectual force and architect of Turkey's new foreign policy. Indeed, many people believed Davutoglu was the "secret foreign minister" long before the comprehensive cabinet reshuffle this May in which he took over the post from Ali Babacan. 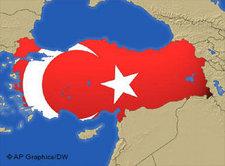 Strategic depth: "Only states which exert influence across their borders using 'soft power' can really protect themselves," says Davutoglu.

​​Unlike previous foreign ministers Davutoglu does not come from the urban elite; he is from the central Anatolian town of Konya. Like Prime Minister Erdogan and President Abdullah Gul he belongs to the new "Anatolian elite", which is seen as more Islamic and conservative. Within the AKP government policy however, they have taken a more pragmatic and modern line than their predecessors – particularly in the area of foreign policy.

The guiding principle of this new approach is the "no problem policy" towards neighbouring states. "Whereas in the 1990s Turkey had somewhat volatile relationships with its neighbouring states, today they are almost without exception excellent," says Davutoglu.

Previously Turkey had attempted to ensure its own territorial security by seeking to defend itself against dangers. "But today we know that only states which exert influence across their borders using 'soft power' can really protect themselves," writes Davutoglu in his book "Strategic Depth – The International Position of Turkey".

"Neo-Ottomanism" is the term used by critics to describe this return to a notion of a Turkey exerting power over its traditional Ottoman sphere of influence; those who use the term mean to imply that the new foreign policy involves the revival of imperial ambitions. 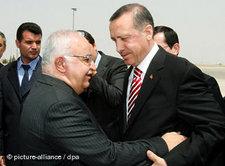 ​​Davutoglu's strategy of dynamic diplomacy in a changing region marks the ushering in of a political paradigm shift.

"Turkey as an international player was previously seen as having strong muscles, a weak stomach, heart problems and fair-to-middling brain power. In other words it had a powerful army but a weak economy, lacked self confidence and was not good at strategic thinking," says Davutoglu, who ran the institute for international relations at Beykent University before taking on the job of political advisor.

Nowadays, though, Turkey is involved at various levels of international politics, and has mediated in conflicts such as those in the Balkans, the Middle East or the Caucasus.

The role of discrete mediator has strengthened Turkey's position in the region: old enemies such as Russia, Syria or Iraq are now its closest allies. Russia in particular has developed into its most important energy and trade partner. During the Georgia crisis Turkey was largely responsible for bringing about the peace agreement between Georgia and Russia.

It was Davutoglu who played the most significant role in the secret 2008 peace negotiations between Syria and Israel. And it was thanks to him that warmth was breathed into the frosty relationship between Turkey and the autonomous Kurdish region of northern Iraq.

For decades there had been no diplomatic relationships between Armenia and Turkey, until President Abdullah Gul made an official visit to the country leading to the initial talks on opening the border.

In the Middle East conflict too Turkey is playing an increasingly significant role as a mediator between the Israelis and the Palestinians. Despite the bust-up between Prime Minister Erdogan and the Israeli president Shimon Peres at the World Economic Summit in Davos, Erdogan will remain an indispensible negotiator in the future, as for some time he has been attempting to mediate between the opposing Palestinian groups Hamas and Fatah.

Motor for the transformation of the entire region?

For Davutoglu this is the reason why the EU needs to make use of the opportunities Turkey can offer to help stabilise the region: 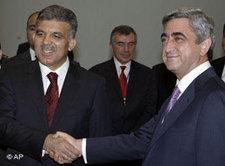 Change of policy: Turkey and Armenia broke off relations in 1993, following the conflict between Armenia and Azerbaijan over the region of Nagorny Karabakh.

​​"Ankara's potential for exerting a positive influence on the region," he emphasises, "is one of the main advantages to be gained by collaboration between the EU and Turkey on foreign policy. The EU is already a motor driving the process of change in Turkey and together the EU and Turkey could become a motor for transforming the entire region."

In the Arab world too developments in Turkey are being observed carefully. Many people there are talking about the "Turkish model" and see Turkey's dynamic, self-confident policy as a model to be emulated.

In Turkey itself the Kemalist establishment feels threatened by this paradigm shift. From among its ranks comes criticism of the AKP's "pro-Arabic, Islamist foreign policy." Semih Idiz, a columnist for the newspapers Hurriyet and Milliyet, attacks the new Turkish foreign policy:

"What we have seen over the last one or two years is not strategic depth but total confusion in the minds of all concerned." He sees it is wishful thinking to expect equally good relationships with all one's neighbours at the same time.

Like many other liberal critics Idiz emphasises the importance of a close relationship with the EU and fears that the government's new foreign policy is a sign that Ankara has lost interest in the EU.

Davutoglu's new foreign policy strategy is also having an effect on Turkish people's own self-perception. For many years they had a complicated view of their Ottoman past. Now here too a change in attitudes is taking place:

Cuneyt Zapsu, a close advisor to Prime Minister Erdogan says, "A new, positive role for Turkey in the world requires a reconciliation with its own past, the overcoming of societal taboos and a positive new concept of Turkish identity. We are the Ottomans' successors and should not be ashamed of this."

The fact that people are allowed to speak Kurdish in public or read Arabic will not cause the republic to collapse, he says.

Ahmet Davutoglu, known as "the Kissinger of Turkey", does not only stand for the dramatic change of direction in Turkish foreign policy; he could also play a positive role in the Arab world.

Davutoglu, who speaks fluent Arabic and taught for some time at the Islamic university in Malaysia, might also be in a position to alter ways of thinking in the Arab world - plagued as it is by historical enmities - and thus abolish divisions long seen as entrenched.

END_OF_DOCUMENT_TOKEN_TO_BE_REPLACED
Social media
and networks
Subscribe to our
newsletter