Skip to main content
A Tribute to Sabri Moudallal

A Legend and an Institution

Sabri Moudallal was a singer and a muezzin. In August 2006 the great Syrian interpreter of classical music died in the northern Syrian town Aleppo. Suleman Taufiq offers this tribute to the doyen of Syrian-Arab music 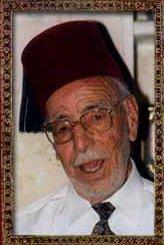 ​​Sabri Moudallal was a legend. The master of sacred singing and Koran recitation from Aleppo helped to revive the old art of Arab singing in its pure, unadulterated form and was thus one of the few musicians to elevate traditional music to the heights of a new popularity.

In his study of classical Arabic music Sabri Moudallal focused on the traditional music of Syria, particularly on the music from his hometown Aleppo, which is renowned for its diverse musical life.

Moudallal strove to further develop this music without abandoning its originality and traditions. Today we even speak of Sabri Moudallal's school of traditional music.

But Sabri Moudallal was not only a legend, he was also an institution in Syria. For not only was he a successful singer, he was also – like many musicians in Aleppo – a prosperous businessman. He was also the first to be appointed muezzin in Aleppo.

Born in Aleppo in 1918, Moudallal received at an early age a traditional training in singing and Koran recitation according to the classical tradition in Aleppo. Apart from the spiritual and religious dimension of his schooling, he was also taught the principles of perfect enunciation, the fundamental and most important study for a singer striving for a successful career.

Moudallal was later a pupil of the renowned musician Umar Al Batsch, with whom he enlarged his knowledge of classical Arab music. From him he also learned the muwashah.

The muwashah originates from Andalusia and is a vocal form of Arab music characterized by its poetical form and distinctive musical style.

Together with Ahmed Kabbani, Umar Al Batsch was regarded as the most productive and original composer of the muwashah. Motivated by his teacher Al Batsch, Sabri Mudallal intensely studied the secular as well as the religious muwashah and developed an extensive muwashah repertoire.

Official singer for the radio

In 1949 the radio station in Aleppo began broadcasting Sabri Moudallal's music. At the same time he assumed a position as a singer, and thus his fame spread throughout Syria. In 1954 he founded an ensemble for religious music together with Hassan Hafar, who later started his own group.

Several concerts performed in Paris in 1975 with his vocal quartet "The Muezzins of Aleppo" proved to be the turning point in Moudallal's career. From then on he also made a name for himself as a composer and especially as a singer for traditional Arab music outside his own country.

He was highly esteemed among musicians not only for the beauty of his singing but also for his unique singing techniques. His breathing technique enabled him to breathe while singing, which made it possible for Moudallal to sing for long periods of time without a pause.

But although he became famous especially as a singer of sacred music, he was also at home in the world of secular music.

Even as an old man Sabri Moudallal was able to expand his career. In the later years of his career he devoted much of his attention to the performance of the wasla.

The wasla (suite) consists of a number of compositions and improvised instrumental and vocal pieces, all played in the same maqam, or mode. Even today it is performed in Aleppo in many private concerts in the houses of wealthy, traditional families.

With his multi-faceted voice Sabri Moudallal captivated his listeners. For many people his style of singing was equivalent to a revelation. Listening to this charismatic musician was a truly an experience.

Translted from the German by Nancy Joyce

END_OF_DOCUMENT_TOKEN_TO_BE_REPLACED
Social media
and networks
Subscribe to our
newsletter