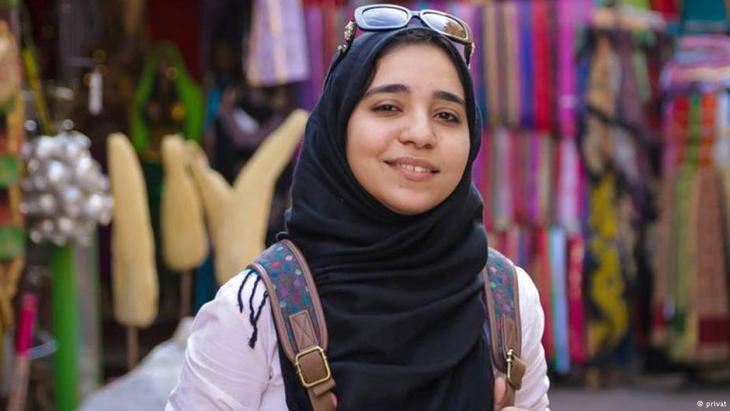 Abducted civilians in Egypt
The disappeared

Again and again, one hears reports of young people simply disappearing in Egypt when out on the street, at university or out for dinner with friends. Esraa el-Taweel is one of them. After a protracted search, her family finally tracked her down in a Cairo prison. Elisa Rheinheimer-Chabbi has the details

All of a sudden Esraa was gone. She just disappeared. On the evening of 1 June, she had plans to meet two friends for dinner. In Maadi, a suburb of Cairo, the 23-year-old met up with Sohaib Saad and Amr Mohamed. But the three students never returned from their dinner. "Mobile phone tracking revealed that they were at the police station in Maadi," Esraa's father, Mahfouz el-Taweel, says, "but the authorities denied it." Afterwards, the phone was switched off. And then came nothing. No message, no arrest warrant, no information.

Within the space of two months, 163 Egyptians have been "forcibly abducted". This is the number released a few weeks ago by the Egyptian organisation "Freedom for the Brave". Some of those who have disappeared turn up in prisons, where they are being held without charge; others are found dead on a dirt road; many have vanished without a trace; no one knows what has become of them.

"The number of those missing has increased rapidly these past few weeks," notes Mohamed Abdel Salam, who works for an Egyptian NGO. "But both the Interior Ministry and the military simply deny that any abductions have taken place." 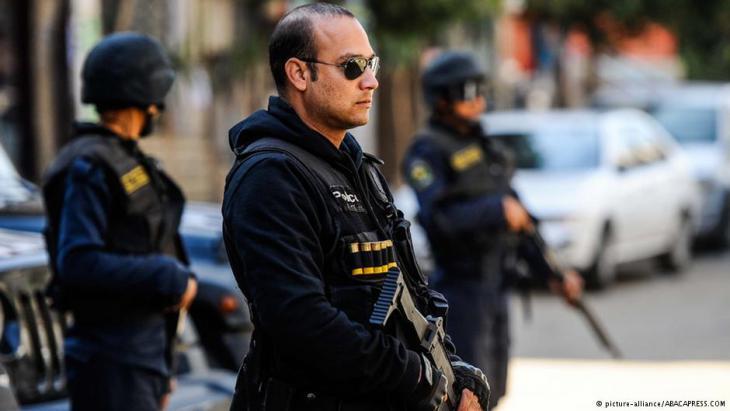 Like an iron fist against undesirable dissidents: ever since Sisi assumed power, there has been a dramatic increase in attacks on members of the opposition, dissidents and independent journalists. Pictured here: members of the Egyptian security forces in Cairo

Esraa el-Taweel was studying sociology in Cairo and working as a freelance photojournalist before she disappeared. Her friends describe her as a cheerful young woman, a bit naive, with a good sense of humour. She is well-known in the social networks and has many friends in the offline world as well. But her dearest companion is her cat, Woody. "Esraa even took the cat with her on her pilgrimage to Mecca," recounts a friend.

Esraa led a completely normal life in Cairo; well, almost normal, because until recently she was confined to a wheelchair. She was wounded by gunfire in January of last year as she took pictures of the protests on the anniversary of the 2011 revolution. Now she is walking on crutches. "What kind of threat is posed by a disabled young woman?" Esraa's mother asked in despair on Facebook. "She is not a political activist but an amateur photographer."

Human rights organisations confirm that arrests and convictions without trial are the order of the day in Egypt under the rule of President Abdul Fattah al-Sisi. By no means all of those who are missing are supporters of the Muslim Brotherhood or the secular, government-critical "April 6 Youth Movement". Sarah Whitson of Human Rights Watch remarks: "Some are activists, some have only been seen in the vicinity of demonstrations, and some are taken arbitrarily, such as Esraa and her friends." She adds: "These are not just a few corrupt policemen – there is a system behind it."

Esraa's father, Mahfouz el-Taweel, is wretched with worrying about Esraa, and is also anxious about his wife and their two other daughters. He is currently in Saudi Arabia on business and doesn't dare to fly back to Egypt for fear of being arrested himself. "Then I could do nothing more for Esraa, and my family would be all alone," he says. They wait for weeks for a sign. And then, 16 days after her disappearance, they hear a rumour that Esraa has been seen at Al-Qanater, the Egyptian capital's infamous women's prison. 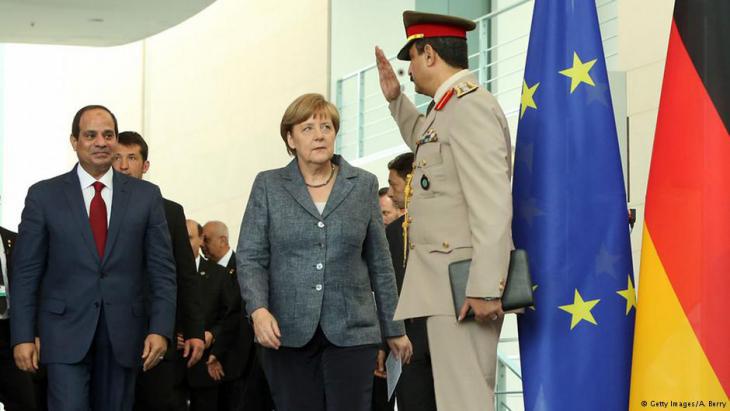 "Rolling out the red carpet" for al-Sisi: Abdul Fattah al-Sisi (left) and Angela Merkel during the former's recent visit to Berlin. "The EU is disappointingly cautious with regard to the massive human rights violations in Egypt," says Nicole Lambert of the Euro-Mediterranean Human Rights Network

Weeks of uncertainty and fear

On the night of 17/18 June, armed police units storm the home of the el-Taweel family in Cairo. "They took Esraa's laptop and four other laptops," says the head of the household in a tremulous tone. The family's lawyer arrived and demanded a search warrant, asking the policemen to sign a document stating that they had taken the devices. They laughed in his face and pushed him aside, pointing their rifles at him. The next day, media sources close to the government reported that evidence had been found on Esraa's laptop that she had sent important strategic information and photos to "foreign forces". "That's ridiculous," says her father. "It's all a big lie." His voice breaks in agitation.

The next day – after 18 days of anxious uncertainty about whether her daughter is still alive – Esraa's mother is permitted to visit her in prison. They are given 15 minutes to talk. "I'm so scared for my daughter," her father says quietly. Then he starts to cry. "I'm afraid that they are torturing her, that she will be forced into making some sort of confession. Maybe that has already happened, I don't know."

Mahfouz el-Taweel is in the same position as so many other Egyptians whose loved ones have gone missing: he feels helpless. Just like the activist Mohamed Abdel Salam, he is also hoping for assistance from Europe. But Europe remains silent.

"The EU is disappointingly cautious with regard to the massive human rights violations in Egypt," says Nicole Lambert of the Euro-Mediterranean Human Rights Network. Instead, she notes, Germany is "rolling out the red carpet" for al-Sisi, and Britain also has plans to receive the president in the near future.

"We don't know what to do," Esraa's father says, his voice faltering. "It's a nightmare for us."

Sisi’s mismanagement has plunged the country into crisis. Both political and economic reform is needed to save it, writes Abdelrahman Mansour END_OF_DOCUMENT_TOKEN_TO_BE_REPLACED

The devaluation of the Egyptian pound combined with rising food prices is taking its toll on Egypt. More and more people are slipping into poverty. Karim El-Gawhary reports from ... END_OF_DOCUMENT_TOKEN_TO_BE_REPLACED

Egyptian Sufis have been on the defensive against the country's Islamists for decades. Meanwhile, interest in mysticism is growing among the young members of Cairo’s middle and ... END_OF_DOCUMENT_TOKEN_TO_BE_REPLACED

Abortions are illegal in Egypt unless they are necessary to save a married woman's life. But that doesn't stop local women from having one. Egyptian society needs to acknowledge ... END_OF_DOCUMENT_TOKEN_TO_BE_REPLACED

Food prices doubled, salaries halved, banks restricting withdrawals: Egyptians now have the same problems as the Lebanese. But if things get worse here, the fallout will be far ... END_OF_DOCUMENT_TOKEN_TO_BE_REPLACED

END_OF_DOCUMENT_TOKEN_TO_BE_REPLACED
Social media
and networks
Subscribe to our
newsletter