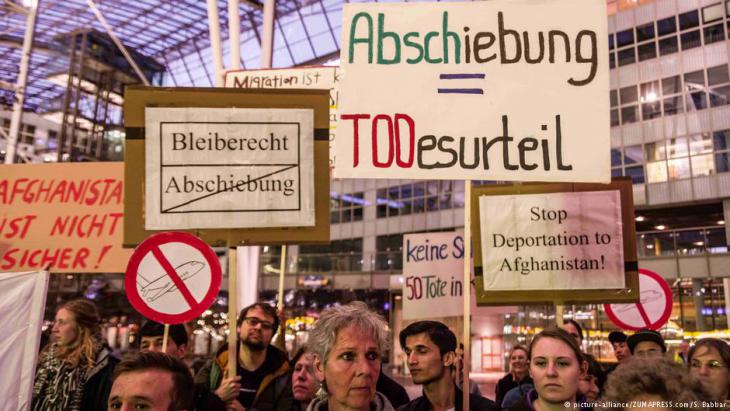 For dozens of Afghan asylum seekers in Germany, an interview with German officials is a decisive moment that shapes their future. Despite serious security concerns, many asylum applications by Afghans are rejected. By Zivile Raskauskaite

Bibigul* lives with her family in Cologne, the fourth-largest city in Germany. "I have lived all my life like this, with my family," the 24-year-old from Afghanistan says. She tries to ignore the fact that the situation might change, despite the fact that her asylum application has been rejected.

Bibigul′s family came to Germany as refugees one and a half years ago. She says that the day when they fled to neighbouring Iran, she thought they would be back home in a few days or months. She never imagined that Germany would be their final destination. "I planned to become the foreign minister and I studied for that," says Bibigul. "I planned a lot of things for my life in Kabul and I miss the time when I worked very hard to ensure I had a good future, but now everything has finished and everything has changed," she adds.

Her family did not find support in Iran. "Iran′s police took away Afghan refugees and if someone did not have documents, they deported them to Afghanistan," explains Bibigul. Fearing deportation, Bibigul′s family lived in hiding. After a while, they fled to Turkey and then to Germany.

After applying for asylum in Germany, Bibigul′s family members were granted refugee status. However, she herself was rejected. According to officials, the interview did not reveal that the young woman would be persecuted upon her return to Afghanistan. Bibigul now either has to leave Germany or find a lawyer and appeal the decision through the courts.

Bibigul is silent when asked about the reason why her family had to flee their home country. She explains that because her case is ongoing, she cannot reveal all the details. "After what happened to my family in Kabul, in one of its big neighbourhoods, I cannot go back," she says, adding, “I would be killed.”

According to the German government, Kabul is one of the safe areas of Afghanistan. The law says that if a person can find an alternative safe place inside the country, he or she should not be granted asylum. The discussion about safe areas in Afghanistan has consequently contributed to a drop in the number of Afghans who were granted asylum in Germany. In 2015 it was 78 percent and until November 2016, it was still above 60 percent. This year is the lowest so far, at 47.9 percent for January and February.

"To go back [to Afghanistan] for an active and single woman is impossible," says Bibigul. "It′s not a European country, it′s not safe," she adds. Having been informed that her asylum application had been rejected, Bibigul found a lawyer straightaway and filed an appeal against the decision. 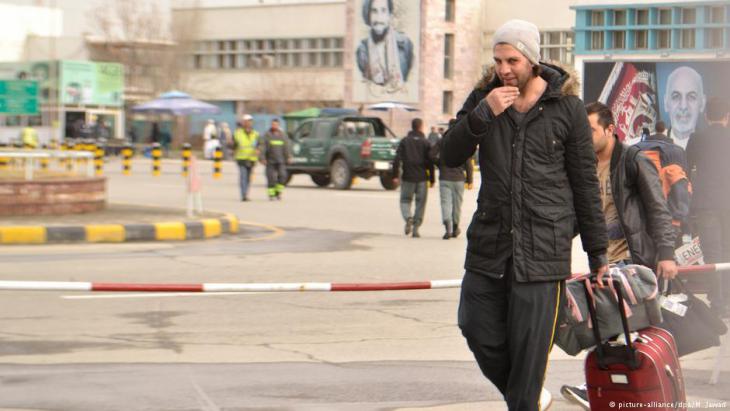 Obaid Ros from the province Nangarhar in east Afghanistan leaving Kabul airport. Ros said he had been living in Landshut for 7 years. He had a job and repaired computers. “I really don’t know why they stopped my asylum application”, he said. The deportations to Afghanistan are controversial since fighting between government troops and the Taliban still continues, with almost daily attacks. Around 250,000 Afghans live in Germany, 11,900 of them are obliged to leave the country. Last autumn Germany reached an agreement with Afghanistan about the return of asylum-seekers

Bernd Mesovic, deputy director and expert on legal affairs at PRO ASYL, says that the growing numbers of declined Afghan asylum seekers is part of Germany′s strategy. "It′s a policy which acts to deter Afghans who might be considering fleeing to Europe and Germany in the future," he says. Currently, people from Afghanistan are the second-largest refugee group in Germany after Syrians.

Mesovic disagrees with the idea that there are so-called "safe areas" in Afghanistan. "The security situation has become increasingly difficult in a growing number of provinces and districts," he says, adding, "Afghan refugees now have all the more reason to flee."

No time for refugees′ stories

The asylum procedure is long. However, the most important step is an interview at the BAMF′s office where refugees explain the reasons why they fled their home country. Bibigul says it is a puzzling procedure. The first thing that confused the young woman was the statement that the answer had to be a yes or a no, or a very short one, because the officers did not have time.

"How can people do this?" she asks. "It′s someone′s life. How do they not have time for someone′s life? I don′t understand." Now, Bibigul is able to reflect on what happened, but when she went for her interview, she thought the officer already knew her story because she was expected to give short answers. This was another thing she heard from people who had been through this procedure before.

Bibigul was also disappointed with the officials who interviewed her. "They didn′t know anything about Afghanistan," she said, adding that they needed to learn more. "They should look on the Internet for information."

Bibigul′s interview took an hour and a half. According to BAMF, the interview should be carried out in the language which is best known by the asylum seeker. Bibigul speaks Dari. However, the translator assigned to work with her was from Iran and spoke Persian. Bibigul said that first of all it took time for her and translator to understand each other before she could answer the official′s questions. 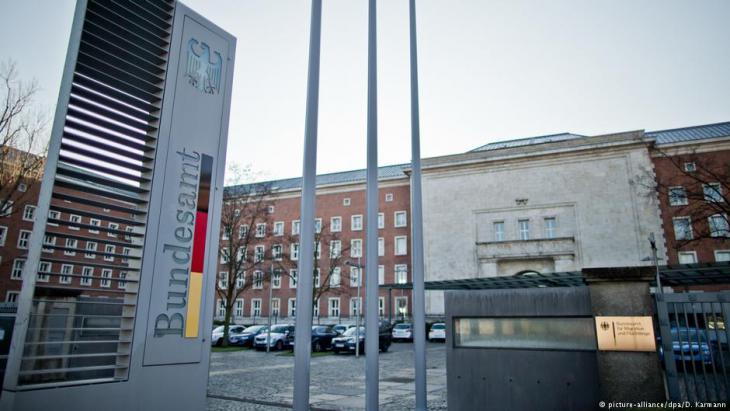 Currently the BAMF has approximately 8,300 employees – around 2,550 of these are decision makers. Kira Gehrmann, a spokesperson from the Federal Office, confirmed that in some cases the person who conducted the interview is not responsible for the decision and in these cases the decision is being made by a decision maker in one of four decision centres.

Anna Busl, a lawyer based in Bonn, works with almost one hundred people seeking asylum in Germany. Busl′s experience shows that Bibigul is not alone and thousands of Afghans are filing lawsuits against BAMF decisions in the area.

"The court, for example in Cologne, has so many appeals submitted by Afghan refugees that they say it will take years; hearing these cases will take a lot of time," she explains.

Busl has read many transcripts of interviews with asylum seekers and says she repeatedly sees the same flaws. "It seems that the people conducting the interviews and reaching the decisions don't really have a good understanding, firstly, of what it means to have an interview with a refugee and, secondly, what the situation in Afghanistan actually is."

As more and more asylum applications get rejected, the final decisions are simply copied and pasted from one case to another, without being of any relevance to individuals' stories, the lawyer says. This is one of the reasons Busl believes that most of the appeals will be successful.

Currently the BAMF has approximately 8,300 employees – around 2,550 of these are decision makers. Kira Gehrmann, a spokesperson from the Federal Office, confirmed that in some cases, the person who conducted the interview is not responsible for the decision. In such cases, the decision is reached by a decision-maker in one of four decision centres.

Julia Scheurer from the Flüchtlingsrat NRW e.V, an NGO advocating for refugees rights, has also noticed problems with the way interviews are structured during the asylum procedure. "We feel it is really important that the person who decides on the case also has the chance to get an impression of the person, to see their emotions, to actually interact with a person, not only to read a protocol and written transcript of the interview," says Scheurer.

"But that is what is happening now, because there are simply so many asylum seekers: so many interviews have to be conducted that BAMF has divided the process," she adds.

Meanwhile, Busl says asylum seekers – especially those who are appealing their rejections – should work on improving their skills as they wait for a decision from the courts. "The only advice I can give to them is to use the time to get on with their life, which means learning German, getting a job, studying, doing whatever they want to do with their life, because otherwise they could just be sitting around for months."

Home
Print
Newsletter
More on this topic
Deportations to Afghanistan: No safe country of originAfghan refugees and the right to remain: Fast-track baptismsFighting the Taliban in Afghanistan: Where the warlords still hold sway
Related Topics
Migration, Migration in Germany, Policy on refugees and migration, Refugees
All Topics

Education for girls and women is still possible in Afghanistan, says Reinhard Eroes of the Kinderhilfe Afghanistan initiative. In interview with Elisa Rheinheimer, he talks about ... END_OF_DOCUMENT_TOKEN_TO_BE_REPLACED

A lawmaker in Pakistan's rugged northwest was sipping tea with voters when his phone chirped to life – the Taliban were calling with a demand for 'donations'. "We hope you won't ... END_OF_DOCUMENT_TOKEN_TO_BE_REPLACED

Cries of "Benghazi!" still resonate across the USA ten years after a deadly terrorist attack in Libya killed the U.S. ambassador and three other Americans. Ethan Chorin re-tells ... END_OF_DOCUMENT_TOKEN_TO_BE_REPLACED

Sufism has fluid boundaries. Just like Islam, Sufism is inconceivable without its late antique roots. Then again, it has also exerted an influence on Hinduism. Moreover, the Sufic ... END_OF_DOCUMENT_TOKEN_TO_BE_REPLACED

Journalist Waslat Hasrat-Nazimi was forced to flee Afghanistan with her family as a child and grew up in Germany. To mark the publication of her book "The Lionesses of Afghanistan ... END_OF_DOCUMENT_TOKEN_TO_BE_REPLACED

Just as the Islamic Revolution fundamentally changed Iran 43 years ago and had an impact far beyond the country's borders, the current wave of protests sweeping the country is set ... END_OF_DOCUMENT_TOKEN_TO_BE_REPLACED
Author:
Zivilé Raskauskaite
Date:
Mail:
Send via mail

END_OF_DOCUMENT_TOKEN_TO_BE_REPLACED
Social media
and networks
Subscribe to our
newsletter