Afghan Cinema
"We Were Lacking Just about Everything"

At 25, Roya Sadat is Afghanistan's youngest filmmaker. During the years of the Taliban regime, she sat alone in a small room in Herat and learned about directing by reading American handbooks on filmmaking. Interview by Fahime Farsaie 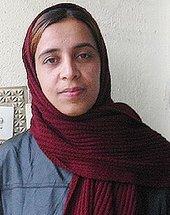 During the shooting of "Three Dots", Roya Sadat had to grapple with the local potentate's opposition

​​Take note of this name: Roya Sadat, born in 1981 in Herat, Afghanistan. Her first name translates as "Dream." Becoming a filmmaker was her innermost dream, one that she has now been able to realize despite immense barriers. Her debut film as director, "Three Dots," was screened at the first Afghanistan Film Festival at the Cologne Filmhaus that took place April 14-24.

Roya acquired her cinematic skills through "learning by doing." Since her puberty she has been grappling with the theoretical imperatives of the seventh art.

During those years she sat alone in a small room in Herat and read handbooks on filmmaking, by American author Syd Field, among others – the books were translated into Persian by Iranian translators – while the Taliban tried with all their might to make her country into a zone free of film and art. 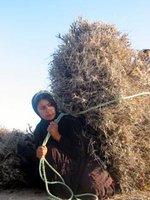 ​​Just after the barbarian Taliban regime was ousted, Roya took up contact with a handful of Afghan cineastes in Kabul who had begun with the cultural reconstruction of the capital. The director Siddik Barmak – who was at the time busy shooting what became his internationally renowned film "Osama" – thought Sadat's film projects were worth supporting, so he took her on as a script writer for two short films and got a Japanese production company to fund her feature project "Three Dots – Se Noughta."

"Se Noughta" tells the sad story of a single woman named Gul Afrooz living in a village in northwestern Afghanistan along the border to Iran and struggling to raise her three helpless children. Although she is engaged to her lover Firooz, she is forced to marry an old warlord, a khan. Caught up in traditional structures, the Khan sends her to Iran as a drug courier for an opium smuggling ring. The ring is busted and she is arrested.

Sadat uses realistic images to narrate the bitter fate of this woman who flees from misery, poverty, drought and hunger only to land in a prison in Iran.

Is the life of Gul Afrooz typical of Afghani women who live in rural areas?

Roya Sadat: During the period of drought in Afghanistan, which lasted for over six years, many women in this area of the country were left without means and had to fight to survive. They were exposed not only to the forces of nature, but also to the arbitrary rule and the coercion of the khans who ruled in the region. They were forced by the khans to serve as drug couriers. While we were shooting the film, their followers gave us trouble. On the sixth day of shooting some armed clan lords drove us out of the area. They said we were strangers and would have a negative influence on their women. In this region they don't even have television sets. The clans had never seen a film team on which men and women work together.

What does the collaboration between men and women look like in an Afghan film team?

Sadat: Just like a badly equipped, understaffed film team suffering from a lack of professionalism like anywhere else in the world. Only we had guts and faith. We were lacking just about everything: money, lighting, professional support. Sometimes I even had to serve as a cook! We had a lot of problems, right from the beginning.

What kind of problems?

Sadat: I spent two years looking for a young woman to play the lead role. Under the condition that Gul Afrooz would not carry on any long dialogs with men in the film, her husband said she could play the role. After ten days of shooting he changed his mind, Gul Afrooz had to go home. But then she continued to play the part. Without her strong will and her dedication our project would have been doomed. She was even able to get through the crisis in her marriage afterwards.

Except for the technical problems with your film, "Three Dots" has an aura of authenticity. Is this becoming a trend in Afghan cinema? Is there a general language for Afghan cinema?

Sadat: It is too early yet to speak of "Afghan cinema." It will take a while until such a thing can be discovered and defined. But if you are talking about the objective content of a film, then perhaps you can speak of Afghan cinema. That is, films that grapple with the realities in our society and offer an unsparing description of it, for example the film "Osama." The fact is, however, that "Afghan cinema" at the moment is trying to show reality rather than create it on film. Because at the moment we are in a phase of working through things. We are busy dealing with reality, which is unfortunately composed of misery, poverty and injustice.

Is this development being influenced by outside elements – for example by Iranian film?

Sadat: Iranian cinema certainly has a longer tradition than ours and is more progressive. The Afghani filmmakers imitate but not their Iranian colleagues. In addition, Iran and Afghanistan have – historically speaking – a similar culture and a common language. The aesthetic similarities can perhaps be traced to these communalities. I am sure that Afghan cinema will soon develop its own film language and its own unmistakable identity.

Translation from German by Christina White

Interview
An Afghan View of Suffering
"Osama" is the first full-length film to emerge from Afghanistan since the fall of the Taliban regime. It is an attempt to come to terms with the country's history – and it already won a Golden Globe Award. Amin Farzanefar spoke with the film's director, Siddiq Barmak

END_OF_DOCUMENT_TOKEN_TO_BE_REPLACED
Social media
and networks
Subscribe to our
newsletter