Making films in a country that has been torn apart by years of war and occupation is truly a tall order, but this is what Salim Shaheen has done – over 100 times. For many, Shaheen is Afghanistan's answer to Steven Spielberg. A new documentary shines a spotlight on the zero-budget filmmaker and his films. By Jochen Kurten

Master of Dreams ("Meister der Traume") is the German title of French journalist Sonia Kronlund's first feature-length documentary, "The King of Nothingwood". It is a good epithet for the filmmaker. Less appropriate, however, is Shaheen's nickname: Afghanistan's Steven Spielberg. This man has nothing in common with Hollywood glamour and red carpets.

Salim Shaheen is a director, producer and often his own leading man. For 30 years now, he has been making films in his native Afghanistan, a country ravaged by foreign interventions and civil wars. In her documentary, "The King of Nothingwood", Sonia Kronlund explores how he  managed that in the past. The film is not only a journey into the midst of a crisis-stricken country, but also a journey to its people, their dreams and their desires.

Shaheen's films are trash, at least according to cineastic or western European criteria. They resemble a mix of Bollywood and kung-fu drama, taking the occasional Rambo-style loan from Hollywood. Most of them are action movies lasting several hours with no discernible plot, made up of endless fistfights and skirmishes between their protagonists. Shaheen has made over 100 films to date and built up a huge popular following.

Salim Shaheen managed to bypass the Taliban's ban on images. Although Kronlund can't quite explain in her documentary how he managed to do this, she does give hints. For example, Shaheen is perfectly willing to make compromises towards the state. Nevertheless, his films are also subversive.

In a nod to the country's strict rules, there are no actresses allowed in his movies. Nor are there any women in "The King of Nothingwood", with the exception of Sonia Kronlund. The French director is always present in her own film, visible as she interviews the "master" and accompanies Shaheen on location for his 110th movie. 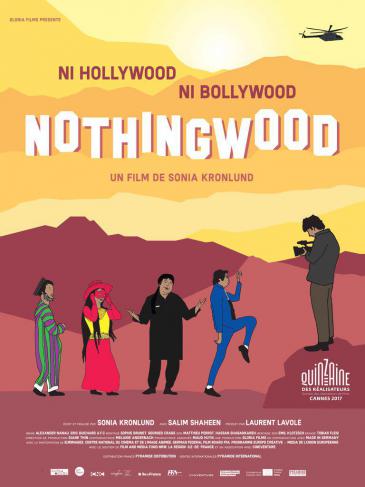 Salim Shaheen is often director and lead actor in one. For three decades, the Afghan director and producer has been making films – a mixture of Bollywoord and Kung-Fu – in his own country, a land plagued by foreign interventions and civil wars

Salim Shaheen can safely be called a subversive filmmaker. The way he deploys his favourite actor, Qurban Ali, for instance, explodes Afghan viewers' traditional views of gender roles. Qurban Ali, a gay man, plays women with such skill and absurdity, such exaggeration and glamour, that one can only watch in utter fascination.

Viewers seem willing to tolerate that on screen in Shaheen's movies. In "real-life" Afghanistan, however, the same behaviour would be inacceptable. That makes it a bitter irony that Qurban Ali did not return home after the Cannes premiere of "King of Nothingwood", preferring to stay in Europe, where he has remained ever since.

Kronlund portrays Salim Shaheen as a charismatic character with enough personality to fill a room, eliciting applause wherever he goes. Shaheen, flaunting his obviously overweight body with pride, is the epitome of strength and vitality. He is vain and convinced of himself, yet also likeable in his child-like way. Director Shaheen is more a master of the art of life than the cinematic arts.

It would have been interesting to learn more about his earlier artistic ambitions. A few clips from older works show Shaheen in films slightly reminiscent of Italian neo-realism or gaunt socio-critical Iranian cinema. In these brief moments, we see a director and actor who knows how to tackle the brutality of life in Afghanistan.

He also includes the horrors of life in Afghanistan in his movies, for instance in a scene from an older film, in which he addresses his own time as a soldier. The only survivor of a massacre, he lay still among soldiers dying and dead, hoping to escape the attackers by going unnoticed. A horrifying experience recreated on screen.

He copied this "survival tactic", says Shaheen in the documentary "King of Nothingwood", from the cinema: how to survive in the midst of dead bodies. This key scene highlights Salim Shaheen's entire dilemma: he cannot escape  war, yet with the aid of film and cinema, he has found his own way out of misery.

Yet for many in Afghanistan, his passion captivates and thrills them, letting them dream of a better life – the positive conclusion of this extraordinary documentary.

Just as the Islamic Revolution fundamentally changed Iran 43 years ago and had an impact far beyond the country's borders, the current wave of protests sweeping the country is set ... END_OF_DOCUMENT_TOKEN_TO_BE_REPLACED

One year ago the Taliban returned to power, seizing Kabul; the U.S. and its allies made a panicked exit from the country. Of all the books written on the subject, four stand out ... END_OF_DOCUMENT_TOKEN_TO_BE_REPLACED

Jonas Poher Rasmussen's Oscar-nominated animated documentary “Flee” focuses on the life of a refugee from Afghanistan. Based on a true story, it centres around the question: when ... END_OF_DOCUMENT_TOKEN_TO_BE_REPLACED

The Biden administration could have used Pakistan’s economic crisis to compel the country to sever its longstanding ties to terrorist groups. Instead, the U.S. protects and ... END_OF_DOCUMENT_TOKEN_TO_BE_REPLACED

No country in the Islamic world is influenced as strongly by the traditions of Sufi culture as Pakistan. Yet the Sufis there have been under attack from Islamic hardliners for ... END_OF_DOCUMENT_TOKEN_TO_BE_REPLACED

END_OF_DOCUMENT_TOKEN_TO_BE_REPLACED
Social media
and networks
Subscribe to our
newsletter