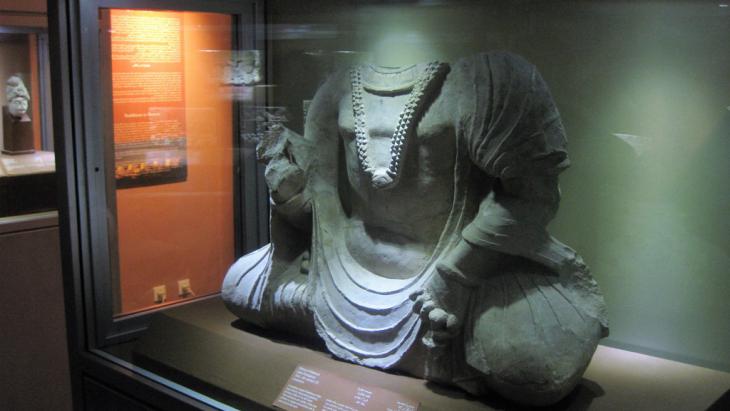 The tragic history of Kabul is nowhere more clearly seen than at two adjacent historical sites: the ruined shell of the Darul Aman Palace and its close neighbour the National Museum of Afghanistan, where visitors are hard pressed to find a Buddha with its head intact. By Emran Feroz

Soldiers patrol the grounds of the museum and it is not until one has undergone several body searches that one finally gains entry to the inner courtyard, where among other things one finds Afghanistan's first, and last, locomotive, a product of German engineering. A few steps further on, one encounters the automobile collection of a former Afghan monarch. Most of the classic cars are from the 1920s and belonged to King Amanullah Khan, who maintained close relations with Germany and was responsible for building the museum.

Noor Agha, a friendly member of the museum staff, is on hand to greet visitors in the entrance hall. He has worked in the museum for almost twenty years and was witness to both its bombing during the civil war and, years later, its rise from the ashes following restoration.

"Things were particularly bad during the civil war," he recalls. "We were all evacuated and the museum was used as a military base. A great deal of looting went on and many of the museum's treasures were destroyed or lost at that time."

Most of the unique objects that disappeared were from the Kushan era, early Buddhism or the beginnings of Islam. Many of them still turn up from time to time on the black market and the museum does everything it can to get them back. "We are working with Interpol, the UN and other organisations and try everything we can to recover the objects. They are an important part of our culture and of the unique heritage of the Afghan people," says museum director Mohammad Fahim Rahimi.

Iconoclasm under the Taliban

The museum staff also suffered under the Taliban. They were ordered to destroy any of the exhibits considered by the extremists to conflict with their radical beliefs. Figurative sculptures – mainly statues of Buddha – were to fall victim to this fanaticism. And the results of this 'cleansing' are still there for all to see: barely a Buddha statue remains in the Afghan National Museum today that is not headless. 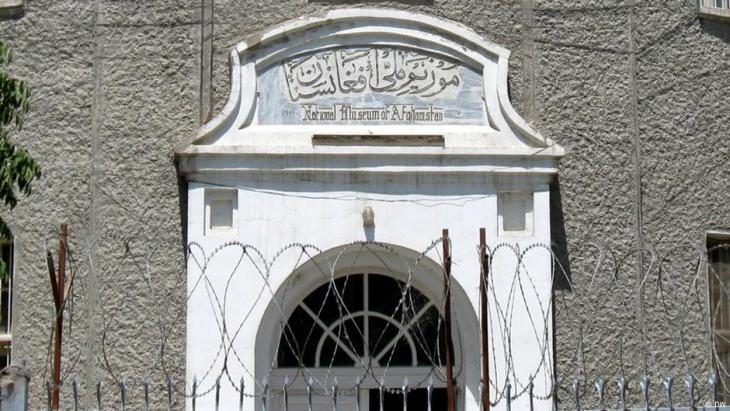 Behind razor wire and heavily guarded: only a fragment of the National Museum of Afghanistan′s collection has survived the civil war and Taliban rule. Most of the unique objects that disappeared were from the Kushan era, early Buddhism or the beginnings of Islam. Many of them still turn up from time to time on the black market and the museum does everything it can to get them back

Walking through the museum, it is difficult to remember that one is in Kabul. The atmosphere in this peaceful oasis seems a world away from the crowded, noisy, dusty city streets outside. The quiet though is not down to a lack of visitors. "Interest in Afghan history has grown in recent years, particularly among our young people," museum director Rahimi is keen to point out.

Noor Agha, with his gift for telling stories, is one of a handful of guides who show visitors around the collections. Apart from his encyclopaedic knowledge of the history of every single exhibit in the museum, he also possesses an ability to transport visitors back in time, bringing to life times past when the teachings of Buddha were being disseminated through the Hindu Kush or Mahmud of Ghazni was founding his great Islamic empire. 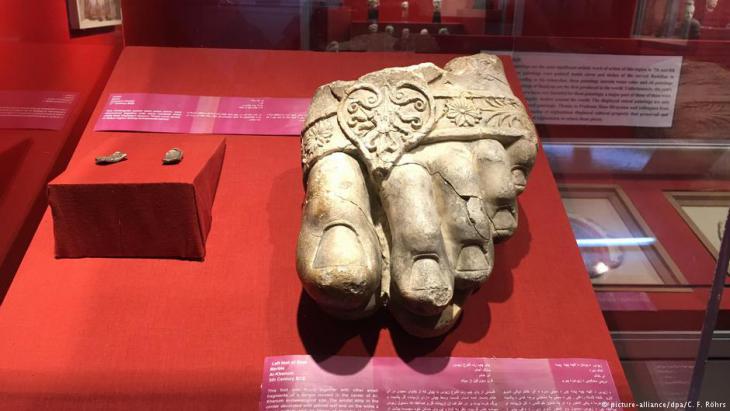 Surprise return of stolen artefacts: one piece – the foot of a gigantic statue of Zeus from an ancient city in northern Afghanistan – was given back to the National Museum of Afghanistan on 21.6.2017. Few are the artefacts that find their way back home: a Japanese collector discovered the foot of Zeus on the black market and returned it to the Afghan state. In those provinces still beset by conflict, however, countless archaeological sites continue to be plundered

It is only in front of the beheaded Buddhas that he seems, for a moment, to wallow in melancholic memories. "What these men did has nothing to do with Islam," he adds, after explaining who the 'executioners' of the stone Buddhas were.

The museum also contains some finds from Bamiyan, home of the legendary giant Buddhas. They are among some of the smaller exhibits that escaped the destructive fanaticism and survived intact. "The whole world knows what happened to their big brothers," growls Noor Agha. In March 2001, Taliban fighters destroyed the Buddha statues in the Bamiyan Valley, one of Afghanistan's UNESCO designated World Heritage Sites. To this day, opinions are divided on whether Taliban leader Mullah Mohammad Omar personally gave the order for the destruction or not.

Many Buddhas have now landed on the black market and more than a few of them have found their way into private collections where the collectors aim to keep them. It is an open secret that high-ranking Afghan politicians are among the collectors. In those cases in particular, restitution appears problematic. In the past there has been repeated criticism that the necessary pressure to something about the situation has been lacking. Hardly surprising really, given that many of the people involved are members of the Afghan government. Rahimi is also rather reticent on this. "We're doing our best," he comments briefly.

Turning in his grave 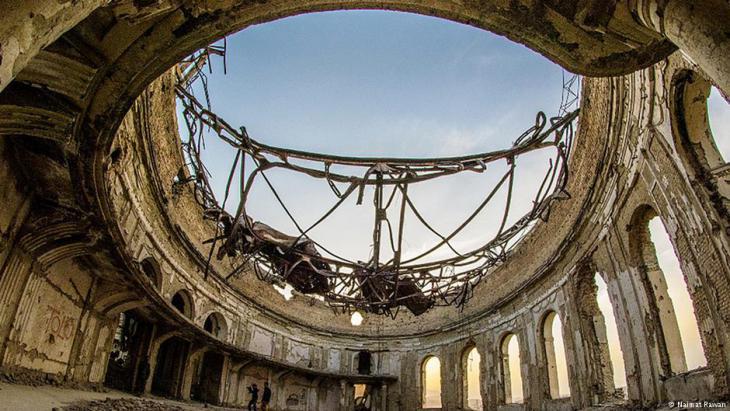 A metaphor for this war-torn country: plans are afoot to restore Kabul′s most famous ruin, the Darul Aman Palace. The Afghan parliament formally approved the proposal in May 2016. Reconstruction is scheduled to cost approximately 15 million euros and will take at least three years. The Palace has been earmarked to house among other things Afghanistan′s Supreme Court

"King Amanullah would turn in his grave," says Noor Agha. The aforementioned Amanullah Khan was regarded as a progressive ruler. He has left his mark to this day, not only in the museum, but also in the heads of many Afghans.

The nearby Darul Aman Palace, which German engineers and architects were also involved in, was also built under Amanullah's leadership. The palace, which was hit by numerous rockets during the war years and fell into ruin, is currently being restored.

In the 1920s, the Western-oriented Amanullah pushed through many reforms that were strongly opposed by the religious powers within the country. In the end, he was overthrown and driven out. "If he knew what was happening in his country today, he would probably burst into tears," says Noor Agha nostalgically.

Home
Print
Newsletter
More on this topic
The destruction of the Buddhas of Bamiyan: The iconoclasm of the TalibanAfghanistan Museum in exile: Art objects in boxesAfghanistan's Bactrian gold: An ancient heritage of diversity
Related Topics
Art, Islamic art, Taliban
All Topics

After coming to power, the Islamist group imposed a ban on girls' education, prompting some Afghans to set up an underground school. Hussain Sirat and Ahmad Hakimi spoke to some ... END_OF_DOCUMENT_TOKEN_TO_BE_REPLACED

As the Western world emerges from a holiday season made less festive by COVID-19, millions of children in Afghanistan are starting 2022 facing the prospect of famine, illness, and ... END_OF_DOCUMENT_TOKEN_TO_BE_REPLACED

Each year, thousands of people travel to the Turkish city of Konya to attend a week-long series of events and ceremonies that mark the death of the 13th-century Islamic poet, ... END_OF_DOCUMENT_TOKEN_TO_BE_REPLACED

Their exhausting escape from the Taliban took them from Kabul to Qatar, though European cities and U.S. military bases. But now this Afghan family has finally arrived in a small ... END_OF_DOCUMENT_TOKEN_TO_BE_REPLACED

The Pakistani Taliban, known by the acronym TTP, are regrouping and reorganising, with their leadership headquartered in neighbouring Afghanistan, according to a U.N. report from ... END_OF_DOCUMENT_TOKEN_TO_BE_REPLACED

END_OF_DOCUMENT_TOKEN_TO_BE_REPLACED
Social media
and networks
Subscribe to our
newsletter