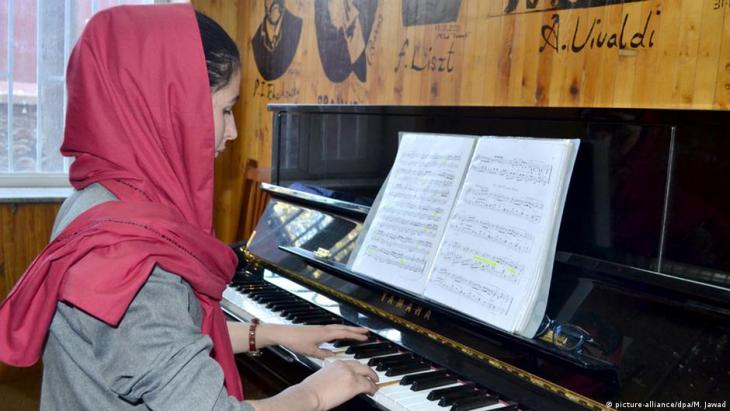 Afghanistan's government distanced itself from a recent plan to ban girls from singing in public after women's rights activists slammed education officials for promoting a "Taliban-like" policy. By Nasim Saber

The Afghan Ministry of Education has annulled a ban on public singing performances by girls over the age of twelve, which was announced on 10 March in Kabul. The capital's local education authority had issued the order without prior consultation with the ministry, it said.

Following criticism at home and abroad and an Afghan campaign on social media, the ministry issued a statement saying girls should retain the same rights as boys in the future. "The leadership of the Ministry of Education is committed to the right to education and grants the free choice of girls and boys to participate in cultural, artistic and sporting activities," the statement reads. It added: "The instruction issued by the Kabul Education Authority does not represent the official position and policy of the Ministry of Education."

Earlier, however, according to Thomson Reuters Foundation, the ministry had defended the Kabul local authority's edict, saying that parents had asked that their daughters be excluded from such public performances, and that schoolgirls had also complained they were being discouraged from learning by participating in such events.

Samira Hamidi, South Asia expert with Amnesty International, points out that the Afghan Ministry of Education is headed by a woman, Rangina Hamidi. She finds it "shocking" that a woman who occupies her position because of her commitment to women's issues could possibly back such a decision.

To the current minister of education @hamidi_rangina
I once read that you were 'one of the leading voices for Afghan women'. But I didn't know you would use your voice to shut down those of young Afghan girls.

We'd all love to hear the logic behind this. What is the goal? https://t.co/F0NaZYOV2f

Between modernity and fundamentalism

The Education Ministry's attempt to distance itself from the controversy comes after women's rights activists launched a social media campaign to denounce fundamentalism in Afghanistan.

Under the hashtag #IAmMySong, Afghan women and social rights activists shared video clips of girls singing hymns and songs, along with musical performances by Afghan women.

"The main reason for our protest is that songs and hymns are the voice of women. To silence the voice of women is to eradicate women from the public sphere. This directive is exactly like those rules that the Taliban issued during their supremacy," Afghan women's rights activist Vida Saghari explained.

Saghari said the singing ban wasn't the first time that the Education Ministry had issued "Taliban-style" directives. Near the end of 2020, the ministry announced that it would support Islamic madrassas that only teach the Koran. Saghari said the ministry also supported a plan to only allow girls from first to third grade to attend classes in mosques.

The Education Ministry also tried to walk back those decisions by claiming that learning in madrassas and mosques was meant as a solution for remote districts with no access to modern schools. 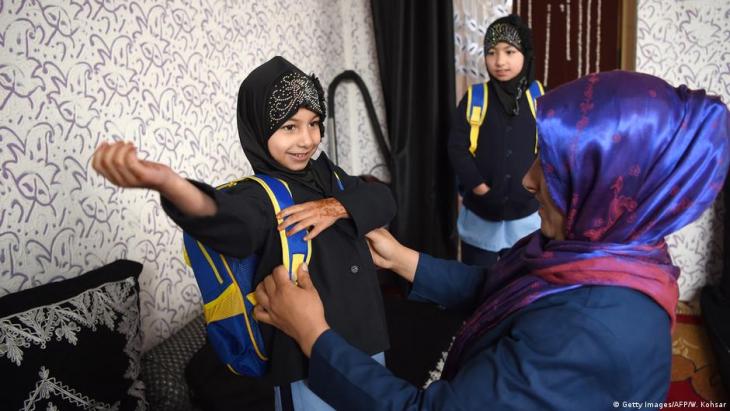 Green light for the Islamists? Afghan rights activist Robina Shahabi is convinced the Taliban will reintroduce traditionalist and fundamentalist structures into Afghanistan. She interpreted the singing ban on young girls as a first step in this direction. "This is happening at a time when the participation of the Taliban within the system is being discussed and a council of Islamic jurisprudence is being formed," said Shahabi. The council of Islamic jurisprudence is envisioned as a quasi-legislative body that promotes fundamentalist values. "We just seem to be going down the same road again"

For decades, Afghan women have struggled to be recognised as equals in a country often beset by fundamentalism.

Vida Saghari is dissatisfied with the government's latest U-turn; she sees misogynist forces still at work, which must be resisted. She said Afghanistan had a long and tragic history when it comes to women's rights. In the 1980s during the Islamist Mujahideen era, female singers were often silenced and then killed.

Fundamentalist positions are also embodied by the Taliban, although the militant group claims that its stance on women's rights has softened somewhat.

Samira Hamidi, a South Asia campaigner with Amnesty International, rejects the idea the Taliban has changed. "The position of the Taliban has not changed regarding women, the right of free expression, media and girls' education," Hamidi asserted. "They allow women to seek education, but only according to Islam and Sharia – and they have never explained what they mean by that."

Hamidi said the Taliban felt more emboldened than in previous years because the U.S. peace deal has given it more say in shaping Afghanistan's future. "The Taliban are coming from a position of power, and they have continuously said that they have won this war against the U.S. and that they don't recognise the Afghan government," Hamidi said, adding that pro-democracy and equal rights campaigners are being targeted by militants. 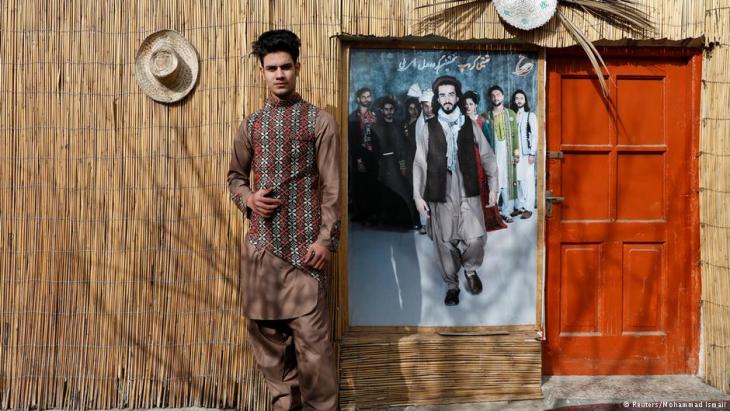 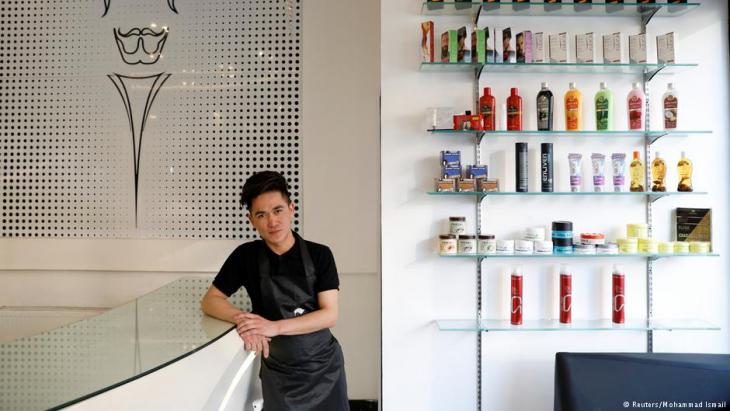 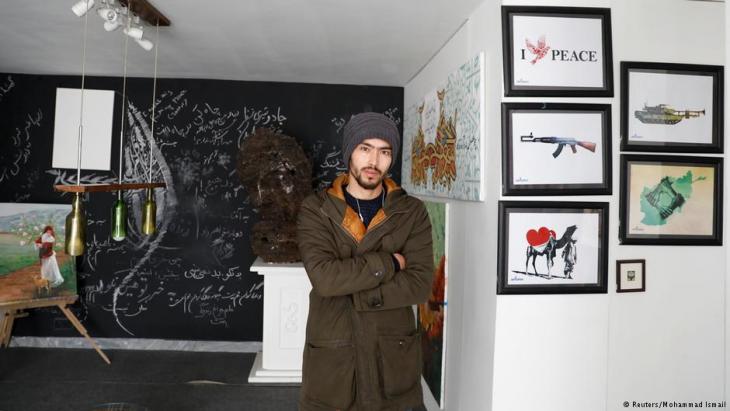 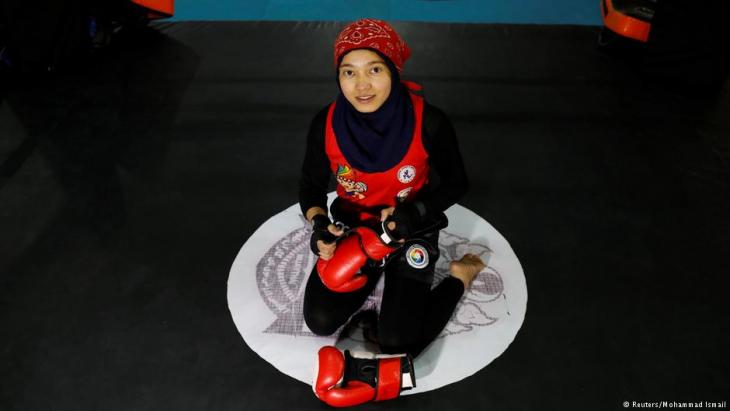 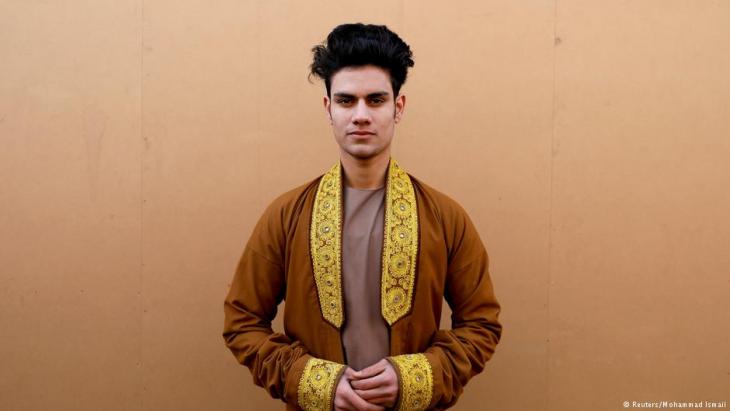 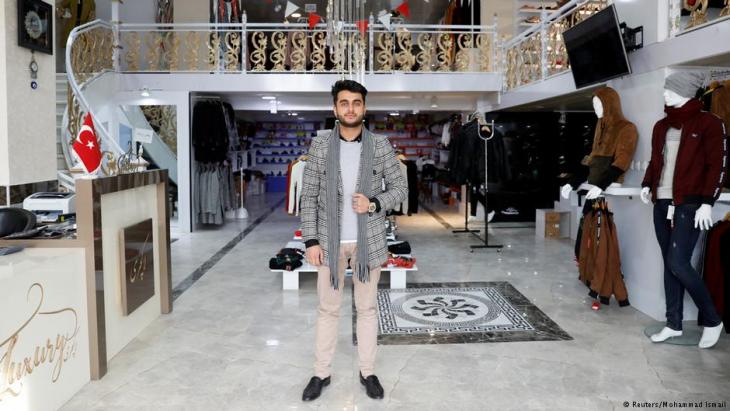 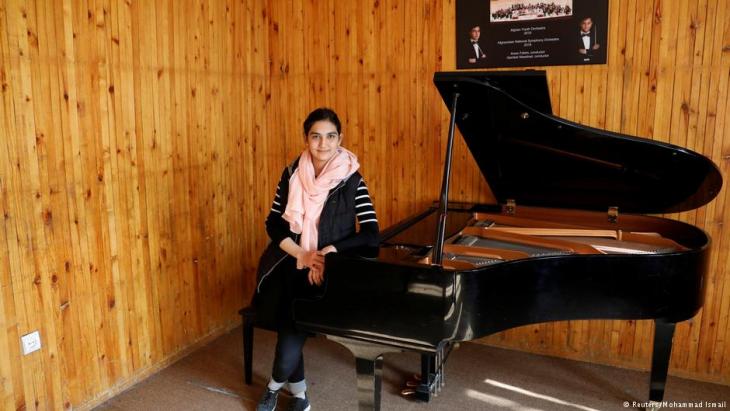 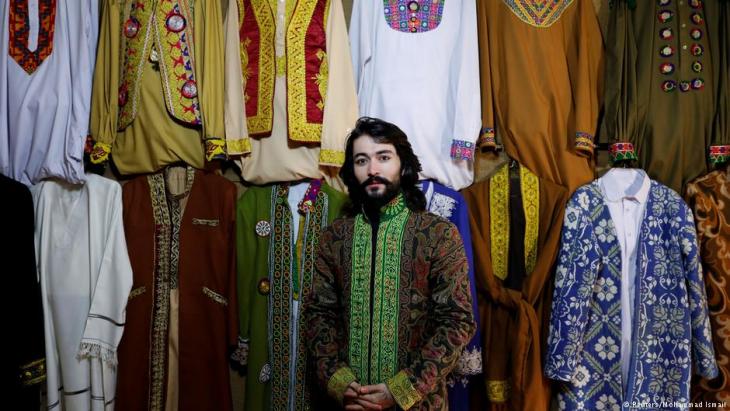 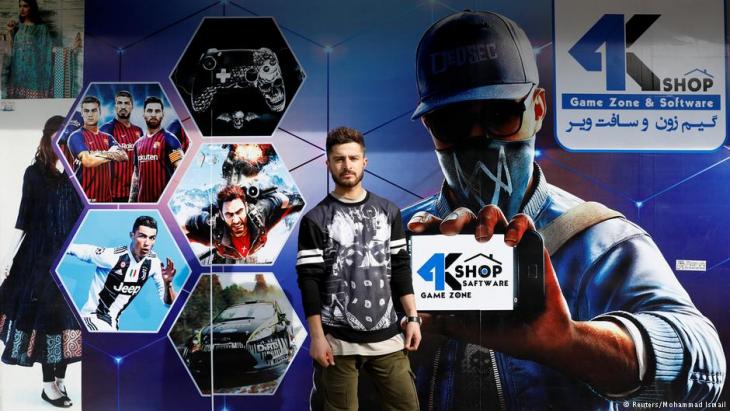 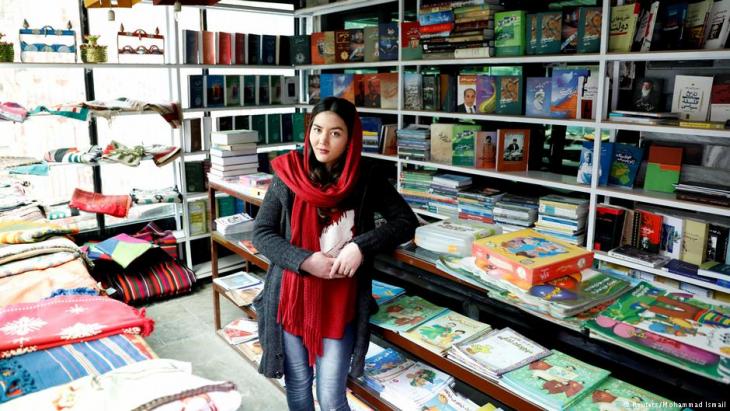 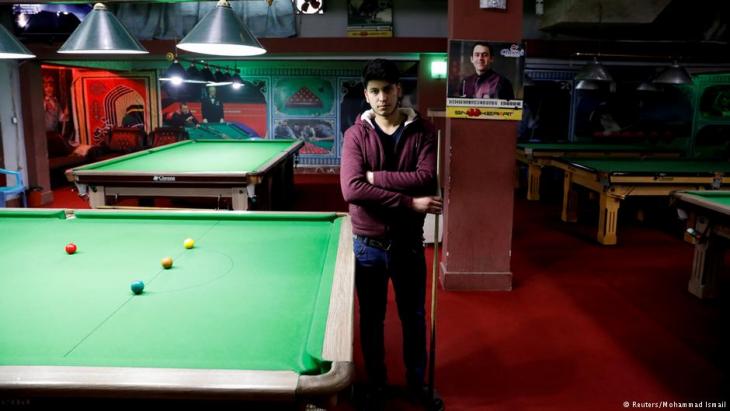 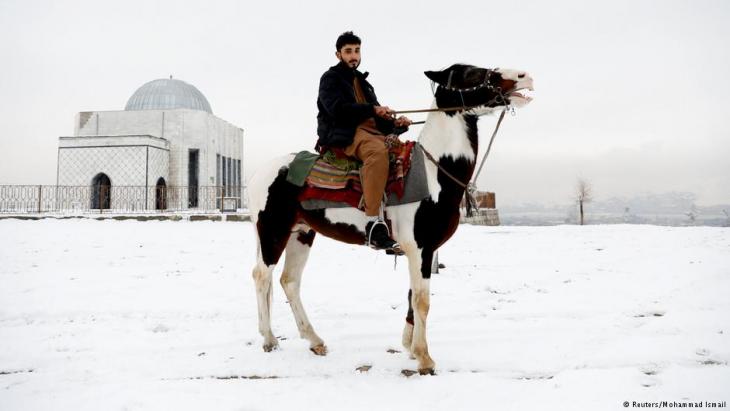 Afghan rights activist Robina Shahabi is convinced the Taliban would reintroduce traditionalist and fundamentalist structures into Afghanistan. Shahabi interpreted the singing ban on young girls as a first step in this direction.

"Ordinary people are already saying the [albeit] revoked ban on singing decree is a green light for the Taliban. This is happening at a time when the participation of the Taliban within the system is being discussed and a council of Islamic jurisprudence is being formed," said Shahabi. The council of Islamic jurisprudence is envisioned as a quasi-legislative body that promotes fundamentalist values. How the body is composed and what it will do will be discussed over several rounds of intra-Afghan negotiations.

Many ordinary Afghans fear the comeback of the Taliban. "My personal view and that of the friends I talk to is that this is all happening to suit the Taliban and their views. People believe the Taliban will return and now they are trying to make Islamic laws even more Islamic. This is exactly what happened in Iran from 1979 onwards. We just seem to be going down the same road again."

After coming to power, the Islamist group imposed a ban on girls' education, prompting some Afghans to set up an underground school. Hussain Sirat and Ahmad Hakimi spoke to some ... END_OF_DOCUMENT_TOKEN_TO_BE_REPLACED

As the Western world emerges from a holiday season made less festive by COVID-19, millions of children in Afghanistan are starting 2022 facing the prospect of famine, illness, and ... END_OF_DOCUMENT_TOKEN_TO_BE_REPLACED

Each year, thousands of people travel to the Turkish city of Konya to attend a week-long series of events and ceremonies that mark the death of the 13th-century Islamic poet, ... END_OF_DOCUMENT_TOKEN_TO_BE_REPLACED

Their exhausting escape from the Taliban took them from Kabul to Qatar, though European cities and U.S. military bases. But now this Afghan family has finally arrived in a small ... END_OF_DOCUMENT_TOKEN_TO_BE_REPLACED

The Pakistani Taliban, known by the acronym TTP, are regrouping and reorganising, with their leadership headquartered in neighbouring Afghanistan, according to a U.N. report from ... END_OF_DOCUMENT_TOKEN_TO_BE_REPLACED

END_OF_DOCUMENT_TOKEN_TO_BE_REPLACED
Social media
and networks
Subscribe to our
newsletter