Skip to main content
Afghanistan as a Travel Destination

A Mixture of Hospitality, Humour and Brutality

A plethora of new books on Afghanistan have recently been released on the German and English-language markets. Two of them, surprisingly, deal with travel and tourism in the land of the Hindu Kush. Martin Gerner introduces the books 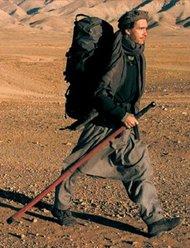 Hoofing it in Afghanistan: Next to the Lonely Planet travel guide, the Scotsman Rory Stewart also explored Afghanistan as a travel destination

​​Is this the time to be visiting Afghanistan as a tourist? Yes, says the new travel guide from Lonely Planet. "You'll find Afghanistan a truly rewarding country," claims author Paul Clammer, adding: "it's an addictive country to visit." But both the author and Lonely Planet are wary of encouraging foolhardy adventure-seeking.

Lonely Planet is investing in a travel guide at a time when, thanks to kidnappings, attacks, bombing and organized crime, Afghanistan is now more dangerous than for several years. Despite this, establishing a tourist infrastructure was one of the stated aims of the last Afghanistan conference in London.

The best place to travel is above the imaginary line from Herat, in the west, to Kabul, in the east. The former "hippy trail", travelled by thousands of flower children in the early seventies, remains the "perfect introduction to Afghanstan".

​​The listings include various organizations offering training courses for war zones and crisis areas. Even more important are sources for daily updates on the local security situation. The guide is faced with a dilemma here as some of the most useful information is only accessible to people who already have good contacts to relief organizations, security forces and locals.

If you are not part of this network, you might try your luck with one of two Afghan tour operators. The tours are mostly for small groups, travelling with an armed bodyguard in a Landrover. The Afghan tour services are usually available only on request. Last October was a particularly slack period.

Afghanistan is one place where travel insurance seriously beckons. Several specialist companies are listed. Here too you should read the small print. Insurers are keen to offer packages and you are advised to inquire into the details.

The list of "dos and don'ts" is very helpful: always eat with the right hand, don't blow your nose in the company of other people and for your own safety be flexible about how you enter and leave your hotel.

Although it is not compulsory for female visitors to wear a headscarf in Afghanistan the authors note that female travellers with uncovered heads can easily cause displeasure.

A Scot and his toothless mastiff

The chapter "Working in Afghanistan" is aimed particularly at current and future relief workers. Otherwise it is mostly older people who visit Afghanistan, largely from the English-speaking world.

​​The Places in Between features a Scot, still comparatively young; Rory Stewart travelled the central Afghan highlands at the beginning of 2002 by foot. At the time the Taliban had just been toppled and the sound of bombing from Tora Bora was just dying away. Today Stewart's journey would be less plausible, impossible indeed, however his travel account has just been published in German.

Stewart is in his mid thirties. A diplomat's son, he was born in Hong Kong and has an OBE. His career is an astonishing mixture of years spent travelling around Pakistan, Iran and Nepal, and diplomatic missions on behalf of the British government in Iraq and the Balkans. He was granted admission to Afghanistan along with hordes of journalists and relief workers, waiting impatiently to do their bit following the US bombardments.

Stewart started in Herat. Along the way he succeeded in shaking off the security escort provided for him by Governor Ismail Khan, but at the end it became clear that the escort had been offered for a reason. At the gates of Kabul, thanks to his six-week beard and dusty clothes, he was suspected of being an Al-Qaida sympathizer. 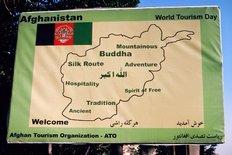 Official poster for Afghanistan's World Tourism Day. In 2007, predictably, the development of the tourism sector remained below expectations of Afghanistan's Tourism Organization, ATO

​​Stewart cocks a snoop at the throngs of internationals who he claims know little about Afghanistan. He sees today's post-conflict "experts" as less experienced than the nineteenth-century colonial officials who he says at least made a serious effort to understand the people they were governing. Now he sees an interventionism at work in Afghanistan which ignores cultural differences.

A British man in a country the British have conquered and overruled many times during the colonial past, Stewart, describes the everyday hardship in the villages and a society he characterizes as composed of an unpredictable mixture of etiquette, humour and extreme brutality.

If the book remains a somewhat qualified declaration of love to Afghanistan, it is dedicated unreservedly to his toothless mastiff Babur, who accompanied him in a culture in which dogs are otherwise reviled.

The author shows us his "lonely planet"; the fulfilment of a childhood dream and a journey in search of himself.

Rory Stewart now works in Kabul and is part of the same international establishment which he describes so disparagingly. His Turquoise Mountain Foundation has millions at its disposal for the rebuilding of the country: a chance to prove that he can do it better?

Interview with Roger Willemsen
"There Is Great Hunger for Peace in Afghanistan"
The journalist and documentary-maker Roger Willemsen visited Afghanistan twice in 2005. He spoke to people from across the political spectrum, and to artists, drug barons and traumatised individuals. Homeira Heidary met him

Maliha Zulfacar, Afghanistan's Ambassador to Germany
"People in Afghanistan Need More Tangible Changes"
Maliha Zulfacar is one of two female Afghan ambassadors. In this interview with Martin Gerner, she talks about her unusual career, as well as about NATO's military strategy, and the reconstruction process in Afghanistan