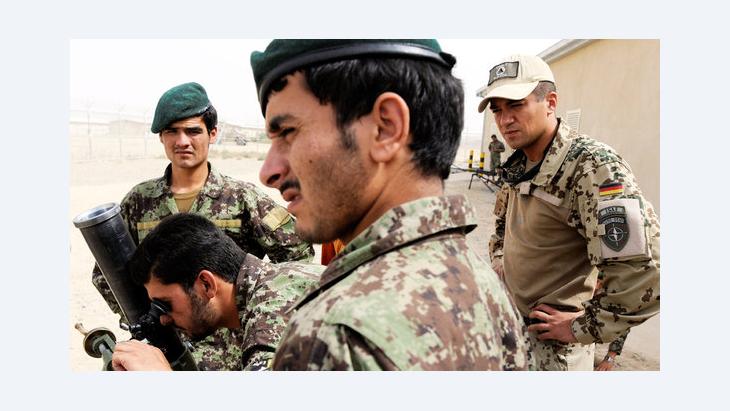 Afghanistan as the Western Troop Withdrawal Nears
The Failure of Dialogue

﻿The end of the NATO mission in the Hindu Kush, scheduled for 2014, is fast approaching. The results to date are sobering. Mistrust and even mutual dislike between locals and representatives of the West in Afghanistan are striking and widespread. By Stefan Buchen

The German Armed Forces are gradually pulling out of Afghanistan, as are the military forces of Germany's Western allies. This does not signify a military defeat. The ISAF troops, with their air sovereignty, their isolated, strongly fortified camps, and their armoured patrol vehicles, are hardly vulnerable, let alone capable of being militarily beaten by the Afghan insurgents.

The defeat in the Hindu Kush being suffered by Germany and the Western alliance is not military, but political in nature. The intervention began more than 11 years ago. It was meant to liberate Afghanistan from the clutches of the Taliban and al Qaida, bring long-term peace, stability, and prosperity to the country, and create the foundation for the democratic rule of law. In addition, women were to be freed from male subjugation.

Apart from the overthrow of the Taliban and the expulsion of al Qaida from Afghanistan, the attempt to achieve the above stated goals has failed from the very start of the whole endeavour and the results can only be characterized as destructive. After more than 11 years of the NATO deployment, the country is not safe. Whenever the ISAF armoured vehicles do dare to leave their compounds, it is only to race at high speed through cities and villages in fear of attack. The contrast is striking – high-tech equipment zooming past poverty-stricken mud huts without electricity or running water.

Unpopular and without authority

Hamid Karzai, installed in his post by the West, is still president of Afghanistan. He was confirmed in office through two elections. At the very least, the second presidential election in 2009 was marked by massive fraud. Karzai cannot stand for a third term, but his critics accuse him of wanting to install one of his brothers as successor in the 2014 election – the same time at which Western troops will be pulling out. 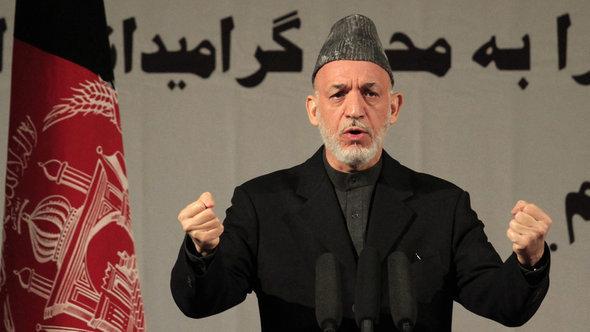 Kabul's less-than-democratic ruler: According to the "International Crisis Group", President Karzai is more interested in maintaining power than in the credibility of the political system and the long-term stability of the country. In addition, the experts concluded that Afghanistan could plunge into civil war and disintegrate following the withdrawal of international troops in 2014

​​The Karzai government is unpopular and lacks any authority. It is far from controlling all of the country's provinces. The political misery is accompanied by economic hardships. Despite all of the international programmes to combat narcotics, raw opium remains the country's single top export. The area under opium poppy cultivation has reached a record high this year.

Otherwise, agriculture is doing badly. Afghanistan is pitiably unable to feed its own population, let alone produce goods for export, such as pistachio nuts. Food must be imported. And there is not enough for everyone. Hunger is a problem.

International companies, especially those from China and the USA, are concerned about ensuring mining rights for the country's raw materials, such as copper. Yet, actual mining has yet to begin, so no local jobs are on offer.

The Afghans are asking themselves what will happen after 2014. The rebels consist of widely diverse groups, yet the tone is set by a reinvigorated Taliban, making vast sections of the country insecure. Their war against the Karzai government is financed through the drug trade. In addition, the Taliban receive support from Pakistan. Will they be able to overthrow the central government in Kabul after the departure of NATO troops?

From the Western viewpoint, the problem is that dialogue with the Islamic world – the key theme of this Internet portal – is simply not functioning. The dialogue approach was devised by the former German Social Democrat-Green coalition government as a response to the terrorist attacks of 11 September 2001 and then first tested in practice in Afghanistan. 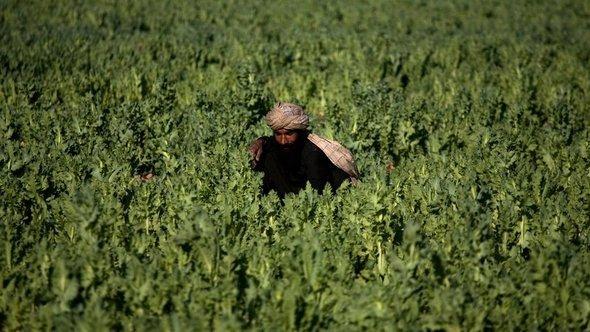 Flourishing drug cultivation: Despite all of the international programmes to combat narcotics, raw opium remains the country's single top export. The area under opium poppy cultivation has reached a record high this year

​​Ten years ago, German soldiers were inspired by their mission to help the country rebuild itself in a new era. Today, one instead encounters soldiers like Camp Commander G. from the ISAF camp near Mazar-e Sharif. The German officer can only express his joy at the fact that he will be leaving the country in two weeks.

After the withdrawal of the ISAF troops, the Afghans will have to see to it "that they can make do on their own," he says. He looks back upon the deployment with a large dose of cynicism. The Afghans missed their opportunity "to achieve something with foreign assistance." He puts full blame on the local population.

"Afghanistan is the Middle Ages plus mobile phones," says G., summarizing his experiences. Then he gives a warning to those Afghans wanting to threaten the world again in the future. "Afghanistan is surrounded by mountains and has no access to the sea. If we have to, we could encircle the country and cut if off from the rest of the world."

One may ask again if it was right to lay the emphasis of the German and Western engagement in Afghanistan on the deployment of military forces and, by contrast, to skimp on the civil reconstruction of the country. If the emphasis had been reversed, perhaps the "dialogue" would have gone better. As such, the engagement has delivered a sobering result. Mistrust and even mutual dislike between locals and representatives of the West in Afghanistan are striking and widespread.

"We Afghans can only help ourselves"

"Every attack by NATO troops that results in victims only fuels hatred towards foreigners," says Ahmadjan M., an official with the Food and Agriculture Organization of the United Nations (FAO) in Mazar-e Sharif. According to his assessment, nothing good could ever come from this encounter with armed emissaries of the West. "We Afghans can only help ourselves," he believes. The man is an ethnic Pashtun. 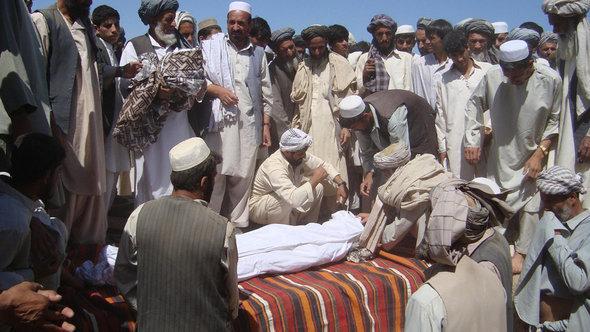 Civilians in the firing line: Time and again, the civilian population has been the victim of military operations between NATO troops and the rebel Taliban. Most recently, in early April, many civilians were killed, including eleven children, during a NATO attack in Kunar Province in eastern Afghanistan

​​In conversation, he stresses the ethnic fragmentation of his country. He accuses the West of having discriminated against the Pashtuns, "the real Afghans" as he puts it, in their attempt to restructure the country. He claims that this has led to strong feelings of resentment among members of the largest of Afghanistan's ethnic groups.

In fact, the Taliban religious movement has, in a way, become a sort of powerful voice for the Pashtun people, who, in turn, provide practically the sole recruits for the movement. Today, the ethnic division of Afghanistan into a predominantly Pashtun south and east and a mainly Tajik and Uzbek north is more pronounced than ever before. The country's cohesion is seriously under question.

Germany is more involved in the north of the country, where its army has been stationed since the beginning of the deployment. In order to promote "dialogue" with the Afghans, the German army set up a radio station called "Voice of Freedom" (Sedaye Azadi). On behalf of Germany, Afghan journalists broadcast news across the country, presenting the Karzai government as well as the foreign presence in as favourable a light as possible. Tellingly, the station was recently renamed "Bayan-e Shomal," freely translated as "Northern Afghanistan Radio."

Mitra M. works as a presenter at the station. She regards the work as a real opportunity. Yet, she prefers not to let her relatives or those in her neighbourhood know about her job. "Most people don't look highly upon anyone working for foreigners," explains the young woman.

She is very concerned about life after the withdrawal of foreign troops. "I am worried that some people will seek revenge against those who cooperated with foreigners," she says. "And women will be the most vulnerable."

Mitra hopes that the German government will, at the very least, offer her the possibility of emigrating to Germany when its troops leave. Sharing her fate are some 1,700 Afghans working for the German army and other German employers. They include drivers, translators, and security personnel. Many of them have already received threats from opponents of the foreign military mission.

"Collaborators with the enemy"

In contrast to the USA and other countries in the ISAF mission, Germany has not initiated a visa programme for its Afghan staff. The German government has merely promised to examine all individual cases in which staff fear for their security after the troop withdrawal.

The fate of Germany's Afghan staff serves to illustrate the dilemma posed by the withdrawal. If they are left behind, they may be subject to retaliation by extremists. If, on the other hand, they are taken along to Germany in 2014, this would be a clear admission that the deployment was a failure. What other conclusion could be reached if, after a 13-year-long military deployment, local staff has to be moved abroad because a segment of the population view them as "collaborators with the enemy"?

Officer G. from the ISAF field camp near Mazar-e Sharif has a clear answer to this dilemma. "The Afghans should stay here. Whoever claims to be personally threatened is simply lying. In Afghanistan, they can tell you tales from 'A Thousand and One Nights' the whole day long."

Home
Print
Newsletter
More on this topic
Interview with Fawzia Koofi: ''It Is Not A Matter of Overnight Change''Ten Years of Intervention in Afghanistan: Not As It Should BeAfghanistan's Mineral Reserves: A Treacherous Blessing
Related Topics
Al-Qaida, Dialogue of Cultures | Intercultural Dialogue, Hamid Karsai, Human rights, International terrorism, Islamism | Political Islam, Jihadism | Jihadists, Taliban, Women in the Islamic world
All Topics

One year ago the Taliban returned to power, seizing Kabul; the U.S. and its allies made a panicked exit from the country. Of all the books written on the subject, four stand out ... END_OF_DOCUMENT_TOKEN_TO_BE_REPLACED

Jonas Poher Rasmussen's Oscar-nominated animated documentary “Flee” focuses on the life of a refugee from Afghanistan. Based on a true story, it centres around the question: when ... END_OF_DOCUMENT_TOKEN_TO_BE_REPLACED

The Biden administration could have used Pakistan’s economic crisis to compel the country to sever its longstanding ties to terrorist groups. Instead, the U.S. protects and ... END_OF_DOCUMENT_TOKEN_TO_BE_REPLACED

No country in the Islamic world is influenced as strongly by the traditions of Sufi culture as Pakistan. Yet the Sufis there have been under attack from Islamic hardliners for ... END_OF_DOCUMENT_TOKEN_TO_BE_REPLACED

On 15 August 2021 the Taliban overthrew the government in Afghanistan and seized power. One year later, the country is facing multiple challenges that demand immediate global ... END_OF_DOCUMENT_TOKEN_TO_BE_REPLACED

Salman Rushdie's "Shalimar the Clown" is a furious tale about a lost paradise. In this interview with Lewis Gropp, Salman Rushdie talks about how the Indian army and militant ... END_OF_DOCUMENT_TOKEN_TO_BE_REPLACED
Author:
Stefan Buchen
Date:
Mail:
Send via mail

END_OF_DOCUMENT_TOKEN_TO_BE_REPLACED
Social media
and networks
Subscribe to our
newsletter