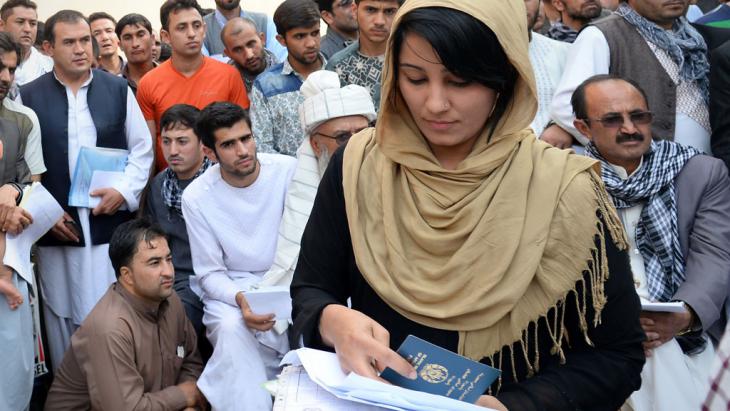 Afghanistan: the Taliban′s Kunduz offensive
"There's nothing left to keep me here"

The security situation in Afghanistan continues to escalate. After bitter fighting in Kunduz, the mood is also tense in Kabul. Meanwhile thousands of Afghans are leaving the country every day. Impressions from Kabul by Emran Feroz

Mustafa runs a small grocery shop close to the famous Darul Aman Palace in Kabul. Although business was still good a few years ago, this is no longer the case. "Everything has become more expensive. Many people quite simply can't afford it," the grocer complains.

Mustafa opened his shop when Hamid Karzai was president of Afghanistan. Mustafa remembers him with a fond nostalgia: since Karzai left office, it seems, the problems have stacked up. "Ghani has destroyed my business," says Mustafa. Ashraf Ghani took over the presidency about a year ago. The West celebrated the scenario as "Afghanistan's first democratic transfer of power".

But since then, not only have the people become poorer, the security situation has taken a dramatic downturn. The UN says at least 5,000 civilians were killed in the Hindu Kush in the first half of 2015 alone. The responsibility for this lies not only with the Taliban, but also with the Afghan army and militia loyal to the government.

Battles between the warring parties are moving closer to the capital by the day. There are more frequent attacks in Kabul itself. The influence of the Taliban is growing. "They are already in the area where my milk comes from," Mustafa insists.

The Islamists have claimed numerous successes in recent weeks. Just a few days ago, Taliban fighters took the capital of the northern province of Kunduz in a lightning operation. Some 500 fighters were enough to hound out 7,000 police officers and soldiers from the Afghan army. The Taliban subsequently put on a propaganda show of their victory. Among other things, they ran up their white flag on the city's main square.

The blame for Kunduz is being laid fairly and squarely at President Ghani′s feet. Dozens of people have been gathering in recent days outside his presidential palace, demanding his resignation. Although the Afghan army launched a counter offensive soon afterwards, trust in the government had already been shattered. 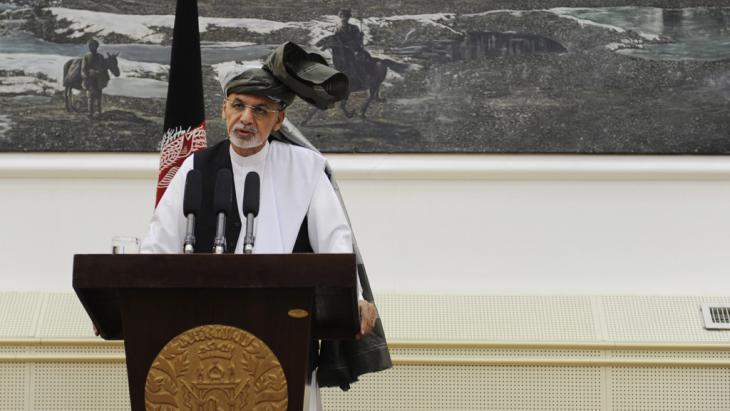 Afghanistan′s president on the defensive: there has been a huge increase in the number of Taliban attacks since their summer offensive. Their greatest success to date came at the end of September, when hundreds of their fighters overran the capital of Kunduz. Not so long ago, it was German troops who were responsible for keeping the peace in the province

Observers had all the while been predicting the Taliban capture of Kunduz. "In the last two years, the Taliban have slowly but surely extended their influence in the regions around Kunduz. They also controlled neighbouring districts in the provinces of Baghlan and Takhar," says political scientist Jason Lyall of Yale University. The rebels were also able to exploit weak local political structures and popular discontent. "The Taliban exploited the absence of the weak central government in Kabul as well as the existence of corrupt and violent militia to recruit from the population and present themselves as the better alternative," emphasises Lyall, who is an expert on Afghanistan.

Furthermore, over the course of the conflict, the government in Kabul pursued a policy of escalation and disinformation. Shortly after the fall of the city, for instance, it issued a statement that it had "everything under control". At the same time, the Taliban posed on social networks with captured weapons and vehicles. Coverage by Afghan mainstream media also came in for some criticism. "The media did not think through their response – instead they descended1 immediately into hysteria. Nor did they shy away from disseminating deliberately incorrect reports, which further stoked the sense of popular outrage," says Modaser Islami, a political activist from Kabul.

"All the indications point to a war crime"

The fighting in Kunduz reached a turning point after a Medecins sans Frontieres (MSF) hospital was bombed by US fighter jets. NATO forces had already previously dropped bombs on Kunduz. Reports from Kunduz say numerous civilians were killed in these attacks. In the MSF hospital, the only clinic in the region equipped to treat serious injuries, at least 22 people lost their lives, with many others left badly injured. The victims included patients, members of the hospital staff, as well as a journalist working for a local radio station.

After the US army media spokesman initially spoke of an attack on "hostile individuals" and "possible collateral damage", the Americans then underlined that the air attack had been requested by Afghan forces stationed locally.

Local Afghan politicians had previously blamed the Taliban for the massacre and claimed the rebel fighters had been using the hospital as a base. MSF sharply rejects this accusation and describes this as a war crime. "Whichever way you look at it, all the indications point to a war crime. After all, even if Taliban fighters had been present in the clinic, international humanitarian law prohibits any kind of attack on a hospital if there patients and staff are inside," asserts Thomas Ruttig, founder of the Afghanistan Analysts Network (AAN). 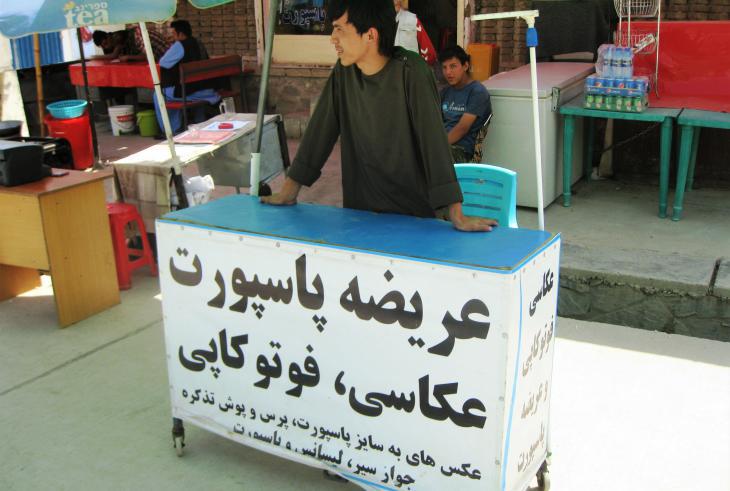 "I don't have the money to leave," says Reza, who keeps his family above water selling passport photos and photocopies close to the passport office. Then he adds with a smile, "It may look bad, but we can only hope that the situation will improve at some point"

Currently, it is still not clear who is in control of Kunduz. While the government in Kabul recently claimed yet again it had recaptured the city, the Taliban continues to issue statements to the contrary. But even if it has lost the city, the Islamists have nevertheless achieved a symbolic victory. The hospital bombing also plays into the hands of the group. "It can be assumed that this attack will stoke feelings of antipathy towards Western occupiers within the populace," says Waheed Mozhdah, a political analyst based in Kabul.

The latest events in Kunduz and elsewhere will further intensify the waves of refugees from Afghanistan. More than 10 percent of the entire Afghan population is still on the run. After people from Syria, Afghans represent the largest group of refugees in Europe. Many people are initially leaving the country legally, to subsequently reach Europe via known refugee routes.

For a while now, it has not been possible to leave Afghanistan legally without a new biometric passport. This is why long queues form daily outside the passport office in Kabul. The authority says it processes 2,000 applications on average every day. The prevailing sense is that a mass exodus is taking place.

"There's nothing left to keep me here," says Faisal, a young student from Kabul. Like many others, he is not only fleeing war and destruction, but also omnipresent corruption. According to the NGO Transparency International, Afghanistan is still one of the most corrupt nations in the world. "Regardless of what you do here, without the right connections you won't get a job," insists Faisal. He is hoping to reach relatives living in Sweden.

At the same time, the poorest of the poor are left to their own devices. "I don't have the money to leave," says Reza, who keeps his family above water selling passport photos and photocopies close to the passport office. Then he adds with a smile, "It may look bad, but we can only hope that the situation will improve at some point."

One year on from the Taliban's return to power in Afghanistan, some cracks are opening within their ranks over the crucial question of just how much reform their leaders can ... END_OF_DOCUMENT_TOKEN_TO_BE_REPLACED

"Flugt" is the world's first museum dedicated to the stories of those forced to flee. The new museum, which focuses on the fates of refugees then and now, is housed in a former ... END_OF_DOCUMENT_TOKEN_TO_BE_REPLACED

Foresight is needed to turn the tide of German policy. Being independent of Russia must not lead to dependence on authoritarian regimes in the Middle East. By Kristin Helberg END_OF_DOCUMENT_TOKEN_TO_BE_REPLACED

Rumi's poems, though generally stripped of their Islamic symbolism, are hugely popular around the world. Yet Islamic mysticism is still very much at the heart of these verses. ... END_OF_DOCUMENT_TOKEN_TO_BE_REPLACED

Very different Western reactions to the suffering in Ukraine and the Arab world show that there is a profound rift among cultures. Essay by Michael Young END_OF_DOCUMENT_TOKEN_TO_BE_REPLACED
Author:
Emran Feroz
Date:
Mail:
Send via mail

END_OF_DOCUMENT_TOKEN_TO_BE_REPLACED
Social media
and networks
Subscribe to our
newsletter