A current exhibition in Amsterdam is showing visitors a very different, unfamiliar image of Afghanistan. The 250 archaeological objects on display shine a light on the former glory of Afghanistan's ancient ruling dynasties. Nasim Saber reports

Aphrodite of Bactria: a unique synthesis of ancient Greek, Persian, and Indian influences

​​A Bactrian Aphrodite with angels' wings and an Indian marriage mark on her forehead; a fold-away, mobile crown of pure gold that once belonged to a nomadic princess; a theatrical gargoyle mask that spewed water from the ancient river Oxus (now known as the Amu Darya) from its mouth around 2,000 years ago; simple Corinthian capitals; and Greek and Buddhist statues … all of this is on display in Amsterdam's Nieuwe Kerk.

In terms of its significance and size, the Bactrian hoard is on a par with the objects found in the burial chamber of Tutankhamun in Egypt. It comprises more than 20,000 individual pieces and is evidence of the highly advanced Bactrian civilisation that thrived in the area that is now known as Afghanistan.

Following Alexander the Great's campaign, an increasing number of Greeks and Macedonians were drawn to the ancient culture of Bactria, where they founded their own very advanced culture. Nomadic people from Central Asia, the Kushans, later secured power, settled down, and even adopted the Greek alphabet, which they henceforth used to write in their own language, Bactrian.

As a result of their control over this strategically important region and part of the Silk Route, the Kushan lords became incredibly rich. The blending of cultures was reflected in the goldsmiths' furnaces and took on an astonishingly delicate, yet complex form. The synthesis of nomadic Central Asian, Hellenistic, Iranian, and Indian cultures is reflected in the variety of motifs decorating the exhibits in Amsterdam.

The years of Soviet occupation

The exhibits travelled a very long way before reaching Amsterdam. The Bactrian hoard was discovered exactly 30 years ago to the north of the Hindu Kush by a team of Greek and Soviet archaeologists headed by Victor Sarianidi. The hill where the treasures were discovered has been known as Tilla Tepe (Hill of Gold) ever since. 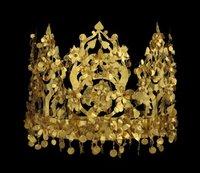 Gold Crown, 1st–2nd century CE, from a grave in Tillya Tepe, surveyed in 1979 by the Soviet-Afghanistani mission of archaeologists led by Victor Sarianidi

​​The Tilla Tepe hoard remained in Kabul once it had been examined and catalogued by the Soviets in 1978. A year later, the Red Army invaded Afghanistan; the occupation lasted a full decade. The Communist regime held onto power in Kabul for four years after the withdrawal of the Soviet Army. Countless art treasures were stolen in the years of Soviet occupation.

Following the collapse of the regime, fighting broke out between rival Mujahidin factions in 1992; Kabul, the country's capital, was reduced to rubble in the ensuing conflict. The fighting was accompanied by plundering and horrific war crimes on all sides; art thieves sold an increasing number of Afghan objets d'art abroad. The Taliban took to the political stage in 1994, taking control of the capital two years later. It seemed as if the hoard, which had been in Kabul since its discovery, was lost forever.

Hope returned and grew with the toppling of the Taliban regime: rumours spread that the treasure was safe and in good condition. The rumours proved correct: the treasures were presented to the world in 2004, their authenticity having been checked and confirmed by the Russian who had discovered them, Victor Sarianidi.

Hidden in the vaults of the presidential palace?

It is said that the hoard had been in the vaults of the National Bank directly underneath the presidential palace the whole time. Dedicated employees at the Afghan National Museum risked their necks to ensure that these works of art were kept safe and the hoard intact. 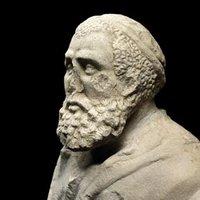 ​​The head of the Afghan National Museum, Omara Khan Massoudi, was presented with the Prince Claus Award (named after Queen Beatrice of the Netherlands' German-born prince consort who died in 2002) for his efforts to keep these and other national treasures safe.

After stints in Paris and Turin, the exhibition of Bactrian artefacts will be open to the public in Amsterdam's Nieuwe Kirk until 20 April 2008. From Europe, it will move to the United States, where it will go on display in several cities. It is to be welcomed that the initiators of this exhibition – several French, Italian, and Dutch museums as well as a number of foundations – took it upon themselves to show a very different, unfamiliar side to Afghanistan.

Afghanistan's ancient glory throws a fascinating new light on a country that was a cradle of civilisation and a melting pot of both cultures and precious metals. However, this past glory cannot shine so bright as to obliterate the tough reality of life in Afghanistan in 2008. The risk is simply too great that the country could sink back into chaos and that in the resultant disruption, these artefacts would be seen for their material value only and lost forever.

Afghanistan Museum in Exile
Art Objects in Boxes
Cultural treasures of various origin were stored in the Afghanistan Museum in Switzerland during the country's long civil war. Now the objects are being packed up again to be shipped back to the National Museum in Kabul. Aslan Khassan reports

END_OF_DOCUMENT_TOKEN_TO_BE_REPLACED
Social media
and networks
Subscribe to our
newsletter